ROCHESTER, Minn. — As the final seconds ticked off the clock and hope began slipping away, an eerie silence washed over the Eastfield bench. Sophomores D’Angelo Smith and TaMarcus Butler sat with their jerseys covering their eyes and their head in their laps as they watched their promising season come to an end.

The Harvesters fell one game short of a shot at a national championship Friday after losing 93-87 to the No. 2 seed Mohawk Valley Hawks in the NJCAA Division III Final Four. 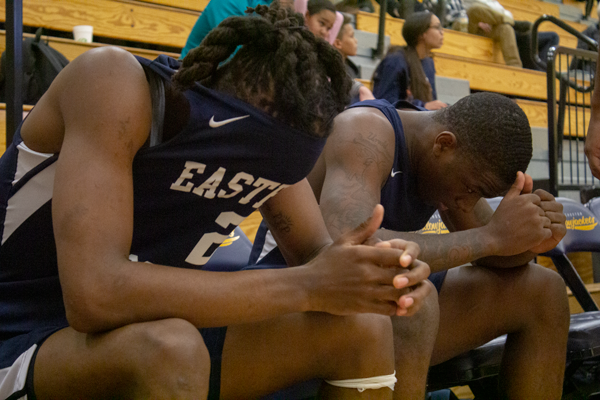 Guard TaMarcus Butler, left, and forward D’Angelo Smith sit on the sideline seconds before the game ends with their heads hung down. Photo by Skye Seipp/The Et Cetera

It was an emotional scene in the locker room following the game as several players had tears in their eyes and sat quietly. During the team’s last prayer together, sophomore, Xavier Benson choked up while sharing his last words as an Eastfield captain.

“We came all the way, that far, and we just didn’t do it,” Smith said. “That type of stuff hurts. For everybody to play their hardest and still not do it, that hurts. I feel like we should have won it.”

Smith led Eastfield with 26 points and 21 rebounds and was named to the all-tournament team, while guard DaJuan Ridgeway put up 21 points of his own.

The Harvesters trailed for much of the game before making a late run in the waning moments, but by then it was too late.

“We fought hard,” Butler said. “With all the ups and downs we had this season, all the losses we had, we faced adversity. We built off that from early in the season, and it got us here.”

In the second half, the Hawks found holes in Eastfield’s defense. 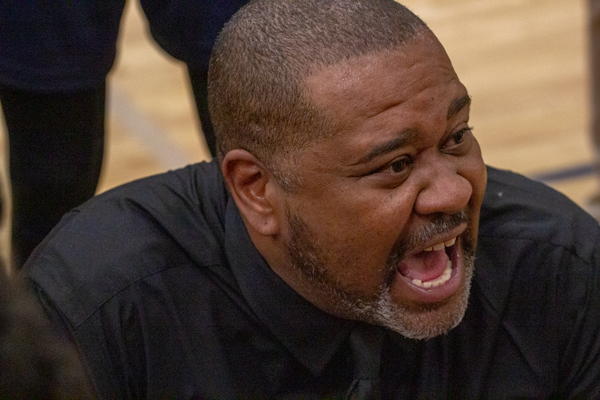 Coach Anthony Fletcher yells at his players during a timeout in the second period in an attempt to get them to rally back. Photo by Skye Seipp/The Et Cetera

The game started off neck and neck. In the first half, Mohawk Valley came out strong with a run-and-shoot game plan. They showed good ball movement, set well-executed screens and hit several shots from behind the arc to quickly grab the lead.

The Harvesters didn’t shoot well from 3-point range in the first half, only managing 28.6 percent, but they managed to keep pace with a ground-and-pound style where they charged the hoop and fought for every basket.

The Hawks held a 22-12 lead about halfway through the first half. Then, toward the end of the first, the Harvesters began applying more pressure. They got into the Hawks shooters’ faces and challenged their attempts around the perimeter. Slowly, they began to crawl back in it, and by halftime it was a tight game at 49-46 in Mohawk Valley’s favor.

“It was do or die,” Fletcher said. “We had to turn up the intensity and make them feel some pressure.”

After Mohawk Valley took control in the second half, Eastfield started to fight back late. They came up with a couple of stops and made some tough baskets in the paint. Guards Mike Aranda and DaJuan Ridgeway both hit a pair of clutch 3-pointers to bring the score to 91-87.

“We made some mistakes and fell down in a hole, not containing our man and giving them open threes,” Aranda said. “But we showed heart. I’m just happy we battled [and] just showed some effort. … I just think we made some mistakes down the stretch that cost us. We fought back, and we still had a chance to win at the end. That’s all you can ask for.”

The Harvesters’ 2020 run may have come to a close, but they finished the year 27-7, won a conference championship, made their first national tournament appearance in four years and finished as one of the best four teams in the 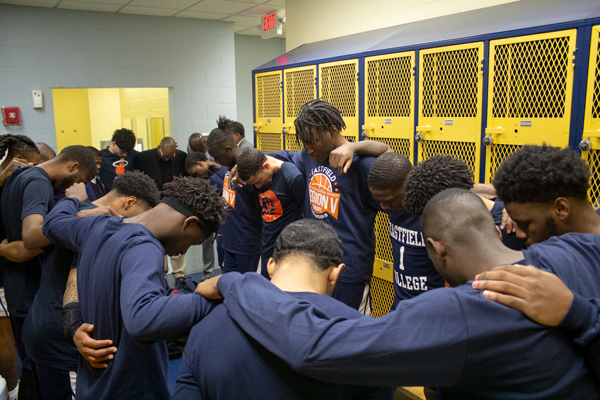 The Harvesters pray together in the locker room before the start of the semifinal game against Mohawk Valley on Friday. Photo by Skye Seipp/The Et Cetera

“Yeah it stinks we lost, but I want them to know that I’m super proud of them, [and] to walk out with their heads held high,” Fletcher said. “There’s no reason [for them] to walk out with their heads down. … You’re right there in that game. You battled, you competed, you gave everything you had. It’s not a bad or terrible thing. It’s a part of life.”

The experience of travelling to Minnesota and competing for a national title was a first for every team member this year, and it’s something they say they will remember forever.

“It meant a lot,” Aranda said. “It was my first time ever playing for something big like this. It was a great opportunity. … It’s a big deal. I wish we could have won it. I think we had the team to do it, but we just fell a little short.”

Forward D’Angelo Smith jumps for a layup during the semifinal match against Mohawk Valley. Photo by Skye Seipp/The Et Cetera

Center Tyrese Davis looks down in the locker room at halftime after being down at the break 49-46. Photo by Skye Seipp/The Et Cetera

Guard TaMarcus Butler jumps for a shot during the second period of the semifinal game. Photo by Skye Seipp/The Et Cetera

The Harvesters break from their halftime huddle and prepare to enter the gym for the second period. Photo by Skye Seipp/The Et Cetera

Guard DaJuan Ridgeway shoots the ball during the second period of the game against Mohawk Valley. Photo by Skye Seipp/The Et Cetera

Guard TaMarcus Butler yells at his team during the final half of the second period. Photo by Skye Seipp/The Et Cetera

Guard TaMarcus Butler puts his head in his lap during the final seconds of the game against Mohawk Valley. Photo by Skye Seipp/The Et Cetera

Guard TaMarcus Butler, right, and D’Angelo Smith press a Mohawk player in their zone near the end of the game. Photo by Skye Seipp/The Et Cetera

Coach Anthony Fletcher, left, gives guard Calvin Williams a high-five as he walks out of the Rochester Regional Sports Complex. Williams was one of the top scorers for Eastfield during the regular season and had to sit out the majority of both games after sustaining an ankle injury in the first two minutes of quarterfinal game on Thursday. Photo by Skye Seipp/The Et Cetera