Soccer has even record in conference 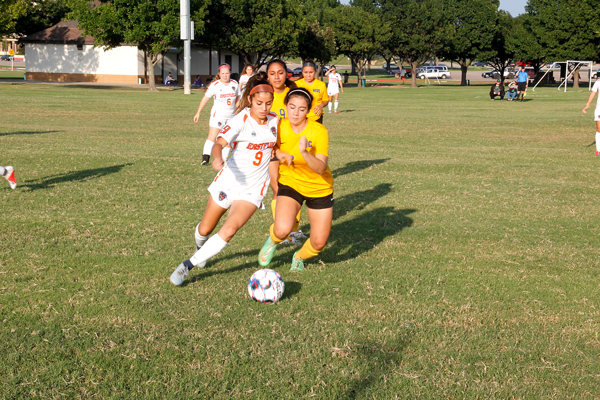 The Eastfield soccer team has a 3-3 record in conference play and 1-7 out of conference. Jonathan Diaz/The Et Cetera

The Harvesters are 3-3 in conference play after going 1-7 out of conference against a strong non-conference slate to start the season.

“(The tough opening) built us, made us stronger as a team,” said Tate. “We were getting beat up and we knew it wasn’t going to get easier, so we just had to keep grinding as a team and keep working hard for each other.”

Tate said he was not able to recruit or tryout players since he was hired on after that period. He also had no say in the schedule.

The team also only has four returning sophomores of the 20 players on the roster. The comparatively small roster has made not only games more challenging, but practice as well.

“I would’ve liked to have 30 girls just to have a deeper roster,” Tate said. “I think that gives you more competitiveness. Brings a different mentality in practice knowing that there is a number one, number two or even a number three spot.”

It also allows the team to do full scrimmages in practice.

With a group of primarily freshman and a new coach, there was no real established culture within the team.

“We’re almost starting from scratch,” Tate said. “Even though (the program) has been built up, it’s starting over again with new coaching staff.”

The Harvesters have been inconsistent in the early season, losing 10-1 to Richland College one day and then beating Southwestern Adventist University 10-0 the next.

The Harvesters have found more success against fellow NJCAA Division III schools than in their out-of-conference schedule. The team beat Cedar Valley (0-6) twice and Mountain View (2-4) once, while losing to Brookhaven (6-0), Richland (5-1) and North Lake (2-4).

The conference games, outside of the Mountain View game, have lopsided scores, with one team clearly outscoring the other. They have wins with scores of 4-0 and 3-1 and losses of 6-1, 10-1, and 3-0.

The game against Mountain View was a 1-0 win, with freshman midfielder Emily Garcia scoring the lone goal 57 minutes into the match.

“(I’d like to) finish out strong,” said Tate. “It would be great to get in the tournament and win a game or two.”

With his inaugural season almost at an end, Tate has begun looking towards his next campaign.