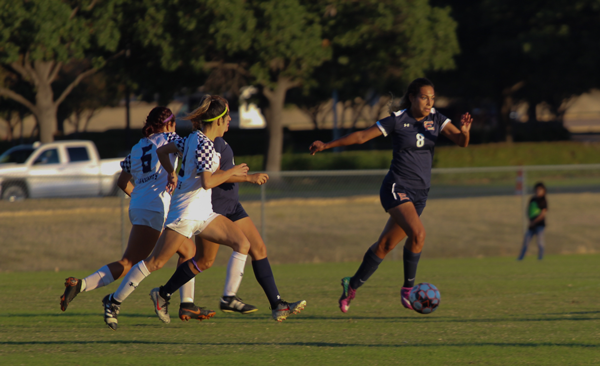 Emely Navarez dribbles past Richland defenders in the Dallas Athletic Conference semifinal game on Oct. 26 where Eastfield ended their season in a 4-1 loss. Photo by Brianna Harmon/ The Et Cetera

Trailing the entire game, Eastfield lost to Richland in the Dallas Athletic Conference semifinals 4-1 on Oct. 26, ending their season. 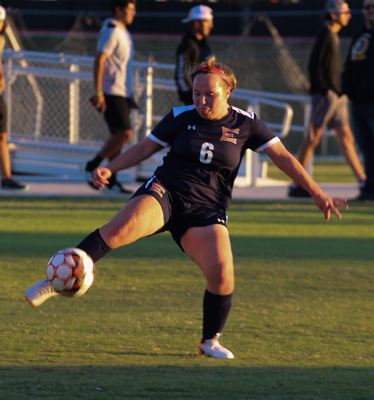 Crystal Evanyk kicks the ball in the game against Richland on Oct. 26. Photo by Brianna Harmon/ The Et Cetera

Richland had the momentum from the start scoring its first goal only minutes into the game. At half they held a 2-0 lead.

In the 31st minute a fight broke out between the two teams, and campus police, referees and coaches had to come onto the field to break it up. Eastfield middle Emely Narvarez and Richland middle Jazmin Baltazar were both given a red card for the fight and ejected.

Coach Paul Tate condemned the fighting but declined to comment on the matter.

After the fight, Cruz was determined to score and switch the momentum of the game back in the Harvesters’ favor.

“We just had to work harder and not give up,” she said.

“I felt that my team was giving it their all, and that made me push harder.”

“I still kept fighting and no matter if we lose or win,” Cruz said. “We will learn from our mistakes and it will only make us stronger.”

Tate knew after the red cards that he had to regroup the team and set up a new plan of attack. He was proud of the effort of his team despite the early deficit.

“That was the best part of the evening was fighting to the bitter end,” he said. “I wanted the girls to know we still had a shot in the game even though they had a lead.”

Middle Crystal Evanyk’s heart sank as she walked off the field for the last time in a Harvesters uniform.

“The loss really hurt,” she said. “Once that final buzzer went off, I knew my time at Eastfield was done. I got pretty emotional because that means I’m done playing with all these awesome girls I got to know so well. But it was a bittersweet type of thing because I know I have so much potential to move on and do so much more.” 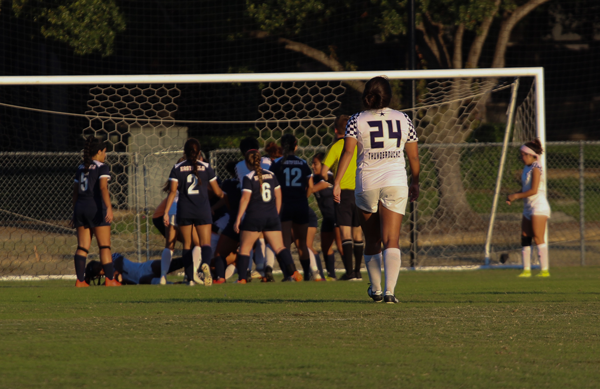 Players from each team huddle around the fighting players during the game on Oct. 26 Both players were given a red cared and ejected from the game. Photo by Brianna Harmon/The Et Cetera

This was Tate’s first recruiting class at Eastfield. Coming into the season he didn’t know what to expect from his athletes.

With only 7 returners, he did know he was going to need a spark from one of the incoming freshman.

Cruz was the freshman who was up to the task, leading the team in goals this season with 16. Sophomores Evanyk, Narvarez and Vasquez followed with four goals each.

At the beginning of the season Cruz struggled with finding the resources to make the 10-hour move, but pulled it out last minute.

“I didn’t expect she would end up scoring 16 goals,” Tate said. “At the beginning of the season we didn’t know if she would even be here. She puts her best foot forward every day on the field, and she’s a blessing to this team. Her being dangerous opened up opportunities for others to score because she was getting double-teamed.”

Now that the Harvesters’ season is over, Tate said he plans to continue to build off what the team accomplished this season.

“We plan on having a solid spring and moving forward into the next year,” he said. “Now that the season is over, we will look at who is going to return and build from there. We will try to bring in true soccer players to contribute.”