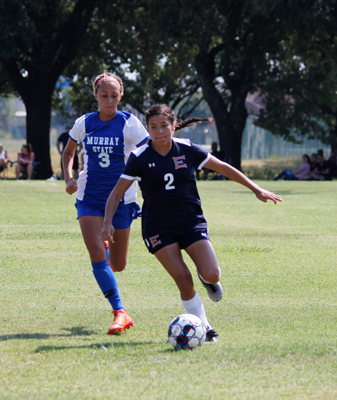 Soledad Cruz breaks away from defenders of Murray State on Sept. 6. She recorded six shots on goal that day. Photo by Rory Moore/The Et Cetera

As the final whistle sounds, freshman forward Soledad Cruz jogs off the soccer field, ecstatic. In her first game as a Harvester, she has just led Eastfield to a win over Division I Cisco College by completing her first collegiate hat trick..

After cool-downs, she rushes back to the bus, eager to share the news with her family, who live nine hours away in Mercedes. 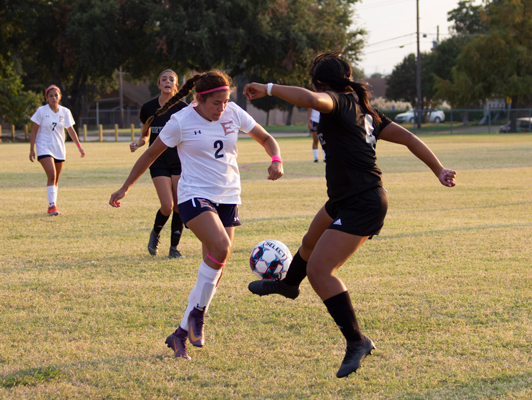 Cruz makes a play on the ball against North Lake on Oct. 4. Eastfield won the game 4-1 with Cruz getting one goal and an assist. Photo by Rory Moore/ The Et Cetera

“The first thing I do after a game is sit down and text my family group chat,” she said. “I tell them how everything went, and it makes me want to cry because they weren’t here to see what I’ve done. I want them to see how hard I’ve worked.”

Cruz has made a major impact on the Harvesters this season — who finished last week at 9-7 — leading the team with 15 goals scored. She was also named Dallas Athletic Conference Player of the Week for the week of Aug. 25-30.

“She is the difference between us winning games and not winning,” coach Paul Tate said. “She has fought to get us on the board early. After she got recognized nationally, people were looking her up and started double-teaming her, which created space to open other people up. So even when she isn’t able to score, she is still creating problems.”

Tate commended Cruz for being able to transition smoothly after her move.

“She came in and hit the ground running,” he said “She strives to push herself and likes the challenge. It’s a big change for athletes [who move from so far away]. Sole has became very close with some people on the team. It’s hard for these freshman. These kids have to become residents here.

Being away from her family is a daily battle for Cruz, who won’t be able to return home until Christmas.

“It’s heartbreaking,” she said as she broke down crying. “I’m not going to see them until after the season. It sucks, because what if something happens and I’m not there?”

All the hardships over the years have brought the family closer together. Cruz was only 10 years old when her two brothers, sister and mother stood outside their house and watched their father leave.

“I’ll be back,” he said to his family as they sobbed

Watching her father leave at such a young age has stuck with Cruz over the years. She began to cling to her two brothers, sister and mother. 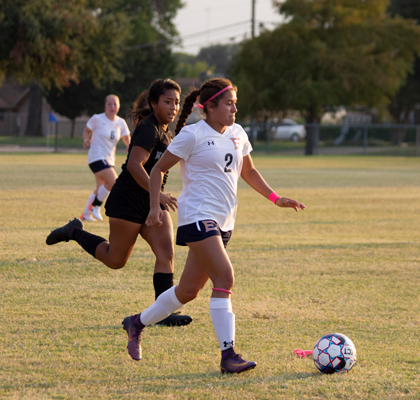 Cruz dribbles past North Lake defenders in the Oct. 4 game at Eastfield. Cruz finished the regular season with the most goals on the team with 15 and was named player of the week for Aug. 25-30. Photo by Rory Moore/ The Et Cetera

“I could see it coming,” Karla Perez, Cruz’s sister said. “That entire week before, he would avoid us. Behind the scenes, he knew he was going to leave us. One day he couldn’t control us anymore and he left and never came back.”

As days turned to weeks and weeks to months, Graciela continued to try to reach out to her husband, but he never came back.

“As soon as my dad stepped out of the picture, I felt like my mom went into survival mode,” Perez said. “Being undocumented and then having to provide for four kids is the hardest thing ever. At any moment she could have said she was taking us back to Mexico with her family, but she stayed here. She fought for us.”

Watching what her father did to the family has numbed Cruz to him.

“I don’t have hate towards him,” she said. “He has been missing for so long that I have no feelings for him anymore. A year ago I saw him hanging out with my brothers, but I just saw him as one of their homeboys hanging out.”

When Graciela went to take over payments for the family home, she found out her husband had not been paying the bills for eight months. She and her four kids now had no place to live.

Graciela began working whatever odd jobs she could to raise money for her family. Before then she was always the stay-at-home mom raising the kids. Being undocumented meant it was a struggle for her to hold down a job, but she would sell plates of food, clean people’s houses or work in the fields with her kids just to make ends meet. 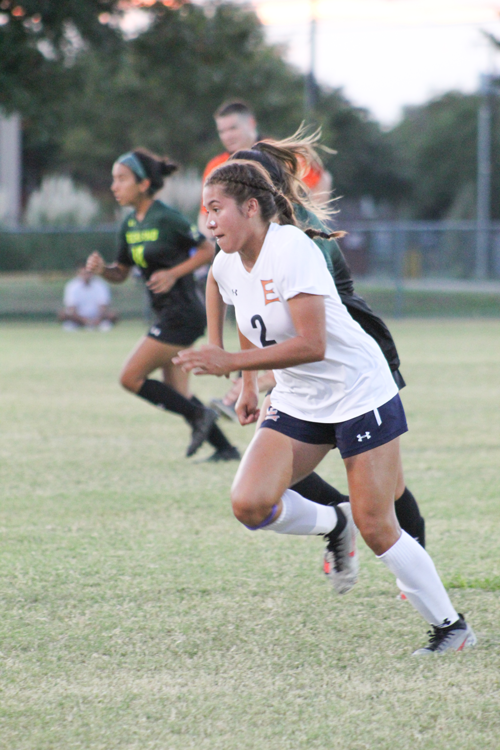 Cruz runs for the ball in the Sept. 25 game against Richland that Eastfield lost 4-0. Photo by Estefan Kulas/ The Et Cetera

Things got so bad that she sold their house and anything of value just to have money.

“My children are the best thing God has given me,” Graciela said. “The hardest thing was not having a job, but I always knew I had to find a way. It’s been difficult but not impossible. Seeing my children’s faces every day pushed me to keep moving forward so I can give them a better future.”

Each time Cruz steps on the field she remembers the struggles faced by her family in the years since her father left. She remembers the push her sister gave her to achieve her goals.

Cruz credits her smooth transition in college to the dedication and support her family has for her.

“All I want to do is make my mom proud,” she said  “I want to become an architect to build a house for my mom. My mom means everything to me.”

Graciela said she is beyond proud of the success Cruz has had on the field this season.

“I’m filled with excitement,” she said “I’m always amazed at how talented she is. She’s doing what she loves. I love how she sets her mind to something and doesn’t let anyone or anything get in her way.”

Correction: This story originally ran the town Cruz’s family lived in as “Mercades,” when it is actually Mercedes and was updated on Oct. 26 at 9:18 p.m.