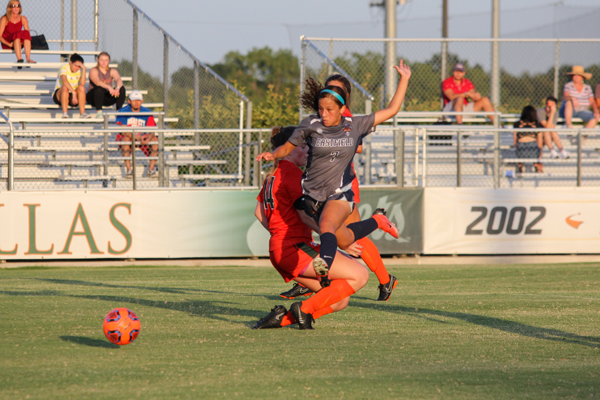 Marisa Vasquez leaps over an opponent for the ball in a scrimmage at UTD. Photo by Rory Moore/The Et Cetera

As coach Paul Tate welcomes in his first recruiting class, he hopes to build on success of last season.

With only seven returners, the Harvesters will look to the freshmen to help provide more depth and diversity to the team.

Midfielder Crystal Evanyk, who led the Harvesters in goals with seven, will be one of the sophomores.

“We were strategic this year,” said Tate. “We were looking for stronger players to build on what we had from last year. We didn’t have a horrible team by any means, but it was put together last minute so we really just had to grow.”

The Harvesters 2018 season ended with a 6-11 overall record and 3-8 in conference play. The team made it to the semifinal game in the Metro Athletic Conference Tournament, where they lost to Brookhaven 5-1.

Sophomore defender Eimy Guzman said that the team’s work ethic was elevated to another level. The loss in the semifinal game gave the team a push to come back this season and work harder.

“The feeling is the worst,” Guzman said. “You really take it to heart. You have to wait a whole year to get it back. It shows you to go harder on every sprint and play every game like it’s your last. Give it your all and don’t ever settle.”

Guzman pushes herself and the team to get better every day by strengthening her communication skills.

“Everyone is really working hard for each other,” Guzman said. “We are still learning everyone’s style of play, but we are on the same page. We are already starting great, in my opinion. If we continue this way, I think we can go all the way.”

Tate said he is continuing to build on the successes from last season, but is excited about being introduced to new playing styles from the freshman class. 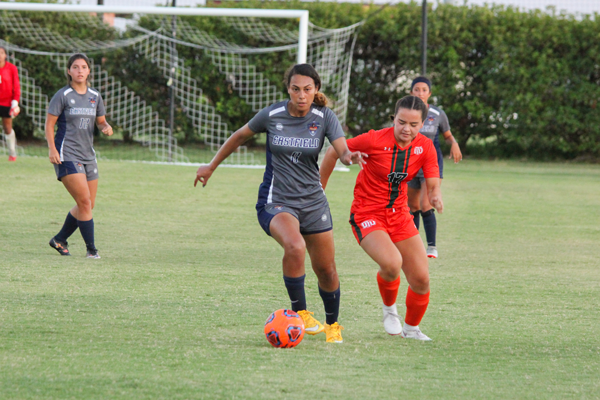 Emely Narvarez dribbles the ball away from a UTD defender. Photo by Rory Moore/The Et Cetera

“I’m feeling a lot stronger about this season,” he said. “We will fight more as a team, and I’m really excited about that. This is going to be the base of us growing for the future and us to be able to compete against the tougher teams in the conference.”

Freshman Marissa Vasquez looks to her communication skills on the field to help the team move the ball more efficiently through the midfield.

“Even though I’m one of the younger ones everybody still needs that extra push, whether they’re a sophomore or a freshman,” Vasquez said. “Everybody needs that extra little motivation to get better every day. I feel like we are growing together very fast. We are moving the ball better and everything is just so much better from day one.”

“He just has so much knowledge of soccer to give these girls,” Tate said. “He doesn’t get to coach as much, so when he is here he just wants to indulge and coach.”

Away from Eastfield Reese is a firefighter for the Dallas Fire Department as well as the director of operations for the East Division at Solar Soccer Club in Dallas.

Reese helps the team work on fundamentals to become more defensive minded. Reese and Tate are pleased with how the team has responded to the pressures of two-a-day practices.

“Their determination to not give up and quit is something different than before,” said Tate. “They want to be pushed. They are enjoying it. They know what the goal is. We were at the semis last year, and a lot of people would say we shouldn’t have been there.”

Tate’s goal for this season is to win the conference tournament and advance to the national tournament. Tate said Richland and Brookhaven will be the two teams to defeat this season.

“I think we are sitting where we can compete and be more successful,” he said. “I think the basis this year is we will build on the foundation to be so much stronger.”