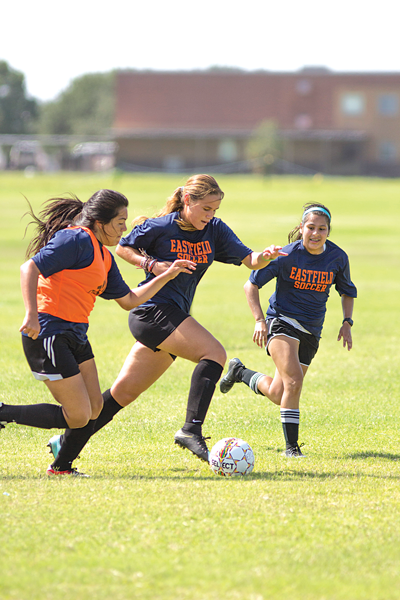 The women’s soccer team are working to rebuild this year, from the players to acclimating to the new coaching staff. Jesus Ayala/The Et Cetera

Despite having only five returning players, new Eastfield women’s soccer coach Paul Tate is excited to lead his young team.

“90 percent of our team is freshmen, so we might be an underdog,” he said. “But I think that making it to the conference tournament is doable. We just have to work as a unit.”

Tate is replacing Dustin Stein, who resigned for an assistant coach position at the University of Pittsburg after accumulating a 56-32-4 record during his five seasons at Eastfield.

Looking at the Lady Harvesters, Tate sees the potential in his players to have a great season.

The team currently ranked No. 8 by the National Junior College Athletic Association for Division 3.

A year ago, the Lady Harvesters went 18-4-1 for the season. The team did exceptionally well playing at home, posting an 8-1-1 record.

The Lady Harvester’s season ended when they advanced to the NJCAA Region V tournament semifinal where they lost 1-0 to Richland College.

Tate’s assessment of the team going in to this season is energetic but realistic.

“90 percent of our team is freshmen, so we might be an underdog,” he said. “But I think that making it to the conference tournament is doable. We just have to work as a unit.”

Midfielder Sara Tackett is one of the five returning players to the team. She said she’s optimistic about the new group of players coming in. 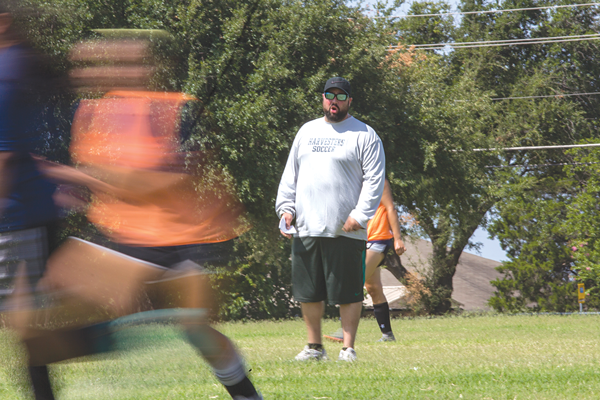 The women’s soccer team are working to rebuild this year, from new players joining the team to the program acclimating to the new coach. Jesus Ayala/The Et Cetera

“We seem to have a pretty talented group of freshmen,” Tackett said. “And even though I was nervous at first, after the first couple of weeks of practice we could tell that the team was starting to come together.”

During this rebuilding season, the Lady Harvesters have been working diligently to improve the team’s chemistry and ability to control the ball.

“We have to keep the ball on the ground,” Tate said. “When it pops up it throws the game off and it’s harder to pass. If we can do that we can control the game a lot better.”

For the upcoming season, Coach Tate’s philosophy is to keep things simple. Tate said his mission as a coach at Eastfield is to “show these girls what a college team looks like and to be that stepping stone which gets them to the next level.”

Because Eastfield is a two-year program Tate explains that the dynamics of coaching are different from a four-year school because student athletes are focused on more than just sports.

“Sometimes you get players who are less committed because they just want to get that associate of arts and move on or they have to work a job that’s helping them pay for classes and I have to work with that.” Tate said.

But even with these challenges, the coach is glad when student athletes are able to get to the next level.

“If I can help players get an academic scholarship that helps them move on to a four-year school then I’m happy,” he said.

With the season right around the corner, the new freshmen players are eager to get out on the field and show their talents.

New left back defender, Emily Garcia, is excited for the season and confident in the teams passing and speed abilities.

“We are a short team, but we’re fast, and we can dominate through our speed because we’re good at passing the ball, so I feel really good about this season,” she said.