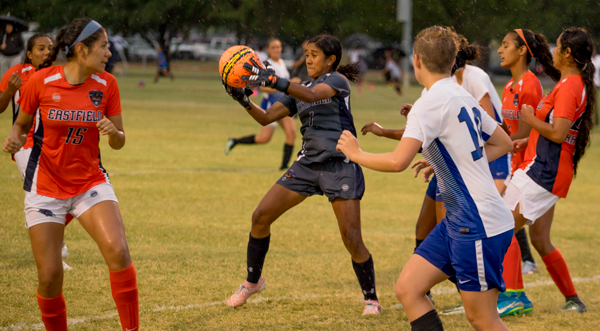 Dustin Stein sat in the stands with about 20 other college soccer coaches at an FC Dallas recruitment showcase last November, waiting to watch a small-but-prodigious goalkeeper by the name of Gabriela Roa.

Stein was already familiar with Roa, a versatile player capable of playing in the field and between the sticks. The Eastfield coach had followed her since her playing days at Lakeview Centennial High School. Her club coach, Chris Spear, had invited him and the other coaches to the showcase to expose Roa’s potential.

The match started and within minutes Roa was needed to step into action. The ball was crossed into the box from the wing, but Roa was unable to read the flight of the ball when she jumped. It bounced between her legs, off her heel and into the net she was defending.

Upon seeing the mistake, 18 of the coaches walked away. Stein stayed.

Seeing Roa’s frustration, he figured that she may have lost the ball in the sun. It was an unlucky but costly error.

“Unfortunately, in the recruiting world, you can be judged on one mistake,” Stein said. “I hung out to watch her a little more and tried talking to her afterward.”

Stein said he’s glad that he stayed since Roa eventually ended up in Eastfield. However, it wasn’t a direct route.

Roa first committed to Brookhaven, but Stein didn’t give up. He invited her to visit the Eastfield campus and promised her a starting spot in goal.

He knew Brookhaven wouldn’t guarantee such an offer because the Bears were returning the goalkeeper who helped them reach the national tournament the previous season.

A few days later, Roa called and said she wanted to sign with Eastfield.

Roa looks on from her box in the rain in the game versus Murray State. Her commanding presence for Eastfield resulted in two consecutive DIII National Goalie of the Week awards by the NJCAA. Photo by Jesus Ayala/The Et Cetera.

The freshman Roa is now second in the nation with eight shutouts and has played every minute of the season so far. She’s made 65 saves with an .867 save percentage as the Harvesters have lost only twice through 15 games.

Her performances early on earned her two consecutive Division III National Goalie of the Week awards by the National Junior College Athletic Association and a Region V Player of the Week honor.

She has helped Eastfield earn a No. 8 ranking in the nation in the Sept. 26 poll and start conference play 3-1.

Not short on talent

Although she stands just 5 feet 2 inches tall, considerably short for a goalkeeper where taller players with a longer reach are preferred, Roa hasn’t let her height stop her from becoming one of Eastfield’s key players this season.

“Other teams and coaches will look at me and think, ‘Oh, just shoot it over her,’ ” she said. “But the advantage is that I can jump, and I’m very quick.”

Justin Staab, Roa’s coach during her high school years at Lakeview Centennial, said she doesn’t look like a typical goalkeeper at first glance.

“She’s not the size of a goalie,” Staab said. “Not height, not size, weight, bulk, none of that. She’s just this tiny little monster that has these hops and touches the crossbar.”

Stein said Roa’s technique and speed from her experience as a field player give her an edge while playing in goal.

“She’s phenomenal on breakaways,” he said. “She’ll come off her line really quickly. If we are caught with a high line and a good ball is played through, she’s not afraid to clear the ball with her feet because she’s very good with them.”

Stein praised her commanding presence and vocal leadership on the field, something he felt the team lacked last season.

“That was the biggest thing that drew me to recruiting her in the game I watched,” he said. “She just demands the backline. She helps keep us organized. It’s just massive having a goalkeeper that will talk. I can hear her on the sideline, communicating and telling them to drop back or recover on somebody. It’s good to know that she’s handling that, and it’s one less thing that I’ve got to worry about. I’d much rather that come from my goalkeeper.”

Roa also feels that she has a good connection with her defense.

“Ever since I started, I’ve gotten closer to these girls, especially Adriana [Arzola] and Aileen [Hernandez],” she said. “They pretty much have my back whenever I’m off my line or something like that.”

Stein said Roa’s most standout attribute is her athleticism and shot-stopping ability. She’s even garnered praise from opposing coaches.

“Almost every game we’ve played this year, the opposing coach will say, ‘Man, your goalkeeper. Holy cow!’ or ‘Where did you get this goalkeeper?’ ” Stein said. “She’s kept us in a lot of the close ones.”

One of those performances came in a 3-1 win over Paul Quinn College on Sept. 19.

On a set piece, Paul Quinn senior Amy Joya shot a free kick toward the top corner. Believing it was out of reach for Roa, Joya and her coaches on the sideline started celebrating as soon as she took the shot.

Roa had other ideas. Somehow, she was able to stretch fully, parrying the ball away to prevent the goal.

“She can just fly,” Stein said. “She throws her body at everything. She gets up to the shots going under the crossbar and will deflect it up and over. She’s a really good shot stopper. I think goalkeepers have to be a special breed. Not everyone wants to throw their body in front of a ball.”

In high school lettered all four years and was the starting keeper as a freshman. However, a concussion at the start of the season caused her to miss the remainder of the season. The majority of her sophomore year was played on the field as an attacking player.

Roa takes a goal kick, wearing her preferred Adidas Nemeziz 17.1 and custom Outlaw goalie gloves. She said that she likes the color scheme of her kit to match the school’s colors. Photo by Andrew Gonzales/The Et Cetera.

It wasn’t until her junior year that she established herself as the undisputed No. 1 in goal, and she stayed there for the rest of her high school career, finishing her senior year as team captain.

It was her outstanding reflexes and shot-stopping abilities as a goalkeeper that earned Roa her high school nickname, “spider monkey.”

“Her senior year in our first game against Sachse, the goalie’s mom at the end of the game was like, “God dang! Your goalie is just a little spider monkey. She was everywhere tonight,’ ” Staab said.

Roa said the name came from her jumping and ability to save even the most well placed shots in high school.

“It started junior year,” she said. “One time I saved an upper-90 shot (in the goal’s top corner), and it’s been going on ever since.”

Roa was part of the Lakeview Centennial team that reached the playoffs her freshman and senior year. Staab said he has good memories of Roa playing for him. His computer screen wallpaper features the team photo of her senior year, with Roa in a bright orange goalkeeper kit in the center.

Roa said playing soccer has given her a new perspective on life, as well as new friendships and a new attitude.

“It was a big thing for me,” she said. “I had no doubt in myself that I would get recruited by colleges.”

Roa said she plans to play with the Harvesters for two years.

“I’m trying to look for universities after this, but if I can’t, then I’ll stay another year,” she said. “Hopefully, I get more opportunities.”

In the meantime, Roa said she has a lot to look forward to at Eastfield. She wants to major in criminal justice.

“Ever since I was younger, I’ve wanted to be a cop,” she said. “It fascinates me how they go out there, save people and take care of the community.”

Roa, who has been playing soccer since she was 8 years old, is also an avid follower of Mexican side Tigeres de UANL and European powerhouse FC Barcelona.

Roa said she sees herself mirrored in the player she admires the most, former Mexican goalkeeper Jorge Campos.

Campos was just 5 feet 7 inches tall but still played at a high level throughout the 1990s and early 2000s, competing in two World Cups. He was known for his speed, reflexes, his colorful self-designed uniforms and risky play.

He was arguably most famous for his versatile ability to start a professional game as a goalkeeper then switch to a forward position to score goals.

“He’s my favorite player because he was also short,” Roa said. “He was a keeper but he would play on the field, too. It kind of reminds me of me. I look up to him.”

Off the field, Stein said Roa is a bit of a “goofball” who likes to joke around.

She isn’t the only unique character on the team.

“This is probably the loudest personality team I’ve ever had,” Stein said. “We’ve got divas on the team, the pranksters and the goofballs. There’s not a lot of quiet time with these girls when you get them in a group. It’s a really fun group of girls.”

Staab described Roa as a “phenomenal person” and a leader who cares about everyone she gets to know.

“She brings positivity and energy to any situation,” he said. “She builds positive relationships with so many different people. Even when there’s cliques within cliques, she tends to be a part of all of them and can glue people together.”