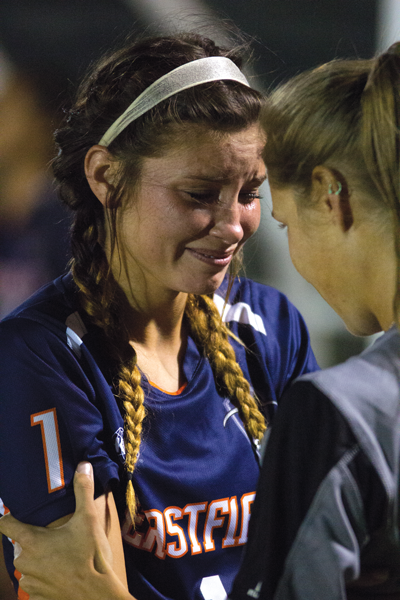 Sophomore Torri Sayman fell to the ground after missing the final penalty kick that would have tied the game against Brookhaven. With the miss, the Harvesters lost 3-2 and their season ended.

There was not a dry eye on the Eastfield sideline. The jarring pain of last season’s loss against Richland in the conference tournament final returned to the surface.  This time it was in the semi-final of the Metro Athletic Conference tournament.

“I’m devastated for these sophomores,” coach Dustin Stein said. “Right now it crushes me seeing Torri like this. I put a lot of pressure on her, and she missed the shot. It’s never easy to be the fifth shooter. We just have to get through the next 24 to 48 hours dealing with the girls and their emotions personally, but at the end of the day my job is to prepare for 2017.”

Although she said she was heartbroken, defender Sayman said she was proud of the team’s performance against Brookhaven.

“We all went out there with heart,” Sayman said. “That is the best I have ever seen my team play. Every girl out there put her heart on the field. We just couldn’t capitalize. We couldn’t finish.”

[READ MORE: Working at the zoo is a dream come true]

The teams where scoreless through regular play and after 20 minutes of overtime, so they went to penalty kicks. The first team to score 3-out-of-5 penalty kicks wins.

Calvillo and Juarez found the back of the net, but the others missed.

As Sayman approached the ball to line up her penalty kick, the score was 3-2 with Brookhaven ahead. She had to make it to keep the game alive.  She kicked and missed and immediately fell to the ground.

It was her last play for the Harvesters. She will graduate in December.

The Harvesters finished 14-6-1 overall and 7-4 in conference.

“I think we played well,” Stein said. “The first half we struggled a bit. We played nervy. Our defense played incredible. Karla [Corchado] played incredible. It was just one of those days where the ball wasn’t going to bounce our way and go in the back of the net.”

Corchado said she was disappointed in herself for missing her penalty kick and failing to block the three by Brookhaven, but is motivated to come back next year and get better.

“This whole year I feel like I’ve carried this team on my back, and I feel like I fell in the last second,” Corchado said. “Right now there is nothing I can do about it, not
anymore. The only thing I can do is be the best next year. After you make a mistake, the first thing you should do is turn around and fix it and that is what I’m going to do.”

In the second half of the game, captain Karla Gutierrez went down with an ankle injury and had to be helped off the field. She did not return to the game.

“I felt it. I already knew I was out,” Gutierrez said. “When I fall, normally the pain starts going away lightly, but I couldn’t stand the pain. I was crying not because of the pain, but because I knew I wasn’t going to be able to sit there in the semi-finals and not be able to help and be the captain.”

Sophomore midfielder Cobar said she could feel the difference in the team once Gutierrez left the game.

“We just lost one of our best players,” Cobar said. “I really wish she wouldn’t have come off the field because I knew she could have made a difference in the game. She is very smart with her plays, and she is the main reason we move the ball around. When she left, the ball wasn’t moving anymore. It was on one side. We couldn’t function as a team.”


We updated the story with the correct record. Thank you.