Harvesters brace for Cyclones tonight amid changes to tournament scheduling

ROCHESTER, MINN — The NJCAA has announced that they will continue Division III tournament play but will be canceling the consolation bracket and moving Saturday’s championship game to Friday amidst the concerns of the coronavirus outbreak.

Whichever two teams win today and in the semifinals tomorrow will play again that night to decide the national champion.

Coach Anthony Fletcher and the coaching staff met with tournament officials and coaches from other teams today to determine how the rest of the tournament would play out. He said with NCAA schools canceling March Madness tournaments and the NBA suspending their season, it could have been an issue for the NJCAA.

“But the tournament is not canceled, so we’re ready to rock n’ roll,” Fletcher said. “Just gotta be tough [and] strap on those war boots and be ready to go to war.”

Guard Ezekiel Fields said the team now has to focus on eating properly and staying healthy with the possibility of having to play two games tomorrow. Fields added that either way they still plan to come out and dominate each game.

“It’s going to be tough,” Fields said. “We still gotta pull through and be focused on what we gotta do [and] take it one game at a time.”

He said the team needs to start washing their hands more to ensure no one contracts the virus.

“Right now, we are not even in our hometown, so you don’t know what we are touching or who touched it,” he said. “We just gotta be cautious about that.”

Tonight, the No. 3-seeded Eastfield Harvesters will take on No. 11 St. Cloud Tech in the quarterfinals of the 2020 NJCAA Division III national tournament at 8 p.m. after the Cyclones’ upset of No. 6 Hostos Community College Wednesday. The game will decide who moves on to Friday’s final four.

“We’re going in 100 percent,” forward D’Angelo Smith said. “We always have high confidence. That’s why we win games. Even if we’re down, we pick each other up.”

The two teams both feature high-scoring offenses. The Cyclones ranked ninth in the country averaging 91.3 points a game this season while Eastfield was fourth with 95.9. The two teams are practically identical in shooting percentage, posting 46.5 and 46.2 percent, respectively.

Even as the No. 11 seed, the Cyclones only lost three games all season to finish 26-3, while Eastfield comes in at 26-6.

Head coach Anthony Fletcher feels good about his team’s chances of advancing. He thinks his team can capitalize on some of the weaknesses in the Cyclones’ game, such as their lack of rebounding and depth on the bench.

“I like the matchup,” Fletcher said. “They got a lot of guys that can shoot the ball, but there’s some things I see that we can potentially go into the game and try to take advantage of. I think we can attack some of their guys from the perimeter and get some offensive.” 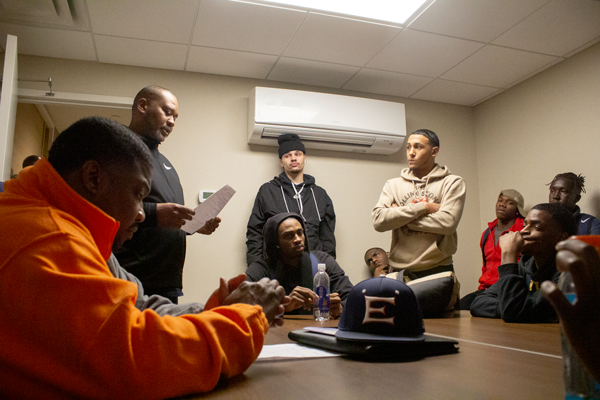 The Harvesters held a team meeting last night after the St. Cloud and Hostos game to go over strategies for today’s match against the Cyclones. Photo by Skye Seipp/The Et Cetera

Despite being the underdog, St. Cloud started hot against Hostos, going up by double digits only a few minutes into the game. Hostos crawled back late in the first period and trailed 53-48 at halftime.

Halfway through the second half, the game looked out of reach for Hostos as St. Cloud maintained a 13-point lead. In the final minutes, a sudden last gasp by Hostos seemed to catch St. Cloud by surprise and they gave the ball up on multiple occasions that turned into easy baskets. With 21 seconds left, Hostos made it just a three-point game but couldn’t pull off the comeback and lost 106-

The Cyclones have two game changers in Paul Coleman and Eric Racine. The two guards carried St. Cloud to the win over Hostos with quick feet and good shooting from the field. Racine went 5-for-6 from on three-pointers and finished with 29 points while Coleman put up 21 points.

Eastfield guard Calvin Williams knows St. Cloud has some talented playmakers, but he also feels the Harvesters are ready for the challenge.

“They’re a fast team,” he said “We can beat them, but it’s going to be a tough game because they can shoot, they can play defense and they’re fast. That’s pretty much how we play, but we jump and they’re not really athletic like us. So that’s what we’ve got over them.”