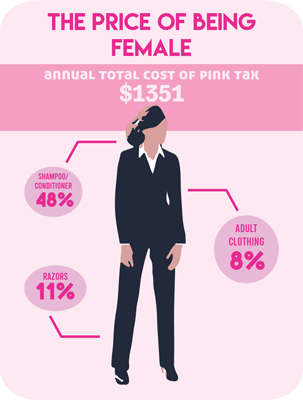 However, necessary everyday products cost women more as well due to the pink tax.

The pink tax refers to the price difference in men’s and women’s products or services, causing women’s items to be more expensive than men’s.

The phenomenon affects the price of goods from the grocery aisle to the dry cleaners. 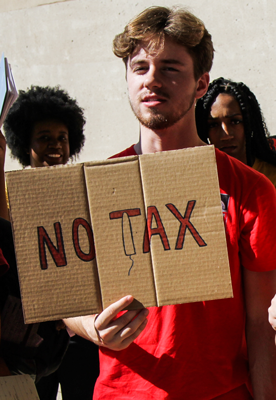 On Oct.19, women around the country, including in Dallas, protested to end taxes on tampons for the first ever National Period Day.

Social sciences professor Tiffany Nacoste said overcharging for women’s products is a systemic problem because a lot of these economic policies are made by men.

She said many women, herself included, often give in to purchasing overpriced items because of aesthetics.

“Our government is not necessarily indicative of the population,” Nacoste said. “The people in charge are making policies for the people not in charge. I think that if there were more women representatives, then more than 36 states would have tax-free feminine hygiene products. But it’s just this one group making policies about another group.”

Of the 435 members of the House of Representatives, 109 are women, six of whom are from Texas.

The pink tax goes unnoticed by most shoppers, but it has a massive impact on consumers’ wallets over time.

Katyana Armani, a government professor, said she used to spend more than needed when getting her laundry professionally cleaned.

“Of course, their explanation was that there are more pleats in women’s tops or that the buttons are on the other side, like that justifies it,” she said. “There’s different variations from different vendors regarding why they charge an extra fee for that.”

A couple dollars here and there for laundry may not seem like much on the surface, but that money adds up. According to Ax The Pink Tax, women pay $1,351 more than men annually.

The generic Target brand Up & Up  laxatives provides a perfect example of the pink tax.

Jaylon Gross, a game design major, was unaware that the price difference existed and made the point that products should be equally priced for people as a whole.

“Now that I hear about it, I think it’s outrageous for women to pay more,” he said.

Rachel Wolf, associate vice president, said that a large portion of this marketing is based on gender norms.

“They’re capitalizing on the heteronormative or gender binary reality,” Wolf said. “This is feminine, and this is masculine, and we’re only comfortable in one of those two boxes, so we have to buy these products as part of that value system.”

The first National Period Rally was held outside Dallas City Hall on Saturday Oct. 19. Members from PERIOD, The Period Project, She Supply and The Period Project gathered to provide information around menstrual hygiene and the importance of providing menstrual products on school campus. Photo by Anthony Lazon/ The Et Cetera

Marisa Austin with PERIOD Denton speaks to a crowd outside Dallas City Hall who gathered in support of the National Period Day on Saturday Oct. 19. Photo by Anthony Lazon/ The Et Cetera

A representative from Hope Supply Co speaks at the first National Period Day held on Saturday Oct. 19 at the Dallas City Hall. Photo by Anthony Lazon/ The Et Cetera

Averie Bishop, Miss Dallas 2020, speak to a crowd at the National Period Day Rally outside of Dallas City Hal on Oct. 12. Photo by Anthony Lazon/ The Et Cetera

Around 75 students and members of the community gathered outside Dallas City Hall for the first ever National Period day Rally on Saturday Oct. 19. Photo by Anthony Lazon/ The Et Cetera

Marie Jung, president and founder of The Period Project at SMU, pose for a photo with members of her organization and Miss Dallas 2020, Averie Bishop, at the National Period Day Rally at Dallas City Hall on Oct. 19. Photo by Anthony Lazon/ The Et Cetera