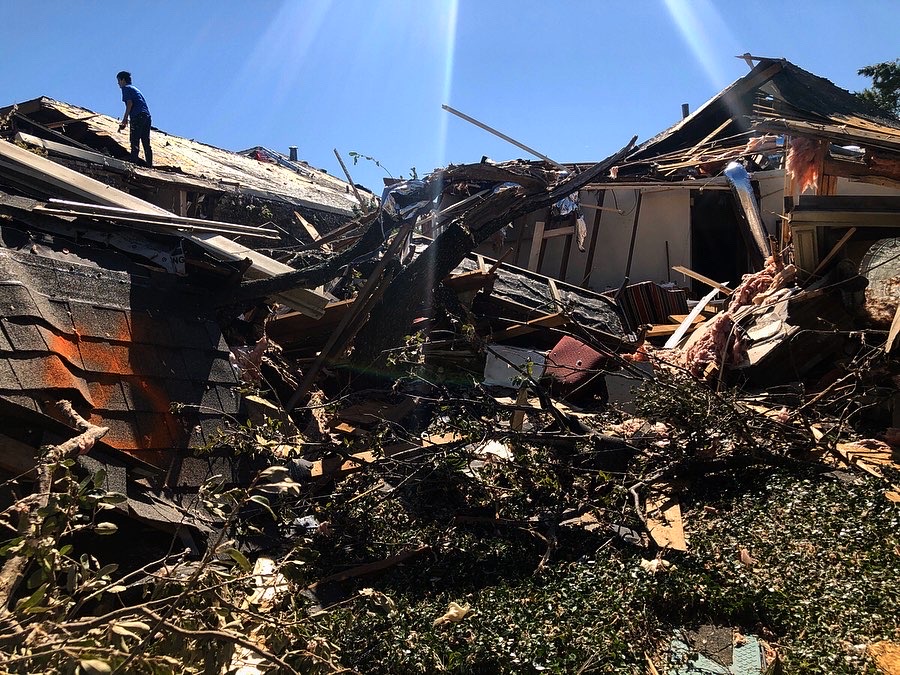 35 homes have been condemned in the Richland Oaks neighborhood in Richardson following the tornado that swept trough the area on Sunday, Oct. 20. Photo by Anthony Lazon/ The Et Cetera

Ten tornados tore across North Texas after dark Sunday night, leaving severe damage in their wake but causing no deaths, according to the National Weather Service.

An EF-3 tornado touched down near Love Field and streaked east on a path south of Interstate 635 before crossing the highway into Richardson. An Ef-2 hit Garland, while an EF-1 battered Rowlett, Rockwall, Kaufman and Midlothian, and an EF-0 hit Allen, Wills Point, Ferris and Kaufman.

The EF rating scale ranks tornadoes from weakest to strongest, ranging from zero to five. The tornado watch lasted until 4:52 a.m.

Dallas County Community College District’s Richland campus is near the path of the Dallas funnel.

The college and its LeCroy Center were closed Monday because they had no electricity.

DCCCD Chancellor Joe May said in an email to employees Monday that the district is assessing the needs of students and employees who may have been impacted by the storm.

Dallas police urged residents in the affected areas to remain indoors from 7 p.m. to 7 a.m. through Thursday.

We have found evidence of another tornado in Allen in Collin County, on the west side of town. The tornado will be rated EF-0 with 80 mph winds. This brings the total tornado count up to 10 tornadoes for 10/20/19. More information on this tornado will be provided later #dfwwx

About 130,000 people across North Texas were without power as of 4:40 a.m. Monday, according to Oncor Electric Delivery. About 40,000 remained in the dark Monday night.

The Richland Oaks neighborhood in Richardson received heavy damages from the storm on Oct. 20, with many houses in the area being condemned.

Jane Murrell, a renter in the neighborhood, was staying over at a friend’s house on Sunday night when her roof collapsed into her living room.

She has been working to get her belongings out of the house before the expected rain on Thursday, but she’s been having asthma problems from the mildew inside her home.

“It’s horrible inside the homes,” she said. “Everything is wet, but we have to rush to get things out of the home.”

The National Weather Service reports there’s a 60 percent chance of rain on Thursday.

Dallas Mayor Eric Johnson said the Bachman Recreation Center has been opened as a shelter by the American Red Cross.

“Considering the path the storm took, it went across a pretty densely populated part of our city,” Johnson said in a news conference on Monday. “We should consider ourselves very fortunate we didn’t lose any lives.”

At the intersection of Pimberton Drive and Tibbs Street in Dallas, houses suffered from roof and window damage, with at least one car flipping over onto its side.

Trees and utility poles snapped due to strong winds.

—Anthony Lazon
contributed to this report

A Resident of the Richland Oaks neighborhood in Richardson takes a stroll around his neighborhood two days after multiple tornadoes hit the North Texas on Oct. 20. Photo by Anthony Lazon/The Et Cetera

A car remained flipped over a day after strong winds from the storms that swept across North Texas on Oct. 20. Photo by Brianna Harmon/ The Et Cetera

Dallas Fire Rescue station 41 was left uninhabitable following the tornadoes that swept through areas of North Texas on Oct. 20. Photo by Sonya Nuñez/ The Et Cetera

The U.S. flag at Home Depot off of I-75 and Forest Lane continued to stay raised a day after a tornado hit North Dallas on Oct. 20. Photo by Sonya Nuñez/The Et Cetera

The neighborhood of Richland Oks in Richardson was one of the neighborhoods that received heavy damage as a result of the tornadoes that swept through parts of North Texas on Oct. 20. Photo by Anthony Lazon/ The Et Cetera

Around 35 homes have been condemned in the Richland oaks neighborhood in Richardson following the tornado that swept through the area on Oct. 20. Photo by Anthony Lazon/ The Et Cetera

Jane Murell, a resident of the Richland Oaks neighborhood continues to remove her personal belongings from her home two days following the tornado that swept trough Richardson on Oct. 20. Photo by Anthony Lazon/ The Et Cetera