From acrobats swinging from the ceiling to an uneven bar performance on a spinning stage, “Cirque du Soleil: Amaluna,” one of the 20 unique shows produced by Cirque, is nothing short of amazing.

The round stage, surrounded by green vines and painted in blue, brown and green, is a surprisingly versatile space that adapts to new scenes unexpectedly well.

“Amaluna” is showing in Grand Prairie until March 3.

“Amaluna” follows the wreck of an all-male crew ship onto an all-women island during the coming of age ceremony for Miranda, the female lead of the play. The audience doesn’t really know much about Miranda, or any of the other characters for that matter.

The plot follows two clowns — a bashful man from the ship and a more blunt woman — who fall in love and the story of Miranda and Romeo, one of the crew stranded on the island, who find themselves in a more forbidden love at first sight.

The storyline for the clowns is easy to understand, with the performers making very obvious, overacted — as should be expected from clowns — advances on each other while Miranda and Romeo fight the women of the island to be together. 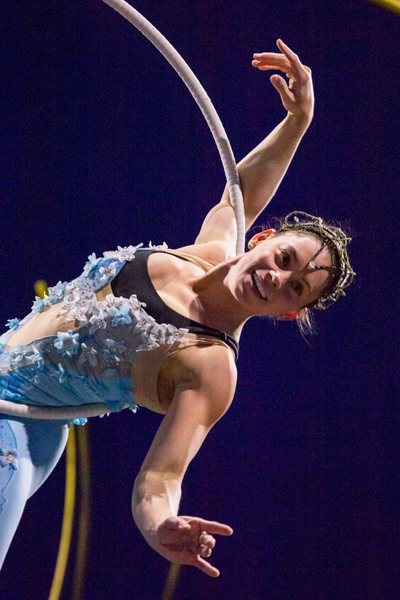 Alix Croop, an uneven bar performer, auditions for the role of backup moon goddess, an aerial hoop act. Croop has been traveling with Cirque du Soleil for about 10 years. Photo by Yesenia Alvarado/The Et Cetera

That’s not to say the story isn’t important. It receives the attention it requires to make the show more than simply spectacle. The lack of backstory for the island, the civilization or the characters make it more difficult to follow, but the whole purpose of the plot seems to be more accenting the amazing feats of the performers.

“Amaluna” is probably best described as an acrobatic ballet with some classic circus elements woven in. The clowns are probably the most circus-esque part of the performance.

The performance opens with the female clown, Miranda and the lizard-person running around the big-top tent venue as the audience takes their seats. The lizard, a mischievous character, was one of my favorite parts.

Before the show starts in earnest, he runs around throwing popcorn at audience members, stealing bits of their snacks and running from the female clown while showing a protective attitude toward Miranda.

The clowns and one lizard-person really carry the most character in the performance, while the rest seem to be defined by their gymnastic abilities.

The opening is a mix of circus and theater, with the live band performing a mystic punk score while all the female characters are introduced during Miranda’s ceremony.

The acts, with performers swinging from ropes out over the crowd and two women who appear to be twins riding unicycles, are reminiscent of the non-animal acts from the Ringling Bros. Circus.

Other cast members dance across the stage, presenting themselves to the audience as if in the opening performance of a musical.

The big-top tent, with more than 2,600 seats, is surprisingly intimate. The front sections regularly see gymnasts soaring overhead and the characters in the story will occasionally run out into the audience.

The clowns are an especially intimate part of the performance, even kissing some audience members.

The whole experience is fun and feels much shorter than two hours, but it is notably missing elements that I expected. Having gone to training the week before and watched some videos of previous performances on YouTube, I saw some acts that were absent in the performance I attended.

Granted, this could have to do with turnover on the show’s cast and a desire to keep “Amaluna” interesting — the show has been touring for about a decade. The absence of these performances didn’t detract from the overall quality of the show.

Parts like the balance goddess, which was more nerve-wracking than any other part of the show, were enough to keep me entertained.

This video doesn’t show the current performer in the role of the balance goddess, but it gives a good idea of how the act goes. The balance goddess starts with one small stick or counterweight of some sort, balancing it on a larger stick. This goes on, each stick getting larger.

The impressiveness of “Amaluna” goes beyond the actual show. Aside from those who participate in the actual show, Cirque du Soleil hires most of their non-performer employees city-by-city.

The tour requires around 60 people to set up the big-top tent, at least 100 local stagehands and more than 150 employees for ticket sales, hospitality hosts, ushers, concession stand attendants and more.

The performance brings together a cast and crew from 23 different nations, from the United States to South America to Europe to East Asia and the pacific islands totaling 115 permanent cast and crew.

You can still catch a performance through March 3, but shows sell out in advance so it’s best to buy tickets now if you’re interested. You can find a discount code for tickets here.

Shoes are painted and fixed to fit the Amaluna blue and gold theme. Photo by Yesenia Alvarado/The Et Cetera

Alix Croop rehearses on her aerial loop over a large water bowl as part of the performance. Photo by Yesenia Alvarado/The Et Cetera

After dipping her feet into the water bowl, Croop leaves the stage floating up in her hoop on Feb. 19. Photo by Yesenia Alvarado/The Et Cetera