Harvesters look to turn dull season around in postseason 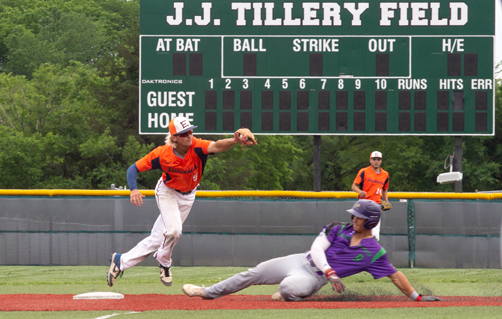 Infielder Jacob Manaska lunges to get the out at second in the game against Richland. Photo by James Hartley/The Et Cetera

It’s been a mediocre season for the Harvesters, but none of that matters now as they gear up for postseason play on Thursday against the Tyler Apaches.

Coach Michael Martin said Tyler has always been a tough team to go up against but is confident the Harvesters can put up a fight on the mound.

“It’s going to be a challenge, it always is,” he said. “They’re one of the better teams in our area, but most years we feel like we are too.”

The Harvesters finished third in the Dallas Athletic Conference with a 14-16 conference record. Martin said the team has been inconsistent in all aspects of the game this season but is confident in his team’s ability to make a run in the tournament.

“You don’t dwell on the losses and you don’t celebrate the wins,” Martin said. “You put them behind you and you move on to the next day. When it rolls around on Thursday, it’s a new season.”

Pitcher Tyler Stone has thrown 102 strikeouts so far and is ranked second in the nation. Photo by Skye Seipp/The Et Cetera

Tyler also struggled at the end of the season and lost seven of their 10 last games.

The Harvesters have shown they have plenty of power to generate runs. They are currently ranked sixth in the nation in home runs with 34. They have also recorded 121 extra base hits, landing them in 14th place, while their 101 stolen bases rank 15th.

They will have to face a strong pitching core from the Apaches, who hold a 3.88 ERA.

Pitching for the Harvesters has been a struggle. They posted a staff ERA of 6.70, compared to last year’s 4.39.

At the forefront of their pitching is sophomore Tyler Stone who has been the team’s ace, going 5-3 with a 3.84 ERA and 102 strikeouts for the season, which rank second in the nation.

“I’ve been able to control my pitches early and let them be effective to not really get in a position where I’m walking a lot of people,” he said. “I have struggled a few times in the early innings, but I’ve been able to find my pitches so I don’t have any trouble early.”

Martin said he plans to start Stone in Thursday’s game. Stone will have a tough team to pitch against, as the Apaches are ranked third in doubles (105) and ninth in RBIs (305).

This year has found the Harvesters in unfamiliar territory compared to last season when the team went 38-14 (.731) overall and had a 20-10 (.668) conference record.

Sophomore infielder Jacob Manaska said this year’s team has more newcomers on it, so much of the season has been spent learning how to work together.

“Last year we were just raw and we expected to go out there and win every game,” he said. “This year has been a little different. We’ve had more adversity, so I think the big thing is having to deal with that.”