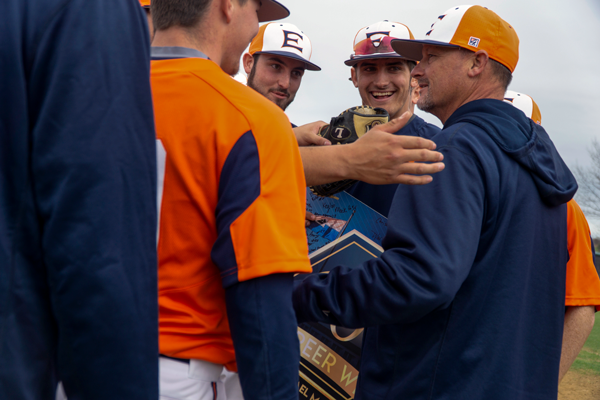 The Harvesters congratulate coach Martin with a poster celebrating his 600th career win on Monday after their 6-3 win against Rock Valley Golden Eagles. Photo by Yesenia Alvarado/The Et Cetera

After the game, Martin was given a poster and framed picture to commemorate the milestone achievement.

Second baseman Nick Balley said it meant a lot to see Martin reach 600 wins because he respects him so much.

“It feels good to be a part of a monumental experience in his life,” Balley said. “He’s already in the hall of fame. He’s got three national championships. So, for us to just be involved in whatever way possible just means a lot.”

While coach Martin’s winning tradition is well established, Balley says it’s his life lessons that make him more than just a great coach.

“At the end of the day, he’s not just coaching us, he’s trying to help us become better men,” Balley said. “Future husbands, future fathers, whatever it may be. He’s looking for us to grow more as men than anything else, and it’s clear with his coaching strategy.”

In Monday’s win, the Harvesters (12-8) were led by pitcher Tyler Stone, who gave up one run on two hits in six innings and struck out 11 of the 22 batters he faced.

“I just got ahead early, pounded them with strikes and forced contact,” Stone said.

Stone was dominant from the beginning, but it took the Harvesters’ offense until the bottom of the third to score their first run. The Eagles answered with a run in the top of the fifth to tie it.

In the bottom of the fifth, Jacob Manaska doubled to start the Harvesters’ biggest rally of the game, and Travarus Ansley ripped a triple to put the Harvesters back in the lead.

“It was nothing too special,” said Ansley, who finished 2-for-4 with three RBI to lead the Eastfield attack. “I just got a good pitch, took a good swing and didn’t get caught.”

Eastfield went on to score four more runs in the inning, keyed by another RBI triple from Jared Tipton, to make it 6-1.

The Harvesters maintained that lead until the eighth inning when the Eagles scored two off reliever Christian Del Bosque to close the gap to 6-3. However, Del Bosque retired the side in order in the ninth, giving the Harvesters the victory and Martin his 600th career win.

With 600 now behind him, Martin is ready to focus on the goals he has for the rest of the season.

“It was a good win,” he said. “I’m glad to have it behind me. We can move on with more important things that we’ve got to accomplish this year.”

Eastfield, ranked No. 8 in the latest NJCAA Division III national poll, will play the Northland Pioneers Tuesday at Eastfield.