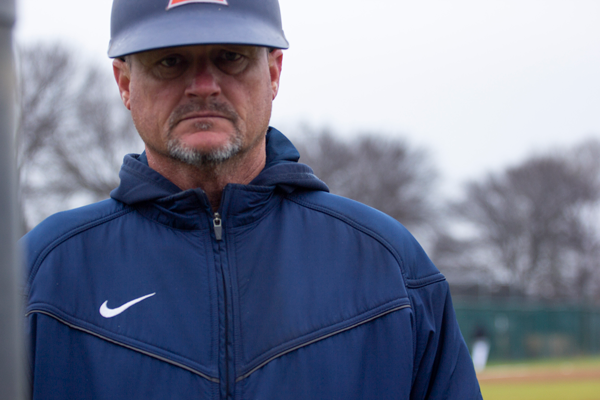 Eastfield baseball coach Michael Martin is on the verge of a milestone 600th win.

Martin recently sat down with The Et Cetera’s Francisco Longoria and reflected on his coaching career, the relationships he has developed with his players and assistant coaches, and the Harvesters baseball program.

What are your thoughts on your upcoming 600-win milestone?

To be honest, I hadn’t given it a thought before people started making a little fuss of this.

I look at my record at Eastfield College once a year and that’s just because I had to fill out a form and put on there how many total wins and losses I have.

That’s the only time I look at it.

Let’s start from the very beginning. What were your thoughts when you first got the job here?

Well, I had big shoes to fill. They were coming off winning the national championship, and I was excited about the opportunity. I felt like I was coming to a place that had some history to it. I thought it would be a good place to recruit kids to and to have a chance to compete at the highest level.

A lot of people don’t want to come in and take a job where the coach preceding them just won a national championship.

There are high expectations that come with that, but that was the part of the challenge for me. I wanted to try to maintain the level of consistency that this program had put forth.

Who would you say was your mentor during your first years as a coach?

Actually, it was my head coach in college that ended up recruiting me to play there, Pat Patterson, and his assistant coach who later became the head coach, Mike Cain. He was the man that actually gave me my first opportunity being a college coach and hired me to be an assistant at Louisiana Tech.

And before that would probably be my dad. He was a longtime baseball coach here in Dallas.

He coached at different high schools in the area, and I grew up learning the game from him mainly. So I owe a lot to all three of those guys.

Do you have any favorite or funny moments from your coaching career?

There was one year when the tornado warning signal horn that is right next to the field went off. It goes off the first Wednesday of every month, and we were out there playing.

I don’t know if it vibrated the ground or something, but a swarm of bees all of a sudden came over the first base dugout.

Then you could see the guys that were in the bullpen start kind of running and ducking in, and then you see [the bees] come over the field. The guy in the batter’s box kinda looks up and everybody just starts scattering.

The bees just passed across the field and went right over the third base dugout and left, but it sent some people scrambling.

With all the things you have achieved, have you ever received any offers from four-year universities?

There were a couple of opportunities for me to move on to scholarship junior colleges, but because I have two children that live in Louisiana, I was never making a move from Eastfield College unless it was going to get me a little bit closer to them.

There have been a couple of opportunities in the last 18 years, but it just wasn’t the right fit for me. This place has become home. 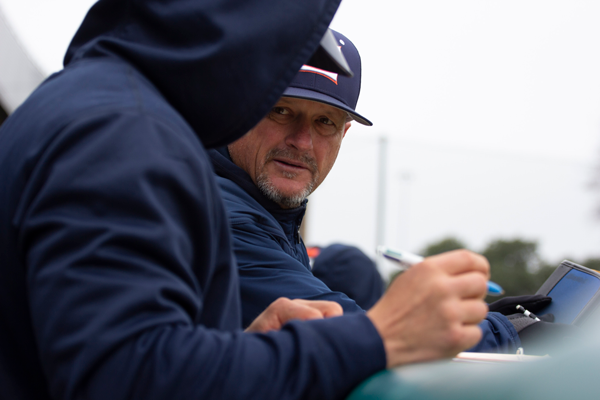 If you ever face your former coaching assistants, will you take it easy on them?

Oh no, and I know they’re not going to take it easy on me either. I’m as competitive a person as there is, and I want to win at every opportunity I get. It doesn’t matter who it is. If it’s a former assistant across the field, I know he’s going to go out there and beat me.

If they didn’t, then I wouldn’t have hired them as an assistant in the first place.

How did it feel when you won your first championship?

Man it was exciting. It 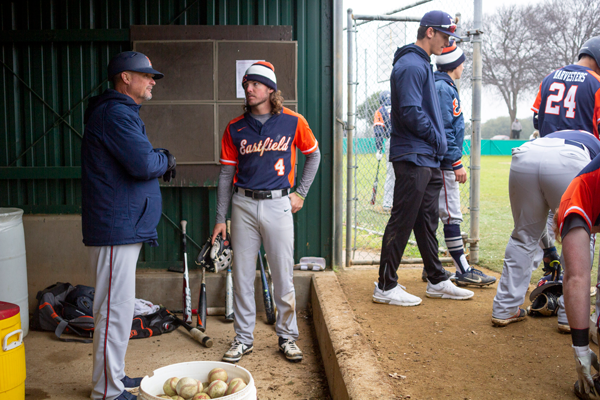 Martin speaks with his players during a March 2 game against Brookhaven. Photo by Yesenia Alvarado/The Et Cetera

was a lot of fun. It was a great experience for our guys.

We had an opportunity to go to the Baseball Hall of Fame while we were up there. And I’m sure that 90 percent of them haven’t been back.

It was a once-in-a-lifetime opportunity for those guys. So to provide those kinds of experiences for young men, that’s something they’ll look back at and remember forever. And then having an opportunity to win a national championship and win four straight games was pretty special.

Do you have any playoff heartbreaks?

Actually, probably our first year here. Back then the winner of the conference went to the national tournament.

I think we had to beat Richland two out of three, and I think we may have lost the first game, then we won the second game.

So it goes to the third game, winner-take-all, and you’re going to the national tournament.

I’m like, “We’re winning and we’re going.” I had my best three hitters in the lineup coming up, and if one of them could just hit it out one more time we were going to the national tournament.

I don’t recall if all three struck out or if they all flew out to the wall, but that one slipped away.

And that one kind of sticks with me for some reason.

Probably the championships, to be honest with you. It just comes down to seeing the players having those experiences, having those reactions, and then seeing the emotions out of the guys.

I told them that that’s what you do when you win the national championship.

You pile on the mound to celebrate.

So we had that inscribed on our first national championship ring: “Pile on the bump.”

How many years coaching do you have left?

I’ve got plenty of years left. I enjoy it. I enjoy these kids, the relationships that you make, the relationships that you build and seeing these guys move on. Those are my proudest moments. When they come back to say hello or to talk about what they’ve got going on in their lives, that’s what makes it special. It’s not about 600 wins. As long as I am happy, having fun doing this, making an impact on some of these kids’ lives in a positive way, that’s what it’s all about. That’s what I enjoy doing. I look forward to doing it every year.