Eastfield headed to Minnesota for shot at title 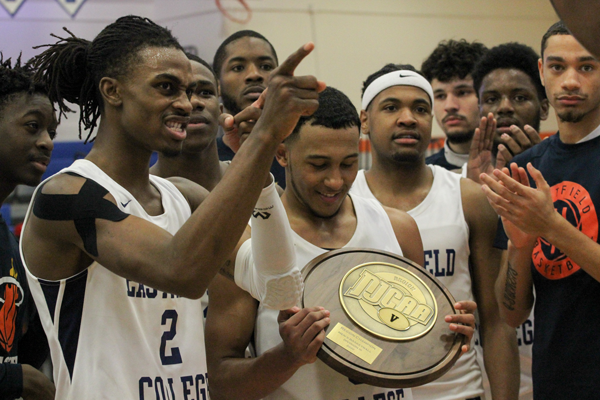 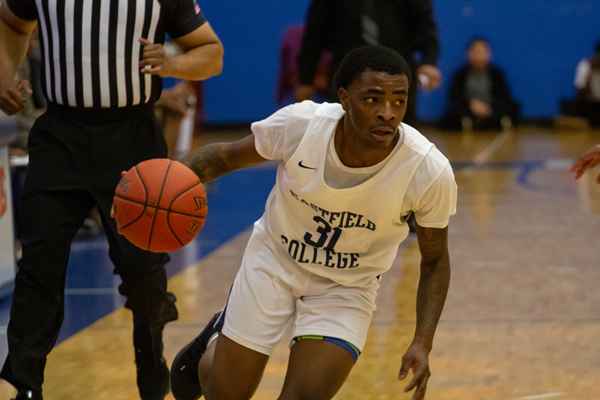 Ezekiel Fields dribbles across the Eastfield court in the game against Cedar Valley. Photo by Skye Seipp/The Et Cetera

Eastfield became the first team to claim a spot in the NJCAA Division III Men’s Basketball National Tournament in Rochester, Minnesota, after holding off rival Richland 63-61 in the Region V tournament finals on Feb. 22.

“This is life-changing,” sophomore guard Mike Aranda said. “This is a life-changing tournament so [we have to] bring our best and be ready… all our hard work is paying off and it’s showing, so we got to keep it going.”

The Harvesters will be returning to the national tournament for the first time since 2016, when they placed fourth.

“We got guys that can score from the three, from the two, attack the basket, dunk the ball, make free throws and defend as well,” coach Anthony Fletcher said. “This is a good group. They’ll be right there battling with those other [teams].”

The Harvesters, who were the top seed after being crowned regular season co-champions, won a pair of close games in the Region V tournament by a combined six points to take the title. Eastfield got a scare from the No. 4 seed Cedar Valley in the semifinals but mounted a comeback after trailing at halftime to down the Suns 84-80.

“We just had faith in each other the whole time,” forward D’Angelo Smith said. “That’s what we’ve done all year. … We just had a feeling it was our time.”

In the finals against Richland, the two teams were neck and neck the whole way. It was a back and forth game that came down to the wire in front of a loud crowd, but in the end, the Harvesters came up clutch. 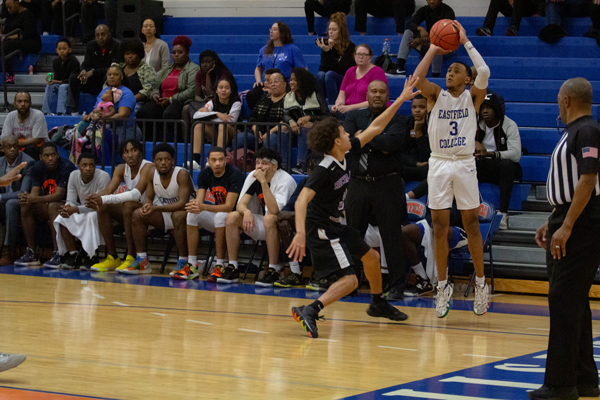 TaMarcus Butler’s 3-pointer from the right arc with only 40 seconds remaining carried the Harvesters to the win and an automatic bid to the national tournament.

“Huge,” Fletcher said about the shot. “That was awesome. That’s a great moment for him. It’s going to be a moment he’s going to remember for a very, very, very long time.”

The Harvesters have climbed to No. 4 in the national rankings and stand at 26-6 heading into the national tournament.

Since Eastfield is now in the top four, it will receive a bye in the first round, Fletcher said.

Tournament play is set for March 11-14 at the Rochester Regional Sports Complex. The National Committee will announce the seeding for the tournament on March 6.

“Once they start seeding, they’re going to be looking at every game,” Fletcher said. “So, every game really counts … It was exciting to see us get the fourth ranking in the country and knowing that was the last poll we couldn’t go up or down.”

Eastfield will wait until Friday to see what their seed will be in the national tournament. In the meantime, the players continue to grind it out in practice in anticipation of the upcoming opportunity.

“The intensity’s always been high,” freshman center Tyrese Davis said. “We’re always going at each other. We practice very hard. Eastfield practices different than regular practice. We’ve been going to film after practice, making sure we’re locked in … because thpurpose is to win this national championship.”

The Harvesters averaged 95.9 points a game this season and will bring their fast-paced, high-powered offense to Minnesota. They also managed 44.1 rebounds and 18.4 assists.Fletcher knows what it’s going to take for his guys to bring the title back to Mesquite.

“[We’ve] got to play defense, got to defend,” Fletcher said. “That’s the number one thing. Then, we have to make some shots. And a lot of the times for a championship, you have to get lucky too. We’ve just got to go out and take care of our business and play Eastfield basketball; get stops, rebound the ball at a high level and we’re good.”