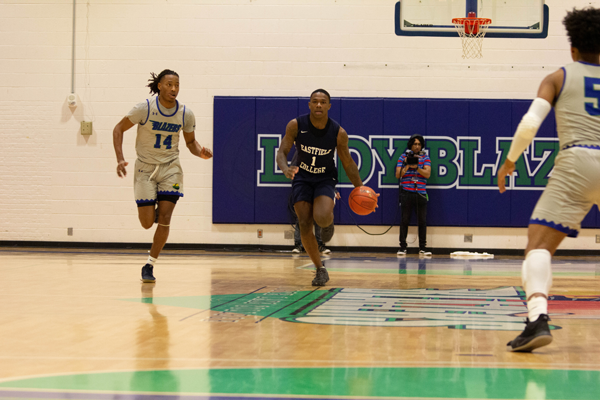 D’Angelo Smith moves up the court against during the final game of the regular season at North Lake on Feb. 15. Photo by Rory Moore/The Et Cetera

With their final regular season win over North Lake last week, and some help from a loss by Richland, the Harvesters are the 2020 Region V co-champions.

Calvin Williams goes for a layup in their final win of the season at North Lake on Feb. 15. Photo by Rory Moore/The Et Cetera

They have secured the No. 1 seed, a first-round bye and the right to host the first round of the district tournament. With the regular season now in the books, the Harvesters’ attention shifts toward the postseason tournament and chance for a national title.

It’s been four years since Eastfield’s last appearance in the NJCAA Division III national tournament, but the Harvesters have been winning all season and they believe this could be their year. Coach Anthony Fletcher is excited about the team’s success this season.

“It does mean a lot to us,” Fletcher said. “Not just the program, not just the [team], not just me, not just my family, not just these kids’ families. It could be life-changing, this game of basketball … I’m really excited for those guys and super proud of them.”

To get back to the national tournament, the Harvesters have two paths. Either they can win the district tournament this week and get an automatic spot, or they could claim one of the at-large bids being awarded by the NJCAA this year.

The NJCAA is doing the postseason tournament a little differently. The district tournament began Tuesday and will conclude on Saturday. It features Regions 2 and 5 with the winner advancing to Rochester, Minnesota and the national tournament. Now, there will be four extra teams included, making 12 teams instead of the previous eight at nationals. Besides the conference winners, four at-large bids will be awarded by the NJCAA to the most deserving teams based on national rank and strength of record.

Due to the NJCAA giving out those bids to the tournament, the Harvesters could be in great shape to claim one of them because of their record and their ranking in the national poll, despite what may happen in the conference tournament this week. 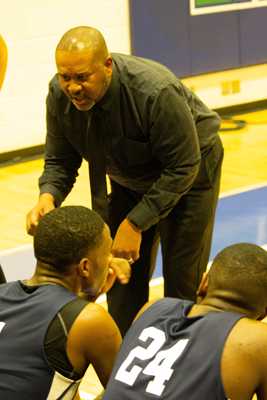 Coach Anthony Fletcher talks to players on the sideline of the last game of the regular season against North Lake on Feb. 15. Photo by Rory Moore/The Et Cetera

“With the bid system now, if you don’t win the conference tournament you can still have a chance to get to the national tournament,” Fletcher said. “That means every game counts. Every game is almost the same.”

The first thing they’re going to look at is win-loss record, then they’ll look at how you did against really good teams and things like that. Every game is basically for your resume to get to the national tournament.”

The Harvesters head into the playoffs on a high note, having won their last two games against conference opponents Mountain View and North Lake and finished with a record of 24-6. Last Saturday against North Lake, the Harvesters got it done on the road to cap the regular season. It was a tough, physical matchup but the Harvesters led for most of the contest and they hung on to win 75-67.

The Harvesters won without starting point guard DuJuan Ridgeway, who was ejected in the previous game. Without Ridgeway, other players had a chance to make an impact including freshmen Kyree Rogers and Ezekiel Fields. Even with all the hard fouls and charge calls during the game, 38 team fouls in total, Fields sees the challenge as just another day at the gym.

Rogers knows how important that last win was not just for Eastfield’s confidence but for playoff implications as well.

The Harvesters will play at home Thursday night against the lowest remaining seed from the opening round which will be #4 Cedar Valley, #5 Mountain View or #6 Brookhaven College.