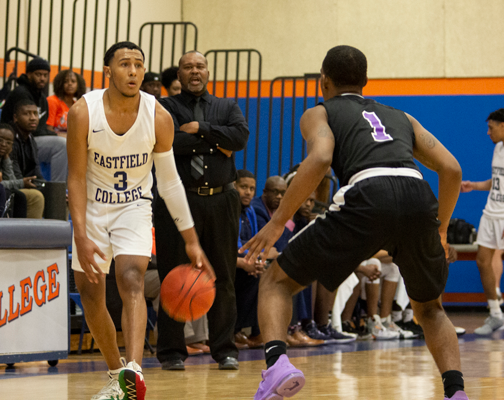 Guard Calvin Williams looks to set up a play against Richland in their 84-75 win on Jan. 15.  Photo by Rory Moore/The Et Cetera

The Eastfield Harvesters flew past the Richland Thunderducks in an 84-75 win on Wednesday night. It was the first time in history two schools from the Dallas Athletic Conference faced each other as the nation’s top two ranked teams.

Eastfield went into the game ranked second in the nation and improved to 19-3. They will wait to see if this win lifts them to the top spot in the polls on Monday after beating the No. 1 Thunderducks.

Exciting plays characterized the game, including a 13-4 run by the Harvesters to end the first half after being down 20-18. They never gave the lead back after that.

“We played aggressive,” forward D’Angelo Smith said. “We came out, had a good start and they came back, but we just took off after that.”

Eastfield has lost its last four meetings against Richland, which made the win even sweeter for Smith.

The Harvesters’ next game is on Saturday at 1 p.m. against the Brookhaven Bears at Eastfield.