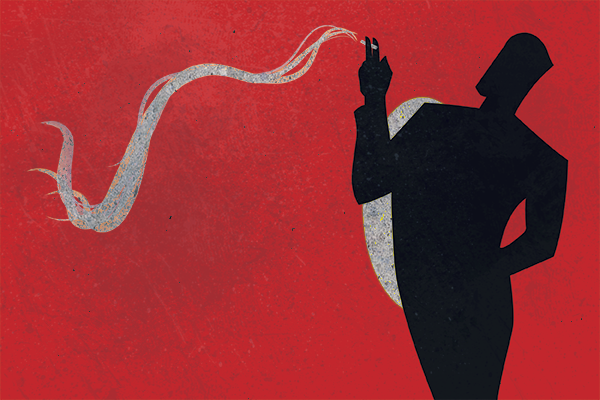 There is a war against smokers. When one thinks of discrimination, it’s usually on the grounds of race, sex, religion or orientation. But this is a newer breed of intolerance.

This cloud hangs heavy in the hearts of tobacco users nationwide. This is a modern and socially acceptable form of discrimination.

This is judgment delivered from atop a moral high horse by legislators and administrators.

We’ve heard the anti-smoking agencies and what they’ve had to say. Now it’s time for the black-lunged army to have a turn. We just need a minute to catch our breath first.

Some may say, “Just stop smoking,” but it’s not up to this campus or its administration to try and influence the personal decisions of their students or staff.

Adults who make the decision to expose themselves to the potential of early onset health issues still deserve a place to feed their legal addiction.

Despite the health risks, tobacco is a legal vice, and individuals of age have every right to make their own decisions in regard to their personal health.

Reasonably enough, due to the effects of secondhand smoke, smoking is prohibited within most building spaces in order to protect the shared air of surrounding individuals.

However, the restrictions have gotten so out of hand that even outside and open-aired spaces are policed with the same intolerant vigor.

Even chewing tobacco is entirely prohibited on campus despite the fact that there is no risk of secondhand exposure.

A smoker in today’s world is often made to feel like a second-class citizen.

They’re told where to congregate and how far away to stand from almost every building.

No one is asking for the ability to light a cigarette or smoke a vape within the confines of a classroom. That would simply be ridiculous.

But now even the simple freedom to smoke outside is under attack, and personally I’ve had enough. There used to be a matter of compromise between establishments and tobacco users when it came to the designation of basic smoking areas.

It’s a simple, cheap and easy compromise. Invest in a bench and a large outdoor ashtray or smoker’s station and the problem is solved.

Where is this compromise at Eastfield? It’s obvious that the third-floor patios in the C Building are ideal for this purpose. Far removed from the risk of exposing other students to the hazards of secondhand smoke, these areas are practically begging to accommodate the smokers of Eastfield and provide a convenient yet out of the way place for that section of the student population to congregate, socialize and, most importantly, to smoke between classes.

Instead, the smokers of Eastfield are forced to rush across campus between classes and isolate themselves in personal vehicles that have turned to ovens during Texas summers.

Campus police are directed by the campus tobacco policy to ticket smokers in the parking lots if they are even standing outside of their own vehicles or smoking while sitting in their cars without shutting the door before lighting up. It may sound extreme, but I’ve experienced these injustices firsthand.

Eastfield claims to support individuality and free will, yet administrators have decided to adopt a totalitarian mindset when it comes to the discrimination of informed adults over their own personal choices.

This isn’t high school. This is an institution of higher learning attended by adults who have the right to make their own decisions.

The propaganda and encouragement of intolerance from anti-smoking agencies has gone too far.

The smokers of Eastfield deserve respect and consideration, the same as any other student.

Is a patio really too much to ask for?