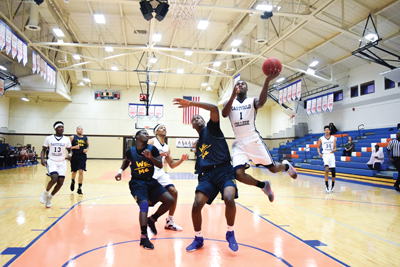 D’Angelo Streeter leaps for a layup in the Harvesters 141-74 win over Paul Quinn College on Nov. 4. Photo by Andrew Gonzales/ The Et Cetera.

After starting their season 11-1, the Harvesters basketball team has moved to No. 1 in the nation.

Eastfield is second in the nation for assists and rebounds, averaging 27.8 per game and 51 per game, respectively.

Their only loss was to Temple Junior College, 121-118. Temple, a Division I school, has also played against fellow Dallas County Community College District college Richland, who lost to them 95-81 on Nov. 18.

Shooting guards D’Angelo Streeter, who leads the team with an average of 17 points per game, Zack Duncan, who averages 13.8 points a game, and Ishmael Hook, who scored 28 points in a single game Nov. 22, have each been named Metro Athletic Conference Players of the Week.

Streeter is shooting 50 percent from the field.

“I feel like after all the work I put in, it’s finally showing,” he said. “I think there are places I can improve at like rebounding. [I take it] one day at a time and try to make the best out of every practice.”

Guard JJ Murray gets fouled while jumping for a layup against North American University. Photo by Andrew Gonzales

Duncan is shooting 46.5 percent from behind the 3-point arch.

“I’m really excited about this year,” Duncan said. “We are playing well as a team. I’m a leader on the team. I will do whatever the team needs. I feel like we need communicate better and work on our defense.”

The team leads the nation in 3-pointers attempted with 33.4 a game.

“They are playing great basketball,” coach Anthony Fletcher said. “They are shooting the three ball really well. Probably the best since I’ve been here percentage-wise and also in makes.”

The Harvesters are full of guards. On any given night, Fletcher can start five guards.

“Guard play is big for us,” Fletcher said. “If we start five guards, a team will have to guard a four or five man. And who is tough enough to do that? Guys can get more minutes [playing] by being tough enough.”