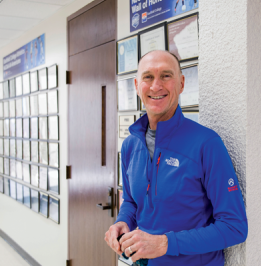 Former basketball coach Bob Flickner teaches physical education and has been with the district for 40 years. PHOTO COURTESY EASTFIELD GRAPHICS

The Harvesters won a national title in 1997 under his guidance.

In his 23 seasons as head coach, Flickner racked up 423 wins and ended his conference career with a 178-44 record.

He led Eastfield to 12 consecutive conference championships and 15 in a 16-year span. His teams routinely played in the national tournament between 1986 and 1998.

Flickner served 14 years as the director of athletics on campus and was the NJCAA Region 5 representative for several years.

Flickner is now a physical education professor on campus. He was honored at the spring convocation ceremony for 40 years of service to the district.