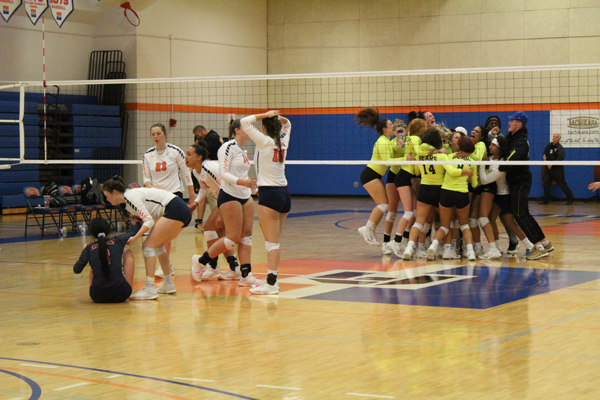 The Harvesters ended their season after losing to Brookhaven on Nov. 2 at home. Photo by Brianna Harmon/The Et Cetera 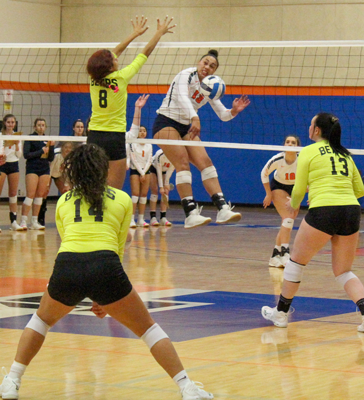 After being up 2-0 in the Dallas Athletic Conference tournament championship game, the Eastfield volleyball team lost the final three sets to Brookhaven, preventing the Harvesters from advancing to the national tournament for the first time in four years.

Eastfield had two ball-handling errors at pivotal times, including the last point of the match when a bad pass went into the net, ending their season.

“It felt like we had already won,”  Courtney Edge said of the early 2-0 lead. “But Brookhaven is the team if they are down two sets to none they will come back. They aren’t going to give up.”

Edge had three service aces, seven assists and 37 digs for the Harvesters. All-American Courtanae Calhoun led the team with 16 kills, and Williams and outside hitter Catherine Mudd followed with 15 kills each.

“I didn’t expect to not win,” Edge said. “I fell to the ground when we lost. It’s really hard. Right after this me and my dad were supposed to go get a dress for the national banquet. I was just like, ‘Wow, we really just lost in five sets.’”

Eastfield finished the season 19-11, including 10-0 in conference play, making them conference champions.

The Harvesters were ranked ninth in the nation in the final poll. 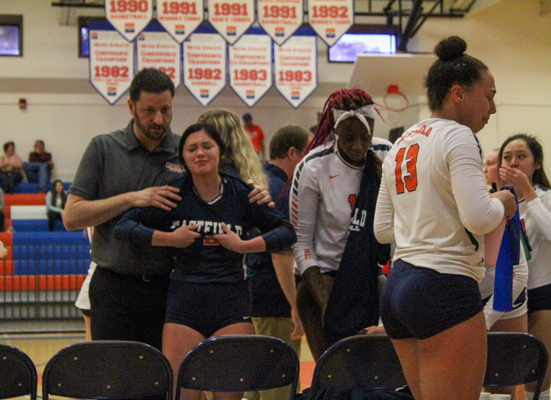 Coach Brandon Crisp talks to Courtney Edge after Brookhaven beat the Harvesters on Nov. 2.The loss ended their season and marks the first time in four years Eastfield hasn’t made the national tournament. Photo by Brianna Harmon/ The Et Cetera

“I’m super hurt,” middle blocker Sydney Williams said. “But I’m also super proud. There were points where there was a huge gap, and we could see on each other’s faces that we didn’t have it. But we came back as a team to keep it close until the very end.”

Mudd sat on the bench after the match in shock, unable to grasp that the Harvesters had just lost.

“I was sad and I was mad, but at the same time I was feeling so many other things, so it blurred into nothing,” she said. “I feel like I could have done more all five sets, but I also know we did the best we could.”

Coach Brandon Crisp said he is proud of what his team accomplished this season and how they played against Brookhaven, despite their mistakes.

“I feel good about the game. We played well,” Crisp said. “We just had a few too many errors, and they capitalized on that. I loved that they kept fighting. We have had some tough matches that we pulled out. This team has had to overcome some adversity.”

Earlier in the season Eastfield lost outside hitter Mollie Booth and right front Skylar Fowler to injuries. Both were unable to play in the tournament.

Over the season Eastfield players won several conference and national player of the week awards.

Crisp said now that the season is over the Harvesters will begin off-season workouts to prepare for spring season.

“There is never an off time,” Crisp said. “We have to recruit, sign and develop the freshman for next year to be leaders. We want to find the sophomores new homes to play for. We are just going to keep going and working hard.”