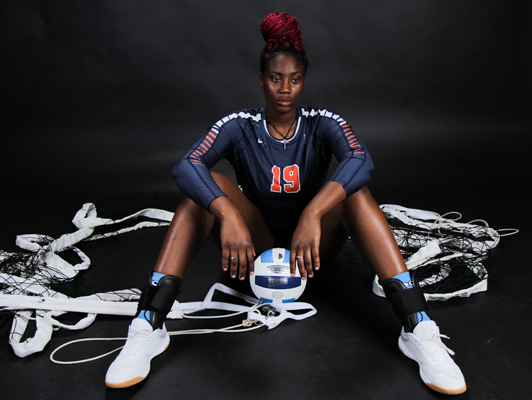 Blood poured down Courtanae Calhoun’s face as she hurried down the street to escape her abuser on her 20th birthday. Moments earlier, he had hurled a jewelry box at her head, causing a gash. 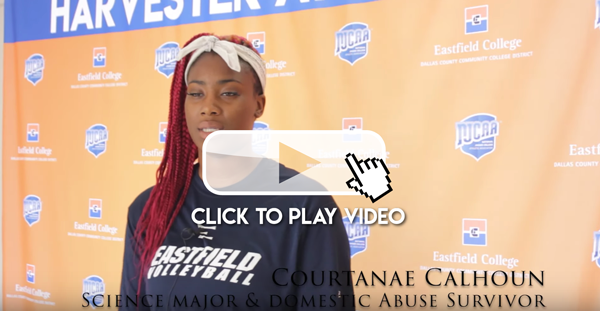 “Can I use your phone?” she shouted at a Subway employee as she barged through the door, quickly locking it behind her. After calling her father to come pick her up, Calhoun waited anxiously as the employee talked with her to make sure she was OK.

“My jaw was crooked,” she said. “He offered me a sandwich, and I couldn’t even eat it.”

Her father arrived at Subway within five minutes, along with police officers, who escorted her to get her belongings. 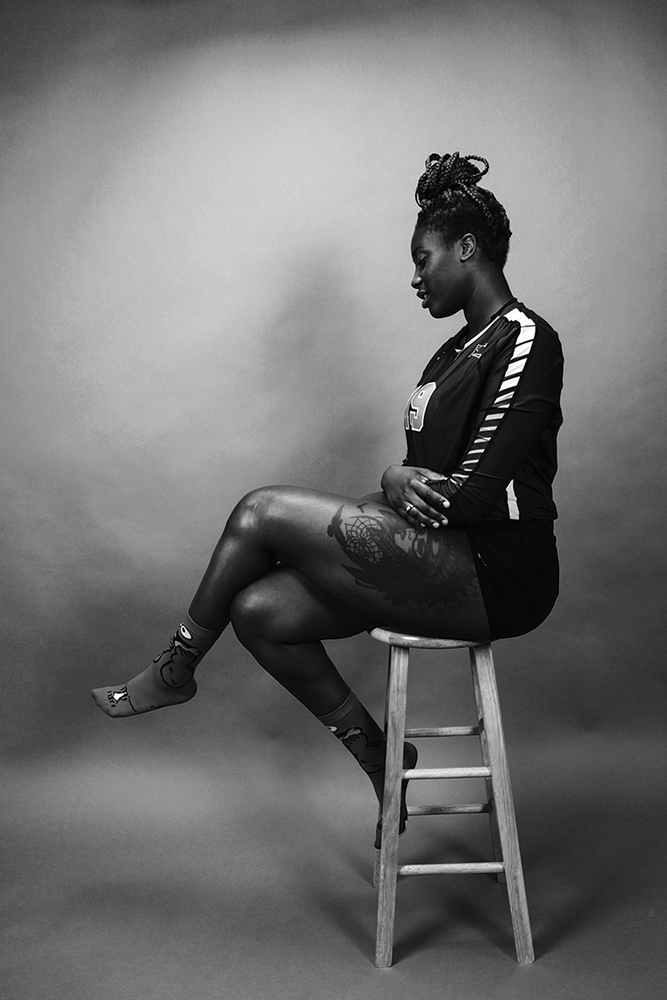 In the Subway parking lot Calhoun broke down and made the hardest decision of her life: telling her dad about the two-year abusive relationship with her boyfriend that had gotten progressively more volatile.

“I lied to everyone,” she said. “I didn’t want anyone to know. I was scared because if somebody did know, he would have took my life. Every person I have told has broken down and bawled their eyes out. No one could understand how someone could hurt me so much.”

The abuse got so bad that the freshman All-American stopped showing up to offseason volleyball practice in 2017. She stopped attending classes. She stopped hanging out with her closest friends.

At one point she even considered suicide.

When Calhoun’s father brought her home, the cars of family members lined the street in front of her house. Finally, she felt free.

“I didn’t know I was that special to people,” she said. “I had so many people risk whatever they had going on for me because he put so much pain in my heart that I’ve never had.”

On July 26, 2018, after that final act of abuse, Calhoun ended the relationship and focused on rebuilding her life. She knew she wanted to get back into school to finish her education, but the main goal was getting back on the volleyball court and eventually playing professional volleyball overseas.

During a two-a-day practice before the 2019 season started, Calhoun broke down with tears of joy as she got the news from coach Brandon Crisp that she could rejoin the program. Her first week back, Calhoun was named National Junior College Athletic Association Region V Player of the Week for Aug. 25-30.

Calhoun dominated against six NJCAA Division I schools to start the season. She had 18 kills against Pratt Community College and added 10 more against Dodge City. Against No. 8 Navarro, she posted a team-high 14 kills and a .320 blocking percentage.

“It felt like I was back home,” Calhoun said. “I thank my team because it takes the team for me to even get that. It felt good to know I still have it within me. I didn’t know if I was going to step back on the court. I thought I had lost it forever. I let a relationship get in the way of my dream of playing overseas.” 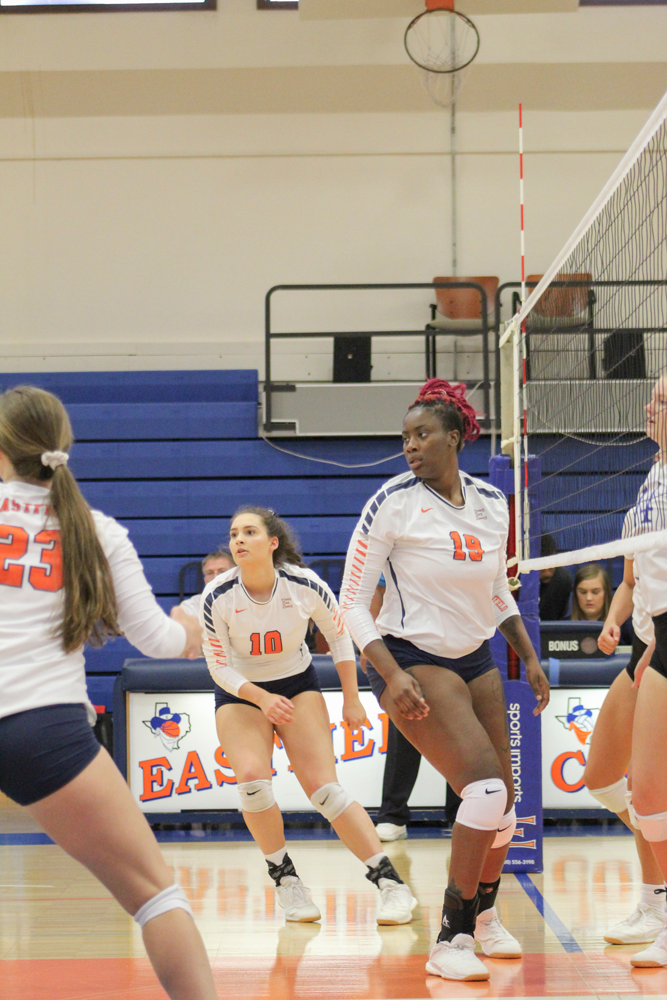 Back in 2016, Calhoun was on the top of the world. She was playing middle blocker for the Harvesters and was just starting a new relationship. When they began dating, her new boyfriend opened every door for her and treated her with respect. After a year, they moved in together.

Then, one day, his charm turned off.

“I started getting hit for irrelevant things,” she said. “If I didn’t do something good enough, I’d get hit for it. It tears you apart and makes you feel like you can’t do anything.”

Calhoun’s academics began to suffer. She was more focused on hiding the marks on her body than studying, and she was eventually placed on academic suspension.

Her time off the court and out of school destroyed her. She began to lose who she was a person. Thoughts began to run through her mind that she wasn’t good enough. She thought her nightmare would never end.

Former teammate Breanna Wormley recalls a time after Calhoun’s suspension when she was invited to hang out with the couple at their apartment. When she arrived she heard them arguing.

“I never had seen them fight before,” Wormley said. “When you’re in front of friends you try to seem like the happy couple.”

When Wormley later found out about the physical abuse, she was heartbroken.

“I wanted to kill him,” she said. “You just don’t do that. You don’t put your hands on women.”

During the 2016 season Faith Faulkner, Nyjah Meadows, Wormley and Calhoun were inseparable. It was a tight bond that turned them into family.

“Everyone was always over at our [Meadows and Wormley’s] apartment,” Wormley said. “We were always cooking for everybody. I have never had friends like that. It was like magnetic. We clicked.”

When the abuse started, Calhoun began to make excuses why she couldn’t hang out with the group.

After escaping the relationship, Calhoun still had time left on her academic suspension.

She used it to get back into shape and sharpen her studies. She spent many nights in the gym working out and in the library studying.

Crisp says that Calhoun has put in immense work to get where she is now.

“It brought a tear to my eye when I saw she was named player of the weak,” Crisp said. “I’m very proud of her and the things she has accomplished.” 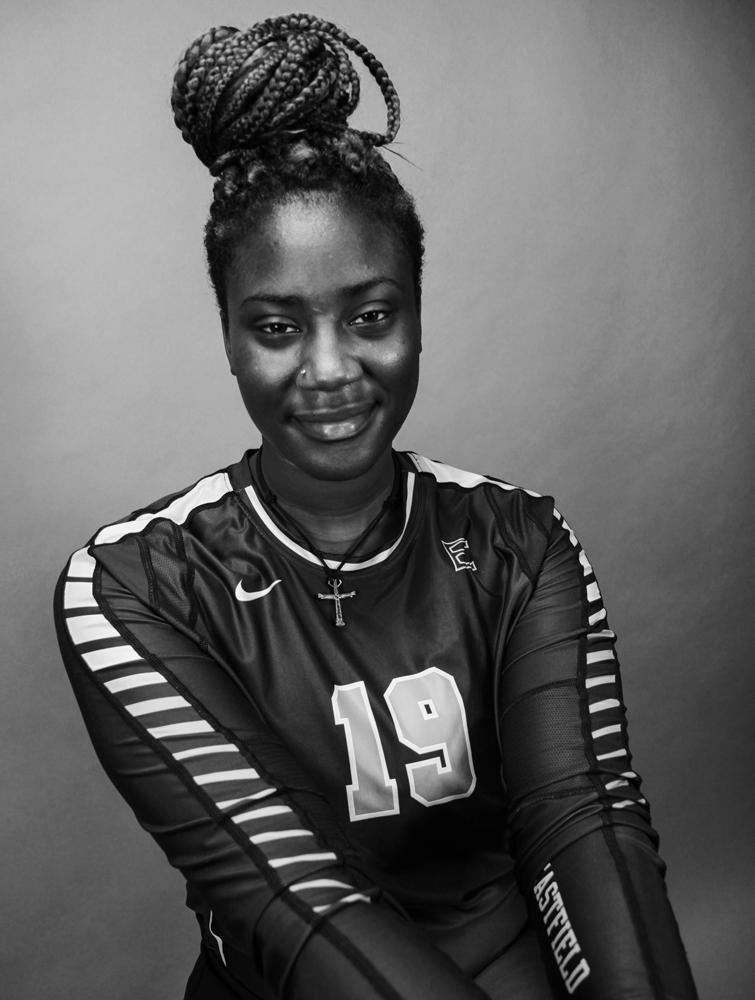 “It’s one of those laughs that makes you laugh,” she said. “She is the nicest person you will ever meet in your entire life. The thing about Court is, if you show her you care about her once, she will always have your back. The two best words to describe Court are caring and strong. She has grown mentally stronger.”

Calhoun says being on the court again feels like coming home.

”Volleyball is my passion. It’s what I love,” she said. “I honestly thought I would never play again. I am blessed to have another opportunity.” 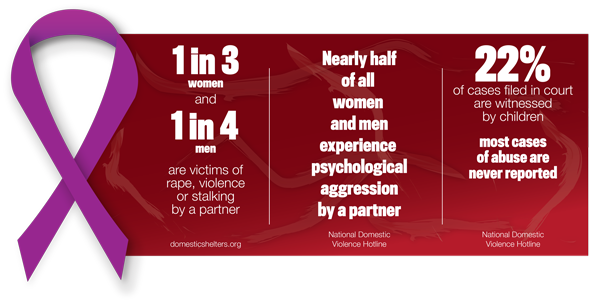