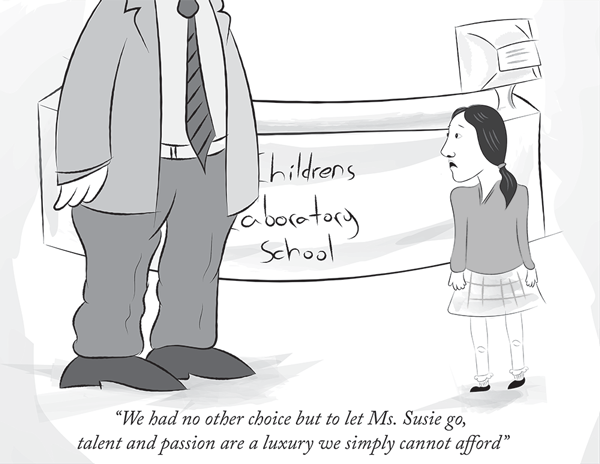 Eastfield employees in the Children’s Laboratory School in the K Building discovered they would be laid off in a move that President Eddie Tealer said was to help benefit students that are in need of child care.

With no prior conversation with the parents or employees, Tealer and the leadership dropped the bomb on workers in the K Building during the first week back at school, while parents found out in an email from the dean of Social Sciences, DeShaunta Stewart.

If the Eastfield leadership team wants to help students who need access to child care, we are fully supportive of that decision. But not being transparent with the employees, some of whom have worked here for more than two decades, is just wrong.

Eastfield is supposed to be like a family, and the employees in the K Building are doing a great service for the faculty and staff on campus who use the Children’s Laboratory School.

By telling these workers they will no longer be employees and that their options are to either go on a probationary period with a new company or apply for other positions in the district does little to offer reassurance.

Put yourself, Eastfield leadership team, in the position of these employees. If someone came to you and said you would no longer be a district employee, but that you would be put on probation with another company, would you feel confident in your job security? Would you feel valued by the district?

No one would argue with the objective of helping students, but they currently have options that aren’t being used.

What dream are we trying to achieve here? Not only is the college disrupting the lives of people whose job is to take care of children, but what about the faculty, staff and administrators who pay for this service?

The Children’s Lab School is not cheap, and failing to be forthcoming with the people who are the current investors in the program lacks integrity.

It seems as if the only people the college is considering in this move are students.

While students should be important, we are temporary. Your faculty, staff and admins are the people who will take this school to new heights if given the proper tools to succeed.

But doing business deals behind their backs and leaving them wondering where their future paychecks will be coming from or how they will be able to support their own families is not transforming lives in a positive way.

According to the National Association for the Education of Young Children, one of the most important qualities of a teacher in early childhood is passion. It’s hard to remain passionate when you’re stressed out about where your meals will be coming from at the beginning of the new year.

On the Eastfield website, the second goal of the school is to “foster employee success.” Yet it appears you’re trying to limit the number of employees you have to foster.

And let’s not forget about your employees’ children. Since this district doesn’t offer much by way of maternity leave, faculty and staff who are new mothers are likely to begin using the Children’s Laboratory School at an early age. These kids have formed attachments to some of their teachers, and now these relationships could be broken.

The leadership team has a responsibility to everyone on campus. Outsourcing the work in the K Building and giving little information to those most affected by the change does not represent good stewardship.

Instead of letting a group of employees go and changing services paid for by some of your colleagues, have a conversation with them and maybe collaborate a little on other options.