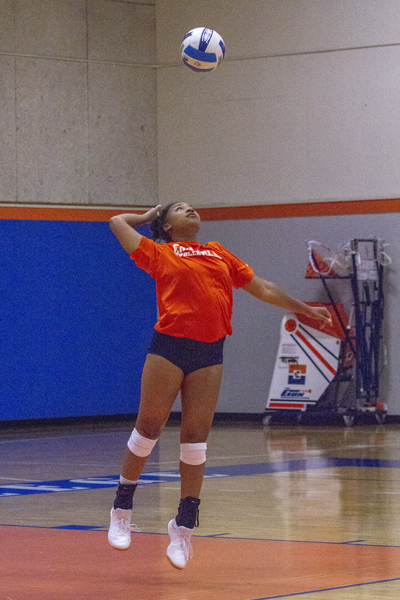 The Harvesters prepare for the start of their season with the fifth annual navy and orange intra-squad scrimmage game on Aug. 9. Photo by Skye Seipp/The EtCetera

Eastfield volleyball captain Catherine Mudd surveyed the court as she walked down the net shaking hands with the players from Owens Community College. Her eyes were locked on her teammates as they fell to the floor heartbroken over their loss in the national championship match.

“I remember being completely blank with no feeling at all,” Mudd said.

During the van ride back to the hotel, Mudd gathered her feelings about the loss. Once upstairs and settled in the hotel, she was ready to talk. She looked at her teammate Kylie Cobb and vowed, “We are going back.”

The Harvesters were down two sets to Owens when they fought back to tie the match in the fourth set. In the fifth set the Harvesters lost by two points, ending their season.

This year, Eastfield enters the season ranked No. 2 in Division III in the National Junior College Athletic Association pre-season polls.

“We just use it as fire and fuel going into this season,” coach Brandon Crisp said. “I tell the girls it’s not that we lost. It’s that we came two points shy. I still think we played one of the best matches I’ve ever seen in my life. We just use that as a little bit of a heartbreak. We were that close, so let’s go finish it.”

“I’m hoping I can be a positive role model and keep the encouragement going,” Cobb said. “I hope to keep everyone in the right mindset. If you are negative, it is just a wasted day.”

The Harvesters will also be returning Courtanae Calhoun, who played on the team during the 2016 season and then took a few years off from school. The team finished third in the national tournament with Calhoun being named an All-American. During the 2016 season Calhoun led the team in kills in 259 as a freshman.

Crisp is confident in the depth and grit of the team’s roster.

The Harvesters have been to the national tournament the past three seasons in a row and were ranked in second place in the nation heading into this season. Photo by Skye Seipp

“We have really been promoting intensity with our team from day one,” he said. “Playing-wise I think this is our deepest team yet.”

During the Aug. 10 scrimmages against Navarro, Seminole State and Frank Phillips, Crisp used nine different roster lineups. Each set he would switch positions the athletes would play so that not one lineup was alike.

Freshman outside hitter Alyssa Johnson said the practices allowed her to learn the playing styles of her fellow teammates.

“It is challenging to play with each other,” Johnson said. “I’m ready to get out on the court. We can only do so much of what we want to in practice. Whenever we all come together in a game, it is something really special.”

Freshman outside hitter Emily De La Garza looks to bring her energetic personality to the court to keep the morale of the team high.

“I didn’t know what to expect from other players, and how we would all mesh together with there being so many people and so many positions,” said De La Garza. “But I feel like we are all pretty equal and the talent on the team is really, really high.”

De La Garza says her favorite things about the team are the competitiveness and family atmosphere. De La Garza credits the feeling of camaraderie to Crisp’s coaching style.

“It’s not people just coming here to play, and that’s what I really enjoy about this school,” De La Garza said. “He really respects us. He respects the game. He really cares about each and every one of us.”

The Harvesters opened their season on Aug. 22 at Southwestern Christian College. Conference play will begin on Sept. 23 at North Lake College at 8 p.m.