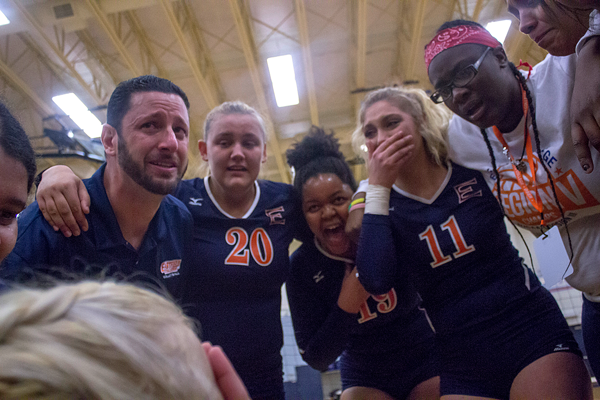 The Harvesters volleyball team huddles in celebration after their 2017 national championship winning game. Their championship was the first for a women’s sport in Eastfield history. The squad will return to Rochester Nov. 6 in a fight to defend their title. Et Cetera file photo.

The Harvesters (9-1) are in Rochester, Minnesota, to defend their 2017 volleyball national title. The team will play their first game Nov. 8 at 6 p.m. The opponent is yet to be determined.

Find all the essentials to enjoy the game from Rochester or in your living room here at Eastfieldnews.com.

The Et Cetera’s James Hartley will be in Rochester to bring you updates on all the action. For live updates watch James on Twitter, @ByJamesHartley, and The Et Cetera on Facebook, Twitter and Instagram, @TheEtCetera.

Matches can also be live streamed at njcaatv.com.

This national tournament schedule is dependent on the Harvesters winning each prior game and may change. 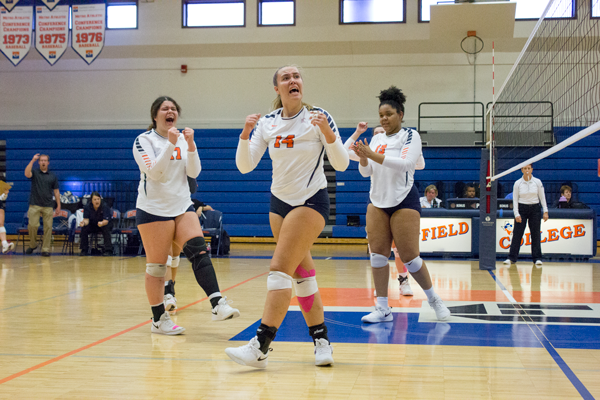 Last year’s Harvesters were undefeated in conference play, but Crisp said it’s been a rockier road this season.

“It hasn’t been an easy season,” Crisp said. “But I like how we’re playing at the end. We’re playing much, much better now.”

Before the season started, Crisp said this year’s Harvesters had the potential to be better than last year. They’re beginning to live up to that now.

“I think the last conference game against North Lake and then the regional finals are the best I’ve seen them play,” he said. “So they’re definitely peaking at the right time. This team still has a lot of potential, it’s just up to them to play with that.”

This year’s Harvesters are third in the nation in kills per set and are ninth in digs per set.

The Harvesters have had four Dallas Athletic Conference Players of the Week and two players recognized nationally this year.

The Harvesters went 9-1 in conference play this season, with sophomore libero Maura Munoz ranking eighth in the nation in digs and sophomore outside hitter Keishla “Kiki” Reyes ranking 17th in kills.

The No. 3 seeded defending national champions will first play the winner of a match between Northampton and Lorain County.

Crisp said that the team knows it won’t be easy to repeat as national champions.

The national championship tournament brings new challenges: a different size serving space, uncertainty of what to expect from unfamiliar teams and a longer tournament that could affect the team’s energy.

“I feel like coach has done a good job this year of scheduling games and making this season, in a way, as hard as possible,” Munoz said. “He scheduled us against Division I and Division II teams, and they were working us. We were tired. And he was like, ‘No, you’re staying in. No subs.’ And so you just have to stay in. But if you really want it, it doesn’t matter how long you’re in.”

Munoz said the anticipation for nationals changes the intensity the squad feels in practice and in games at the tournament in Rochester, Minnesota.

“I feel nervous, but in a way that nervousness turns into excitement,” Munoz said. “It makes my heart race, makes me want to move faster. Since I play back row and I am a digger, I’ve gotta hustle a little more. I seem to wake up a little more.”

Reyes, last year’s national championship MVP, thinks being in Rochester will give the team more motivation and help them play to the best of their ability.

“Once you’re there, once you step on the court, that’s what did it for me last year,” Reyes said. “Once I stepped foot on the court in practice, in the gym, I was like, ‘Oh, yeah. We’re here.’ That’ll help wake up people.”

Middle blocker Chloe Hope said the past few weeks have built up her confidence in the team’s ability to repeat as national champs.

“If you had asked me a week ago, I would have been nervous,” Hope said. “I think in the past week, our team has really gotten our groove together. We’ve really had a roller coaster up and down this year. But this last week of practice and games we’ve had a lot of energy and played like a team should. I’m way more confident going in now.”

The national championship fight won’t be any easier, Crisp said.

“I think we’re going to see some good volleyball at nationals,” Crisp said. “There’s a reason why they’re there.”

Eastfield’s team size — 19 women compared to last year’s 15 — has provided more competition during practice and more opportunity to build their skills and compete with each other for starting positions.

Sophomore setter Kalli Caddell said that has made a big difference.

“We were able to play six-on-six during practice and have a full-on scrimmage,” Caddell said. “So I think the practices have changed. They’ve been a lot more intense.”

Hope said that competition between teammates has created an atmosphere where the whole team is fighting to be the best. It’s strengthened without hurting the family vibe the squad strives for.

“We have girls who are sitting out and rotating in, so it makes it competitive,” she said. “Everyone is competing for their spot.”