‘They let nothing get in their way’: Volleyball team brings home Eastfield’s first women’s national title 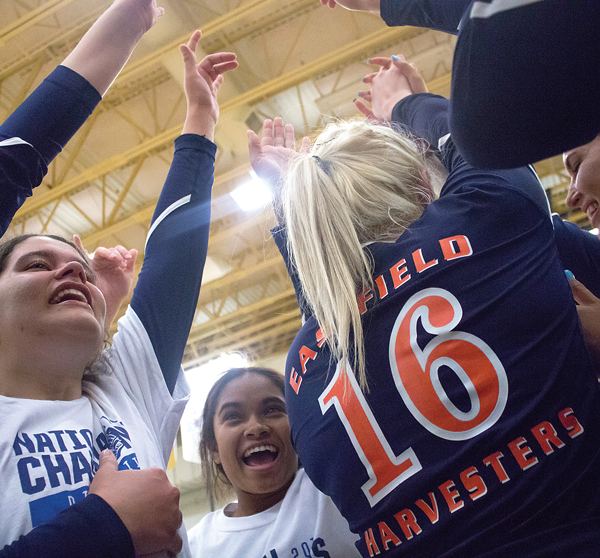 Eastfield led Harper in the fourth set; match point to the Harvesters. Outside hitter Kerstin Fredrickson dug the ball from a Harper serve to setter Kalli Caddell, who set it for outside hitter Keishla Reyes toward the left side of the court.

Reyes said she knew what was about to happen.

Reyes gave the ball a hard hit for the kill. It bounced off the hands of the blockers and out of play, giving the Harvesters their first ever national title. Following the kill, Reyes threw her arms in the air in triumph and joined the rest of the team. Tears poured down every face as everyone jumped, cheered and hugged one another. Middle blocker Payton Costlow said the victory meant everything to the team and they had their sights set higher after last year’s third-place finish.

“This year coming into it, we knew it was possible,” she said. “This was our goal all along, and actually achieving that goal is amazing and breathtaking. We knew we could go there. It was just a matter of doing it.”

The Eastfield volleyball team became the first women’s team in school history to claim a national championship. Four of the men’s teams have won titles: basketball in 1997 and baseball in 2001, 2006 and 2011.

Since the first national rankings came out in mid-August, Harper never dropped from the top spot while Eastfield started as No. 3. Over the course of the year, the Harvesters dropped to No. 4 before jumping to No. 2 in the last poll heading into the tournament. “Ever since the first poll came out, since Harper was at first, our entire goal was to beat Harper,” Caddell said.

Players said teamwork and a positive attitude were crucial to getting as far as they did. Reyes said they dealt with many problems throughout the season.

“We faced a lot of adversity, which I think helped us,” she said. “Certain team members giving us issues, people getting hurt and everything that happened truly prepared us for that last game.”

In the first set, Eastfield took an early lead. Harper kept the score close and finally took the lead 19-18, but the Harvesters reacted by winning six of eight points to take the set.

The second set saw both teams battle through the first half and neither team took more than a two-point advantage.

Harper broke the deadlock by scoring four straight and leading 18-14 and not giving up the lead to win it.

Eastfield responded in the third set by scoring four consecutive points and winning 10 of 15. Harper did close in on the Harvesters’ lead, trailing by one point on three occasions, but Costlow got three straight kills at the end to win the set for Eastfield.

The final set opened up with a long rally that ultimately went in Eastfield’s favor. They held on to the lead and never looked back, winning six of the last nine to close the match.

Coach Brandon Crisp said the feeling was “surreal” but said he finally feels relaxed after the season’s conclusion.

“They let nothing get in their way. They came in as No. 2 seed and took out the No. 1 seed,” he said. “Now that the season’s over with, I can finally take a breath and a sigh of relief that we got it done.”

Setter Naisjah Rivera said it’s a satisfying feeling that “other people at school know and congratulate us for it.”

Costlow said she appreciated how the school stood behind the team, with the Office of Student Engagement and Retention holding a watch party on the first day of the tournament Nov. 11 in the Pit.

“It’s just really cool knowing that the whole school supports us,” Costlow said. “Even students and how staff is letting it be known, hanging signs and buying shirts. It’s awesome.”

The team qualified for the national tournament after dominating their conference by winning all their regular season matches, and dropping just two sets in the Metro Athletic Conference tournament.

Once there, they swept an undefeated Jamestown (3-0) in the quarterfinals and Central Lakes (3-0) in the semifinals to advance to the final for the first time in team history.

The team finished the season with a 27-7 record, winning the final 19 matches of the season. In that time, they dropped only three of 60 sets played. They also lead the nation in points-per-set won with 16.7

“It was a goal that we had set in mind but I never pictured that we could actually do it,” Reyes said about winning the national title.

“Without [my teammates] I wouldn’t be the player that I am today,” Reyes said. “The fact that I got it, it’s a pretty cool feeling, that’s for sure.”

Caddell and Costlow were named into the All-Tournament Team. Caddell finished with 100 assists at nationals and had the fourth-highest tally in the nation with 968 assists. Costlow finished with 30 kills in the tournament and 232 for the season.

“Kalli did a great job running the offense, finding the hitters and keeping our offense running very well,” Crisp said. “I thought Payton was on fire because she did a good job hitting and was strong. I think all of our girls could have been on that team.”

Sophomores Alyssa Tomlin, Faith Faulkner, Fredrickson and Costlow end their careers at Eastfield with a third and first-place finish at the national tournament. Crisp said it’s difficult to lose such “phenomenal” players who were vital to the team’s success.

Middle blocker Alex McPherson said with the title, the team “leaves a legacy” for years to come. Costlow said the team’s success this year will contribute to success in the future.

“For us as a team to go all the way, it’s a big deal for recruits for the next coming years because they’re gonna know they have to live up to that now,” Costlow said.

Reyes recalled when she came off injured in the conference tournament semifinal Oct. 27, she felt the team’s unity.

“When I got hurt that game, I was crying and I just felt like a big failure to the team,” she said. “I felt like I disappointed them. But Payton, Kalli and Faith all came up to me, and told me ‘We’re going to get this one for you.’ Seeing them win without me was one of the biggest pleasures I got all season.”

Caddell and Costlow said the team’s first win was significant to everyone.

“I think it means so much more knowing that we come here just on passion.” Caddell said.

Costlow said that being a junior college athlete only demonstrates their commitment to the team and to the sport.

“We don’t get money [from scholarships] and we weren’t good enough to go DI at a university,” Costlow said. “We’re basically here because we love volleyball. It’s just awesome for that to be so powerful that we went all the way.”