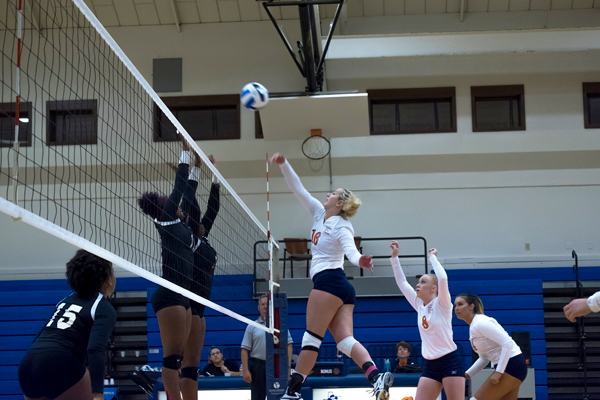 As an opposing serve arches over the net toward Kalli Caddell’s side, the freshman setter moves into position. The squeaking of shoes echoes throughout the Eastfield gym as the volleyball team practices against one another.

Caddell anxiously taps her fingers on her thighs, anticipating her teammates next move.

A teammate digs the ball and Caddell reads its flight before moving to set the ball for a hitter to attack to the other side. Caddell said her role as the team’s setter has her actively participating in the buildup of plays.

“I think I am one of the most important [players] because I do touch almost every single ball that’s on our side,” she said. “Without a setter, an offense can’t be run.”

Over the course of this season, she has distributed 644 assists to her teammates, nearly two-thirds of Eastfield’s entire team tally of 973.

The team is ranked No. 3 in the nation and continues its undefeated run in conference (7-0).

“It’s a big, important role for the team,” he said. “They run the offense and call the plays. Every time we get the ball, they will get contact. It’s up to them to try to isolate the blockers so they can get our hitters in the right spots.”

Caddell said she knows the importance of her position on the team, even though the average fan may not quite appreciate a setter’s responsibilities.

“We have great hitters and the passers just dig these great balls up, but sometimes the in-between thing is kind of unseen,” she said.

However, the Harvesters have reaped the benefits from Caddell’s play and Eastfield has continued their overall dominance.

In that time, she made 54 kills, with many assists coming from Caddell. She is second on the team with 244 kills this season.

Outside hitter Keishla Reyes, who leads the team in kills, 272, said Caddell plays in a smart and efficient manner on the court, heavily influencing the team’s entire game play.

“She thinks and she visualizes what she’s going to do and what should happen before she actually runs the play,” Reyes said.

Crisp said Caddell is a composed leader on the team, describing her as “calm” and “level-headed.”

“She’s a good, quality kid,” he said. “She works hard at everything she does, always seems focused and is responsible.”

Reyes described Caddell as an aggressive and hardworking player and a “mom” figure in the team.

“On and off the court, she takes care of us,” she said. “She’s the one that will get all, ‘you go hard or you go home.’ When we go to the weight room, she never skips sets or does too little. It’s a good thing to have a setter that never gives up. That’s what you want on the court.”