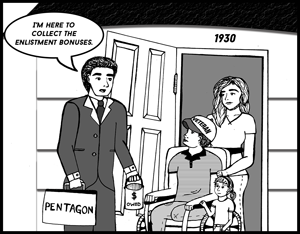 On Oct. 22, the Los Angeles Times reported that thousands of veterans of the California National Guard were being forced to pay back thousands of dollars of enlistment bonuses erroneously awarded by the Pentagon over the last decade, many with interest charges.

Following the rightful public outcry, Defense Secretary Ash Carter later announced the suspension of the collection effort, but the injustice is far from resolved.

As of this writing, no plan has been set in place for those who have already made payments. Some who refused to pay were threatened with wage garnishments and liens.

Others were having their military-funded tuition assistance put on hold, further threatening their livelihoods, and the resulting legal battles are only adding more tangles to the controversy.

The problem isn’t new. The California media has been reporting on this issue for years, and only now is it starting to gain some traction. Ten-year-old contracts are being unearthed by the Pentagon for collections, and after so many years of interest accrued, those affected are only finding it more difficult to pay back what they do not rightfully owe.

These brave men and women were promised a future made possible with funds from the federal government, and just because these bonuses were originally intended for soldiers taking high-demand assignments doesn’t make their service any less valid.

These bonuses were often used as incentives for recruitment. Taking their hard-earned money back from them once they’ve served is immoral and sets a poor precedent for potential recruits. And the fact that the Pentagon had the audacity to demand interest on their payments only makes it more sickening.

Our veterans should have never been punished for someone else’s incompetence. The majority were unaware that their bonuses were mismanaged, and the Pentagon has no right to take away the incentives used to recruit them in the first place.

All collection efforts against these soldiers have rightfully ceased. Those who have already paid should be reimbursed for their bonuses, interest and legal fees. The Pentagon and the California National Guard have every right to retract the bonuses for future recruits, but they must pay what has already been promised to others.

Our troops deserve to be given what they were promised, especially when so many are putting their lives on the line every day to defend our country. Poor management is no excuse for demanding that they give back what they risked their lives to earn.