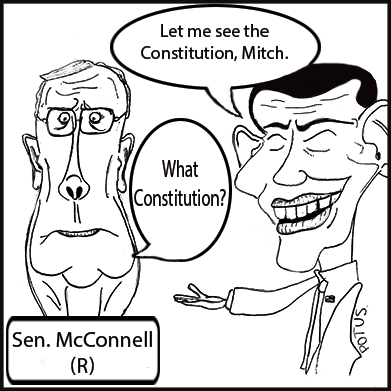 The sudden passing of Supreme Court Justice Antonin Scalia, who served as the conservative pillar of the Supreme Court for more than 30 years, has only widened the rift between the two sides of the American political spectrum. In a needless bid for power, the vocal right is up in arms about the Constitutional requirement that President Obama nominate Scalia’s successor.

Within hours of Scalia’s death, Senate Majority Leader Mitch McConnell said he should not be replaced until after the 2016 presidential election, senselessly fighting a nomination that has yet to be made.

While this is hardly the first time members of the Senate, right-leaning or otherwise, have threatened to block nominees, McConnell and his supporters’ refusal to even discuss it is especially egregious. In contrast, Chairman of the Senate Judiciary Committee Sen. Charles Grassley, R-Iowa, is open to a hearing despite also believing that President Obama’s successor should be the one to select a nominee.

McConnell claims that the American people should have a say in the nomination, but this goes against everything the Constitution has to say about the selection process. Article II, Section II states that the president “shall nominate, and by and with the advice and consent of the Senate, shall appoint ambassadors, other public ministers and consuls, judges of the Supreme Court.” The Senate, not the citizens, are responsible for the final vote.

The idealogical makeup of the Supreme Court means many cases could easily deadlock in 4-4 votes. Ties leave lower-court rulings in place. Landmark cases such as Fisher v. University of Texas at Austin, a challenge to affirmative action in college admissions, should not be decided by lower courts.

By refusing to cooperate, McConnell and those he represents are going against the Constitution they claim to uphold. They are within their rights to criticize a candidate once he or she has been selected, but the country cannot afford to have its Supreme Court tied up in a pointless power struggle.