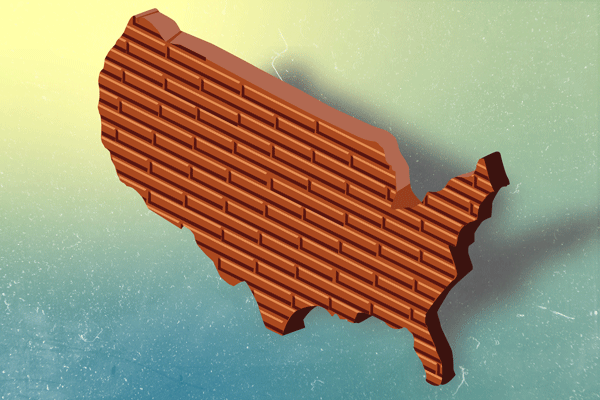 Members of the media and dominant political figures often push the narrative that President Donald Trump’s wall is a racist and unethical proposition, but that is far from the truth.

This anti-wall viewpoint is generally followed with arguments that are not grounded in facts or logic but rest entirely on emotional or unrealistic standpoints.

Nothing is wrong with emotions or feelings, but we must understand the necessity of realities to back up our claims.

The first of these arguments states that building a wall prevents people from immigrating to the United States in search of a better life, or as an escape from terror in their home country.

In short, others claim it holds people back from a more opportunistic and improved life.

However, anyone can apply for asylum in the United States just by approaching a port of entry and asking for the application.

Thus, a wall would actually help keep these immigrants safer, as they would not have to cross the border in dangerous areas where sex trafficking and drug smuggling is evident.

This application process for asylum, of course, has its own flaws and should be addressed and re-evaluated in the future. That being said, it still does not justify the illegal crossing of immigrants when there are alternatives.

Another argument many people claim is that the United States is not fulfilling some kind of moral obligation as a wealthy nation by keeping people out.

The reason why this argument is not valid is because it ignores the entire way in which the United States operates as a country.

America can only help immigrants and the rest of the world if it remains a stable nation. The best way to do that is to build a flourishing economy with workers who are educated and driven.

Accepting every single immigrant into the United States is simply not the best way to achieve and maintain this level of solidity.

Criminals, terrorists and other individuals with bad intentions would also be able to follow fleeing immigrants, as well as pose new threats to current Americans.

There are also concerns regarding the wall’s ability to deter crime and illegal immigrants.

However, walls have been built up in dozens of countries all over the world for these very reasons. There are barriers on the Iran-Pakistan border and the India-Bangladesh border, as well as plans to build a wall between Saudi Arabia and Yemen – and that is only naming a few of them.

This isn’t to claim that building a wall solves the problems in every instance. However, when the construction of a wall is combined with other deterrents and efficient programs, it can prove to be a       useful endeavor.

Another popular argument people try to say is that the calling for building a wall is a racist notion.

If that is so, then why does Mexico have a wall and fencing on its southern border with Guatemala? Because it wants to protect those in Mexico and monitor who enters the country — exactly like the United States.

Some people on both sides of the political aisle will attempt to make this a racial issue, claiming this misses the problem and diminish arguments that are based on concerns, not personal biases.

Merely having a wall doesn’t illustrate that the United States is racist toward Mexico  — the dominant race of Mexico is irrelevant to the fact that there is a large amount of crime funneling in from the border and illegal immigrants crossing it.

Though there are certainly some who do, I do not stand for building the wall because I have a hatred for immigration or people of a certain race. It’s just the opposite.

I couldn’t care less about their skin color or where they come from.

In fact, I love the idea of people wanting to come to America to help build a better future for their family and the nation. However, there is a reason they call this the American dream.

Many people fail to realize that the nation in which this dream can be a reality must be carefully fortified and guarded. It is only possible because of previous generations fighting for today’s freedom.

What would be different if the home countries of fleeing immigrants had built their own walls? What war, famine and cruelty might have been prevented? I stand for building the wall because I know that nations left unprotected, unprepared and unguarded are often left in shambles.

Our world has been in a constant cycle of great nations being built, invaded and torn down by others. Every country’s history is littered with this conflict. By building up our defenses, both physically and otherwise, we help ensure the longevity of the United States in a world that is continuously changing.

Building a wall does not just illustrate that America is its own nation with laws to be respected, but it shows the value in what we must protect. In other words, the wall is not just an anticipatory measure, but also a symbol of something bigger.

All of these common arguments have been used against President Trump’s wall since his campaign and election into office. The newest argument is regarding his claims of being able to declare a national emergency to build the rest of it.

Personally, while I do agree with building a wall, I do not think bypassing Congress is the best course of action in which to do so. By doing this, President Trump sets a precedent for future presidents to do things like this as well.

Regardless of people’s feelings on the president, we must be able to separate our personal feelings of him from those of the wall and examine them as two separate entities. We cannot allow personal, fleeting emotions to affect something as important and lasting as our national security.

Because if a wall is built on our southern border, I imagine it will be there long after President Trump has been in office, and long after personal moods have faded.

—Kaitlyn Moore is a political science major and a contributor