Since COVID-19 arrived, fans everywhere have endured months without watching their favorite teams. 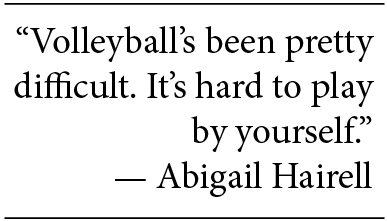 However, it hits even closer to home for the athletes involved. Not only are their seasons in jeopardy, but they have been unable to even leave their homes to practice and train. That isn’t stopping Eastfield’s volleyball and soccer players, though.

Rising sophomore volleyball player Abigail Hairell has been trying to stay in shape for the upcoming season from her parents’ home in Houston.

“Volleyball’s been pretty difficult,” she said. “It’s hard to play by yourself.”

Fortunately for Hairell, she has a sister in high school who also plays volleyball. Head coach Brandon Crisp sends players workouts to do at home. Hairell said she does them almost every day, often with her sister by her side.

The workouts consist of body weight exercises and ball drills to practice their passing and setting. Hairell has also been continuing to take classes. She had never taken online classes before, so it has been an adjustment. At first, it was hard trying to switch over to virtual learning and adapt, but eventually she got the hang of it.

“I’ve really started to like online classes,” Hairell said. “You get to do what you want, when you want. You get to do it more at your pace.”

She said she can’t wait to get back to campus and start playing again.

“The hardest thing is not being able to play volleyball in the gym,” she said. “I definitely miss it a lot.”

Crisp is in uncharted territory as well. He has been keeping in touch with the players through weekly video meetings. The meetings provide a chance for him to see how everyone is doing as well as help the group become closer with each other. His hope is to keep his players motivated and in shape to make sure they are prepared for whenever the fall season begins for Eastfield.

“They’re doing the best they can, but obviously playing volleyball is not the same playing by yourself,” Crisp said. “If you don’t have anyone to play with, you’re not playing normally. They’re definitely excited to get back.”

Eastfield soccer goalkeeper A’dc Williams said being stuck at home hasn’t been the worst thing in the world.

“I’m kind of an introverted person at heart, so being in self-quarantine is honestly like a dream come true for me,” Williams said, laughing. “But at the same time, as an athlete I don’t like being kept in the house … It limits where I can go, where I can work out, where I can run and stuff like that.”

She said it can be discouraging as a player to not be able to be in your element. Some parts of her daily routine are more difficult now in lockdown.

“I’m like my own self-motivator,” she said. “I have to keep myself going and doing everyday tasks that I would do on a daily basis. So things that I usually do are harder because I’m stuck in the house and sometimes you get kind of down.” 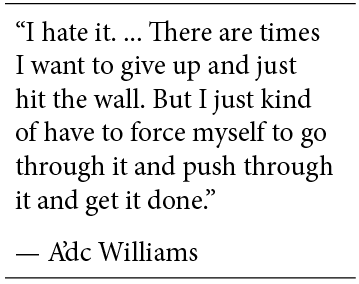 Williams also isn’t the biggest fan of the online transition, especially when it comes to her psychology and biology classes.

“I hate it,” she said. “I’m a hands-on learner … There are times I want to give up and just hit the wall. But I just kind of have to force myself to go through it and push through it and get it done.”

Williams said she has had to get creative with her workouts since the quarantine began. Usually she would work out at her apartment complex’s gym or even on campus, but those are no longer options.

Instead, she’ll go run around at a nearby park, do some stretches and make use of her weighted jump rope.

“I won’t say it’s easy, because it’s not,” Williams said. “The hardest part is just getting up and making yourself do it. Once you get it going, you’re like, ‘OK, I got this.’ Self-quarantine kind of makes it hard for you to do anything, so you have to make good of what you already have.”

Head soccer coach Paul Tate has been trying to do his part by keeping in touch with his players, calling and texting them every week, checking in on them and sending them workouts to do at home. His main priorities, though, are their classes and their home lives.

A lot of his players are working and trying to help out their families during these times. He understands that they have a lot on their plates, and he is just trying to support them in whatever they are going through as they wait to get back on the field.

“They’re all missing it; I can’t wait to have open gym during the summer,” Tate said. “I’m just hoping we’re allowed to get back to campus to actually do open gyms so all the girls can enjoy that, and we can see each other again and get to bond some more before we start preseason.”

As of now, it is not yet known when athletics will return to DCCCD and elsewhere nor how it will be done. Athletic director Anthony Fletcher said the NJCAA will announce their decision as to whether sports will return in the fall on June 19.

Athletes and fans alike can only sit and wait for an answer on when sports will be back to normal.

DCCCD announces most fall classes will be online