As a kid, I had my own Buzz and Woody toys with “SKYE” scribbled on the bottom of their feet. I would sit in front of the TV with my companions and watch “Toy Story” over and over.

My mom says that when the movie would end, I’d point to the blank screen, jump up and down and shout “Buh-Buh-Buh” (I couldn’t pronounce Buzz) repeatedly as the VHS rewound.

Two decades later I found myself with that same eagerness as the credits rolled for “Toy Story 4.”

From joyous tears of laughter to the tear-jerking ending, “Toy Story 4” is a movie with a message for the young, old and all of us in between.

Being the fourth installment of the franchise, it’s easy to doubt if the movie would hold up to the legacy left by the other three. But “Toy Story 4” does not disappoint, even though we never hear the three-eyed green aliens mantra “the clllaaaawwww.”

With scenes of Buzz and Woody playing with Andy and Woody retelling his first meeting with Buzz, this movie was made like “Avengers: Endgame” — with long-time fans in mind.

When we last left our pals, Andy had gone off to college and left them with Bonnie. Audiences saw the gang getting along swimmingly in their new home. 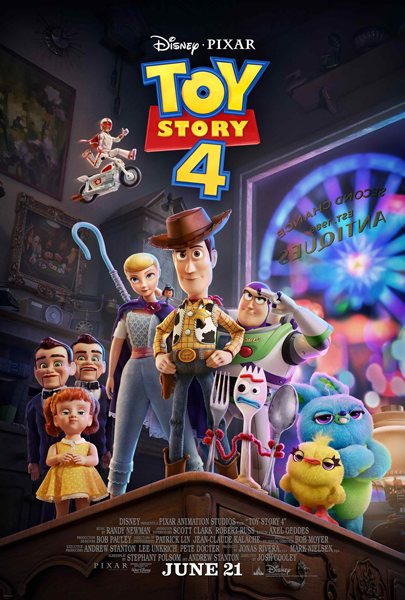 Toy Story 4 is the 21st feature film from Pixar Studios. Courtesy of Disney/Pixar

Except for Woody, who has been kept in the closet and treated as if he were on the island of misfit toys.

After attending her first day of kindergarten, Bonnie brings home a new friend she made from a plastic spork, Forky (Tony Hale).

Forky is not keen on the whole being conscious thing. He thinks of himself as trash and tries (hilariously) to get back to where he once belonged. And thanks to the outlandish comedy style of the “Arrested Development” star, the self-deprecating humor makes a bad situation hysterical.

Woody goes from wanting to push the new toy out of the window to jumping out of windows to save them. He even mentors the suicidal spork on the joys of being a toy, which allows Forky to dispel his negative self-image during their journey back to Bonnie.

“Toy Story 4” mirrors the plot of the 1995 classic in some ways, but rather than a brand new toy that glows in the dark with karate-chop action and helmet that goes swoosh, we have a toy with googly eyes, legs of a broken popsicle stick and arms made from a pipe cleaner. Nonetheless, he has Bonnie’s name written on the bottom of his feet and is loved as if he were the hottest item on the shelf.

We witness an evolution for our heroes – Woody stepping down from leader to mentor, Buzz discovering his consciousness and Bo Peep finding her independence.

New characters such as Ducky (Keegan-Michael Key) and Bunny (Jordan Peele) add a form of plush absurd comic relief, while Duke Caboom (Keanu Reeves) brings his own brand of humor as a narcissistic Canadian Evel Knievel. And the creepy antagonist Gabby Gabby (Christina Hendricks) and her minions of frightening ventriloquist puppets that resemble the doll from the 2007 movie “Dead Silence” are sure to cause some nightmares.

This is the finale this cherished saga deserves.

But as the movie ended and the little girl two seats down dressed as Jessie cried her eyes out, I didn’t say “aww,” I thought, “me too.”

In the end, I’ll just follow the advice of Buzz: “Listen to your inner voice.”

A seismic conclusion: Taking a look back before ‘Avengers: Endgame’