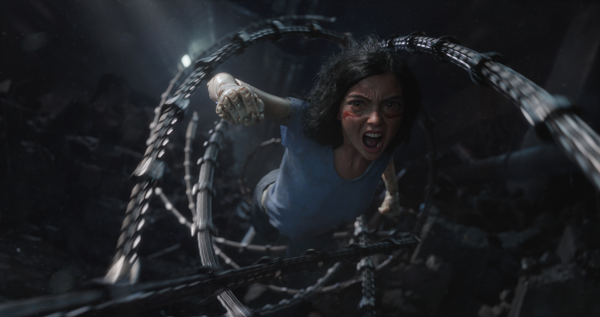 The new Robert Rodriguez and James Cameron collaboration movie “Alita: Battle Angel,” is a visual feast for the senses with a dull narrative.

The film is based on the manga series “Gunnm” by Yukito Kishiro and tells the tale of Alita, a cyborg girl in the 26th century who is awakened after 300 years with no recollection of who she is.

While the special effects make for a real visual treat, the rest of the movie is lackluster. With the same cliched sci-fi world, it makes for a movie that you feel you’ve already seen.

The story takes place in the dystopian cyberpunk world of Iron City, which is controlled by an upper echelon city that floats directly above called Zena.

After being discovered by Dr. Dyson Ido (Christopher Waltz), Alita (Rosa Salazar) is now faced with a world unbeknownst to her.

With help from the street-smart Hugo (Keean Johnson), Alita manages her way through the mucky world and takes a liking to the sport “motorball,” the only form of entertainment for the citizens.

Life is not all fun and games for Alita though.

Curious as to why Ido is out late at night, she finally sneaks out to see what secrets her father-figure creator is hiding.

She discovers that by night he is a “hunter-warrior” (a fancy term for bounty hunter).

Of course, things go awry and Alita jumps in to help fight.

During the action, Alita has a flashback to her previous life.

From here, Alita is determined to fight to find out not only who she is, but who she was.

The rest of the story is nothing new, nor is it thrilling, with action scenes that range from subpar to satisfactory. What draws you in to the movie though is Alita.

While she was the only character who was entirely animated, the state-of-the-art motion-capture technology used in the animation is so stupendous that you almost forget she is animated.

With the likes of Rodriguez and Cameron and a $200 million budget, you would think the writing could be better.

What the viewer is left with is a story that skips from one plot line to the next, with no real backstory developed on any of them.

The movie had some noteworthy actors, but nearly all their performances were subpar, knowing what they are capable of.

The only notable performance came from Rosa Salazar, who made her animated character feel more alive than the rest of the characters.

Christopher Waltz was by far the most disappointing of all the performances. If you are hoping to see a performance like that of “Django Unchained,” then I have some bad news for you.

Jennifer Connelly and Mahershala Ali were neither great nor terrible at their roles. They both just kind of said their lines but didn’t make you hate or love them.

All in all, “Alita: Battle Angel” can be described as “just OK.”

For a movie with incredible visual effects, it’s a shame that so much of the film was lacking any real depth when it was obvious that great lengths were made simply for the sake of animation.