Concert Review: Quiet Slang wants to ‘punch you in the heart’ 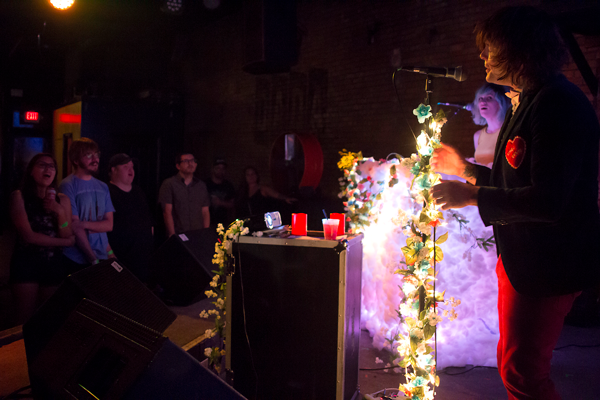 If you want something new to listen to, Quiet Slang blends punk with classical sounds to create a unique take on the angst-filled, emotional genre.

Touring for the first time as Quiet Slang, James Alex, frontman of Beach Slang, played at Club Dada on July 3. Quiet Slang performed their debut full-length album, “Everything Matters But No One Is Listening.”

After a rise in popularity from his solo NPR Tiny Desk Concert, Alex was inspired to go for a softer sound and created Quiet Slang. He was influenced by The Magnetic Fields’ Stephin Merritt and reworked 10 Beach Slang songs with a cello and a piano as the main instruments.

“That relationship between cello and piano, I’ve always thought, is incredibly lovely and haunting, like hopeful and despairing at the same time,” Alex said.

The first act, Abi Reimold, played some of her sweet-sounding tracks with her guitar and voice as the only instruments. Although Reimold is still new to the music industry, her short set entranced the crowd.

“I didn’t know any of her music but she was great,” music teacher Patrick Hutcherson, 25, said. 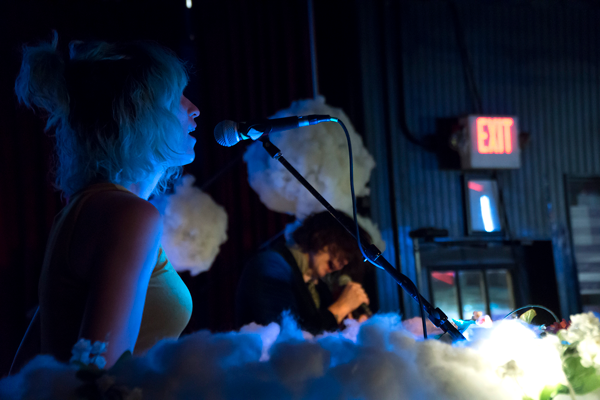 After a short break, Quiet Slang finally came out and revealed its dreamy decorated stage. The pianist Charlie Lowe, Quiet Slang’s other half, stood behind a piano lit up by small lights underneath the cotton and plastic flower arrangement.

“I dreamed it up and Charlie did most of the blue-collar work,” said Alex about their adorned stage.

There were other arrangements of fluff and flowers all around the stage, including Alex’s microphone and a TV projecting ballerinas dancing.

Between each tender song, Alex and Lowe connected with the crowd with their playful interactions. From Lowe’s story about her dress matching the curtains at their Portland show to Ozzy Osbourne and Dick Clark impressions, their small, diverse crowd laughed and cheered them on.

Tracks such as “Bad Art & Weirdo Ideas,” “Too Late To Die Young,” and “Dirty Cigarettes” lose some of their rebellious spirit along with the guitars and drums and are replaced with orchestrated strings and ghostly choirs.

Some loyal followers swayed and sang along to lyrics, such as “I’ve always felt stuck, alone, or ashamed” and “I write a lot, it’s mostly lies, I fall in love to pass the time.” The delicate orchestration brings light to Alex’s vocals and lyrics.

“I really dig the idea that things can always get better and work out,” Alex said of depressed yet hopeful lyrics. “I hope that theory is true, but even if it’s not true, that’s certainly the thing we’re trying to feed into people’s hearts, so they stick with it.”

After his set, Alex was still energetic enough to bring out his guitar and play some upbeat pieces, which really got the crowd excited.

Although Alex’s lyrics bring some heart-punching feelings and at times dreamy mood, the rest of the sound flatlines and turns out to be not as experimental as expected. This dreamy mood kept the loyal fans entertained, but perhaps to the average listener, it can become more of a snooze fest.

“It really gave off the ‘I’m going to my friend’s house to hear their band play,” but that band happens to be Beach Slang,” longtime fan Hutcherson said.