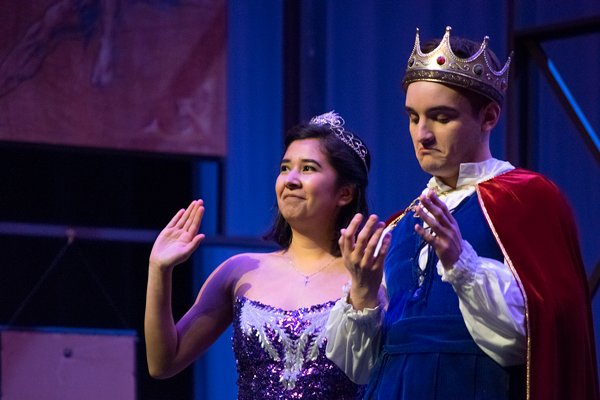 Maria Cabrera and Victor Deterra star in The Harvester Theatre Company’s performance of “Vanya and Sonya and Masha and Spike” on Feb. 22. Photo by Niels Winter/The Et Cetera

In the Harvester Theatre Company’s rendition of Christopher Durang’s “Vanya and Sonia and Masha and Spike,” playwrights Durang and Anton Chekhov seemed to be battling over whose melancholy was the superior melancholy.

The play was staged at Eastfield on Feb. 22 and 23. The company performed it again Feb. 28 for the Texas Community College Speech & Theatre Association’s one act play festival, bringing home 17 awards for the cast and crew.

Durang, who is known for his domestic satire and absurdism, won the Tony Award for Best Play, the Drama Desk Award for Outstanding Play and more when his “Vanya and Sonia and Masha and Spike” went to Broadway in 2013.

The play centers on the three children of now-deceased theater-loving professor parents who named them after characters from Chekhov’s plays. As it turns out, their names are not the only thing they’ve inherited from Chekhov’s lost souls.

Vanya and adopted sister Sonia live in their childhood home together after giving up a life of their own to care for their sick mother and father. Much like the same named characters in “Uncle Vanya,” they are hapless idlers who have never really lived.

Some of the lines sounded like they could’ve been taken straight from Chekhov while others, not so much.

The actors, rather than simply taking stimuli from each other, seemed to be taking deep and often isolating plunges into their characters’ neuroses in the first couple of scenes, setting a mood that was a lot more Chekhov than Durang. This made for an awkward transition when switching from the contemplative and modernist Chekhov back to the comedic Durang.

The actors eventually relaxed a bit and were able to embrace the farcical aspects of Durang’s comedy along with his fine line between humor and tragedy.

Their bickering, desperate loneliness and psychotic depression flowed naturally along with the many zingers of the show.

“Are you dreaming?” Vanya asks. “In documentary form?”

The real fun begins, with a quietly poignant footing of course, when Masha, the famous actress, arrives threatening to sell the family home. Despite being named after Chekhov’s “Three Sisters,” Masha’s character is a spin-off of Arkadina from the “The Seagull.”

Unlike her other two siblings, she’s actually had a life.

As an actress, she gets to gallivant around the world, spurning feelings of resentment and unresolved grievances in her siblings.

The worth of her life, however, is open to interpretation.

You don’t need to be familiar with the works of Chekhov to understand the play, but having some familiarity with the Slavic scribe certainly adds depth to the comedy and makes it all the more enjoyable.

The play is a sunny story laced with heartwarming sentiments that not only lighten Chekhov’s despair with a calming sense of acceptance like that of an anti-depressant, but compared to Durang’s previous works, seems to lighten his own satirical despair as well.

Of course, it’s true what Sonia says in the beginning of the play: “If everyone took antidepressants, Chekhov would have had nothing to write about.”