‘In the Next Room’ creates comedy out of sexual taboo

“In the Next Room” by Sarah Ruhl is set in the late 1800s, around the time electricity was introduced into homes for personal use. The story revolves around Dr. Givings, portrayed by Vinnie Serionel, an inventor who uses electricity-powered vibrators to treat hysteria. 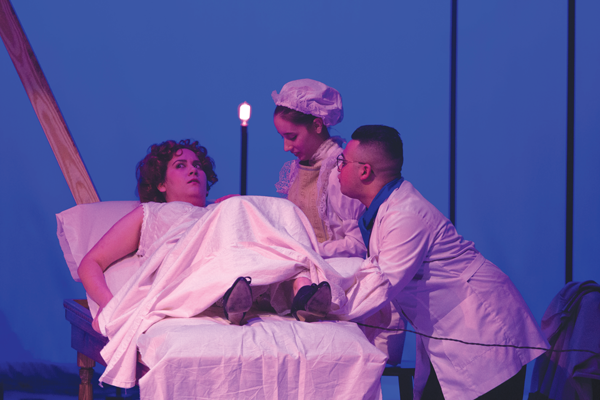 Dr. Givings hides this method of treatment from his wife, Mrs. Givings, portrayed by Monica Lira, because he feels it is necessary to keep their relationship healthy. Dr. Givings works on patients all day, leaving Mrs. Givings to tend to their baby by herself.

As more regulars come in for treatment, Mrs. Givings begins to befriend them and ask exactly how her husband does his treatments. Not long after, the secret gets out, and Mrs. Givings becomes increasingly frustrated with her husband. The more the sub-plots being to evolve, the more intricate details the characters reveal about themselves. Most characters had a facade in place, leading the audience to believe they are someone entirely different until they all meet their resolution, whether pleasant or not.

The costume design was incredible, paying close attention to detail.

The more characters that get introduced into the office of Dr. Givings, the more tense the main couple’s relationship becomes. Back then, female orgasms were not well known. They were referred to as a “paroxysm,” or violent expressions of emotions.

For example, the first patient the audience meets is Sabrina Daldry, portrayed by Albamar Seguinot, who is accompanied by her husband. After a few treatments, she reveals that she comes back because she doesn’t get that kind of excitement from her husband. She enjoys the treatments the most when Dr. Givings’ female assistant Annie, portrayed by Giavanna Ramos, takes part. 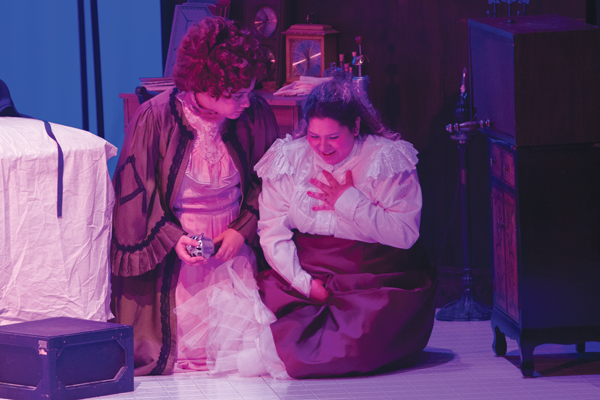 The actors did an amazing job at conveying their characters. Whether it was their tone when addressing one another or their body language when listening in on hidden conversations, you could easily read their intent.

I left with an idea of what each character wanted out of their experience, but after some critical review of a few smaller interactions, I pieced together a lot of information that only made me appreciate the show’s message that much more.

The show did get rather awkward at times, especially when you hear nothing but women moaning on-stage. Thankfully, most of the awkwardness was broken up by refreshingly funny lines.

These comic relief moments really help make the show enjoyable and break up the subject matter. There is a lot of story to uncover once you look past the show’s face value.

The Harvester Theatre Company will be performing an encore presentation of the award-winning show at 11:15 a.m. March 8 in the Performance Hall.