Michael Keaton stars as Ray Kroc, known as the founder of McDonald’s. Courtesy of The Weinstein Company.

If you’re looking for the backstory to McDonalds through the eyes of the man that made it all happen, I would highly recommend “The Founder.”

Easy to follow writing and a great story make this movie one of my favorite releases of the year.

Despite a few successful inventions here and there, Kroc seems to hit a dead end; that is until he receives an order for some milkshake machines to a food stand named McDonalds.

The owners are brothers Dick and Mac McDonald, played by Nick Offerman and John Carol Lynch.

They show him the whole operation, which leads Kroc to want to be a part of it.

After convincing the brothers to let him have part ownership, he goes behind their backs to build McDonald’s all around America. He even steals Dick’s idea of “The Golden Arches.”

From then on, Kroc defies every wish the brothers have, eventually stealing the company from them entirely and brandishing the McDonald’s name for himself.

The brothers are left with nothing while Kroc rose to the top of the entire food industry.

The movie was very well put together. It told a very coherent story that was easy to follow and it didn’t seem too slow or dull.

The writing is very straightforward but has some funny moments to lighten the mood.

An issue with the movie is that it seems to have a lot of filler scenes, or scenes that don’t really serve a purpose other than acting as a small transition.

For example, there are a few shots that just show Kroc walking down a hall or show one of the McDonald’s kitchens while the workers prepare food. 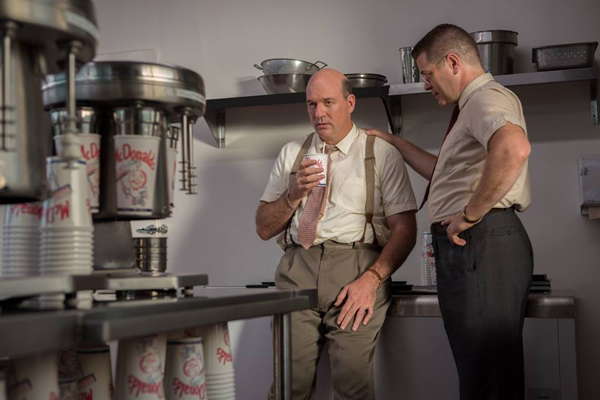 John Carroll Lynch and Nick Offerman play Mac and Dick McDonald in “The Founder.” Courtesy of The Weinstein Company

They have no real relevance, but don’t disrupt the flow of the movie enough to be a major burden.

After the brothers were left with nothing but their original stand, the movie cuts to facts about McDonald’s and the real people the characters portrayed.

Because of this, the movie seems to end in a really weird spot with no real ending scene.

On the upside, this gives great insight to the franchise we all know and love.

It is historically accurate and provides information on what happened to all the characters at the end of the movie, leaving you with a strong understanding of the history behind the McDonald’s name and the people who made it all happen.

The storytelling of the movie is phenomenal.

It makes you go from loving to hating Kroc in a matter of seconds, all while building the characters around him.

You are never really left wondering why characters made certain decisions because the dialogue makes characters intentions very clear.

Overall, the movie leaves you with the full story of McDonald’s history told through an interesting Hollywood perspective.

It would be awesome to see Hollywood educate the masses on other subjects we may not have known.

Whether you hate McDonald’s or not, this movie is worth checking out.