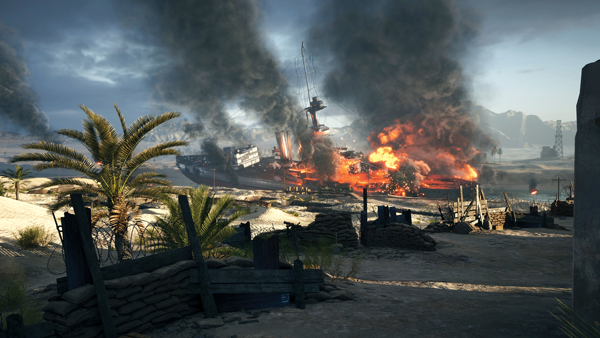 There’s something inherently hypocritical about a developer trying to paint their game with a “war is hell” message while still setting aside room for a spirited multiplayer death match somewhere in the code.

Civilians are being slaughtered, entire countries are toppling and men barely out of high school are being left to rot out in No Man’s Land, but we can’t deprive our players of their kill streaks and leaderboards.

Did you know that the Battle of Arras was actually just a game of capture the flag where the two teams spent the entire ordeal rhythmically crouching over each other’s corpses and shrieking about how much they enjoyed the night with my mother?

It’s a trap a lot of war-based action games fall into, and while it certainly isn’t exclusive to the first-person shooter genre, it’s gotten so prevalent these days that I feel like I need to be donning a neck brace before the jump from single-player to multiplayer gives me whiplash.

“Battlefield 1,” the latest to follow the trend of slapping a “1” onto a game’s sequel for no other discernible reason than to confuse and anger relatives during their dreaded Christmas GameStop visit, at least makes an impressive effort to distance itself from these types of shooters.

“Behind every gunsight is a human being,” the opening cinematic boasts, and it starts off strong by throwing the player directly into the line of fire in the final days of World War I.

Amidst the smoking ruins of what was once an idyllic French hamlet, the Harlem Hellfighters struggle to hold off the German offensive. One by one, the Hellfighters are picked off, and the player experiences every death through the eyes of each doomed soldier in a prologue where losing simply means moving on to the next controllable survivor.

In the end, an artillery barrage leaves only two men alive on the battlefield — one American, one German. The two raise their guns, ready to become the last man standing, then freeze. They’re cold. They’re hurting. They’re surrounded by smoldering corpses. Crying silently, they both lower their weapons. The futility of the war weighs down on them until they both crumple with exhaustion, and the proper first level begins.

It’s an incredibly powerful sequence, one that could have easily been hackneyed or forced, and it effortlessly sets the tone for one of the best shooters I’ve played in years.

Which makes it a little disappointing that it steadily undermines its own core message — that no matter the color of the uniform, there is a life behind that gun — after the opening level.

Don’t get me wrong, “Battlefield 1” is easily one of my favorite games to come out this year. The gameplay, while not exactly original, feels very organic and mixes things up between levels in a way that doesn’t feel gimmicky or distracting. A minimal HUD keeps the player nicely immersed, and the levels are as varied as they are visually stunning.

But I have to wonder how this game can include a line like “The war is the world and the world is the war” only to ignore an entire half of the war by focusing exclusively on the Allied Powers. That’s not say I’m against playing as yet another wise-cracking American or uptight Englishman, especially since this game goes out of its way to make its characters likeable and interesting before the war inevitably crushes them. But how can the game expect me to learn to humanize the enemy when all the Central Powers are eventually reduced to hordes of faceless mooks conveniently hidden behind hoods and gas masks for fear we mistake them for anything other than virtual cannon fodder?

That single German soldier from the prologue expressed more depth and emotion than all of the other Germans in the game combined, and he didn’t have a single line of dialogue. I would have loved to have been able to play as a soldier from Austria-Hungary or the Ottoman Empire to keep things a little more rounded, especially since the six playable characters we do have barely round out to 10 hours of gameplay total. I can’t believe I’m writing this, but this is a game in desperate need of some DLC levels.

It also doesn’t help that despite the overall high-quality writing, there are still a few sections that try just a little too hard to tug at the heartstrings.

I believe the developers wanted me to have some kind of reaction when they decided I needed to play as a messenger pigeon flying in slow motion through a series of horrific explosions, all juxtaposed with some heartfelt piano music, and “bewildered giggling” probably wasn’t one of them. The fact that the poor bird immediately flew out of bounds and died because I didn’t realize it was an interactive scene my first time through didn’t help.

But at the end of the day, “Battlefield 1” sets out to make The War to End All Wars more than just another bullet point in our history textbooks, and it does it very well. Its strength lies in its writing, give or take a few oversights, and the gameplay is more than solid enough to support it. Consider this one of the biggest pleasant surprises of the year.