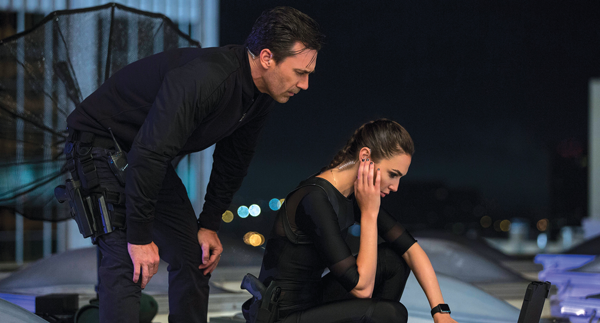 “Keeping Up With The Joneses” doesn’t start out like any other comedy involving spies, but a house exploding in the first scene might give that away.

Director Greg Mottola fabricates an uplifting comedy with hilariously awkward moments and action scenes that leave the viewers on the edge of their seats.

Zach Galifianakis plays Jeff Gaffney, a human resources worker for a tech company called MBI. Along with his wife (Isla Fisher) and two sons, he lives a comfortable life in their stereotypical gated community cul-de-sac.

So stereotypical in fact, that it’s almost satirical and humorous, much like Galifianakis’ performance in nearly every movie he’s starred in.

[READ MORE: ‘Upside Down’ takes Set It Off in new musical direction]

It takes some time to warm up to him though, since the role of a suburban, law-abiding citizen isn’t one Galifianakis would normally take on.

When the story becomes so unbelievable that it’s humorous, he settles into his more familiar role as a wild card in an upstanding performance.

Gaffney’s life gets off track after new neighbors Tim and Natalie Jones (Jon Hamm and Gal Gadot) move into his seemingly utopian neighborhood. They appear to be a perfect fit.

Tim is a traveling writer and has obscure and fascinating hobbies, and Natalie is Greek and does charity work for orphans. Essentially, the perfect cover-ups for international spies.

The plot unfolds after the Gaffneys discover their new neighbors’ exciting lives as secret agents.

The movie takes a different approach to humor, incorporating the elements of any other action movie and taking the moviegoer on an emotional roller coaster that may leave them with a new favorite comedy.

The chemistry among the characters made their unlikely friendships seem organic, and the production team definitely had an eye for cast members, especially since Gadot actually served in the Israeli Army for two years before becoming a model.

It takes a satirical twist to what would’ve been essentially just another action movie, and I wouldn’t be surprised if it rakes in millions at the box office.