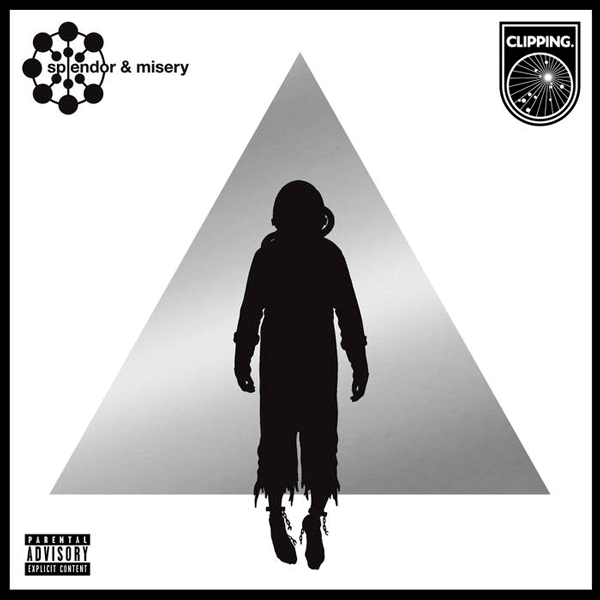 When you think of experimental music, you may think it has to be weird, inaccessible or unpleasant. But experimental hip-hop trio clipping shows that innovation in music can be enjoyable and accessible.

Clipping. has mostly been categorized as “noise rap,” a genre which is pretty self-explanatory, and clipping. provides a refreshing take on hip-hop through the label.

This concept album tells the story of an intergalactic runaway slave and his journey through the unknown universe.

The sci-fi hip-hop concept album idea is reminiscent of Deltron 3030’s self-titled record, but where that focused on a larger futuristic society, “Splendor and Misery” focuses on the specific subject of slavery and a man’s journey.

Being a concept album, it makes sense that the lyrics are one of the most important parts. They tell the story from two perspectives: the runaway slave protagonist and the narrating AI of the ship he’s commandeered. The ship AI refers to the main character in the third person and has a notice monotone tone. The protagonist raps about himself and his own experience.

The instrumentals also play a part in the storytelling. In “The Breach,” they represent the action when the protagonist takes control of the slave ship. In “Break the Glass,” the instrumentals mimic the sounds of the spaceship.

The instrumentals also mirror the emotions of the protagonist. Dissonant and erratic, the music shows that his mental state is uneasy, to say the least.

The future that clipping. paints draws parallels with the history of slavery in America. The album makes use of slave hymns and connects them to modern freestyling.  In “All Black,” the narrator suggests that he raps all day to himself until his throat is sore. All the protagonist has is his freestyling to pass the time.

There are two freestyles on the album that serve as interludes. In the first freestyle, just after the protagonist takes control of the ship, he uses basic diction and wordplay.

After drifting in space for what we can assume is a long time, the second freestyle comes up. This time, the protagonist has had ages to practice his hobby. He has a much larger vocabulary and gives more thought to his raps.

In the story we’re told, he never finds a new home, continuing to drift through space. The album suggests that the price of his freedom is loneliness.

The album does start to drag after “Air ‘Em Out.” This might be intentional to parallel the meandering of the protagonist who goes nowhere. Even when the album does drag with tracks that don’t advance the story, the songs are still enjoyable.

I recommend listening to “Splendor and Misery” while reading along with the lyrics. There is much more to be dissected from this ambitious album than it initially appears. All of the noise and sounds in this album are constructed masterfully and arranged perfectly.

There aren’t many noise rap groups out there. More specifically, there aren’t many groups that come near the sound or expertise of clipping. But perhaps they can pave the way for more innovation to come.

While so many artists seem eager hop on musical trends, clipping. continues to produce original ideas. clipping. are a breath of fresh air in a genre that so greatly needs it.