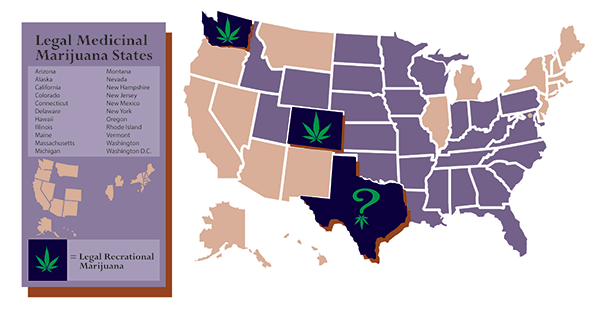 No prescription is necessary. A potential consumer just needs an I.D. that says he or she is over age 21.

Washington is set to follow Colorado’s lead in June.

Oregon, Arizona and even the nation’s capital could join them if marijuana legalization legislation is pushed through this year.

So could Texas, a historically red state for the past 50 years, go green too?

John Hunter of San Antonio, attorney for the National Organization for the Reform of Marijuana Laws, is not optimistic.

“Texas was the first state to outlaw marijuana,” he said. “It’ll probably be the last state to legalize it.”

Sensationalized reports in newspapers such as the El Paso Herald fueled a perception that weed drove its users to psychotic episodes of violence. This eventually led El Paso to pass a city ordinance in 1915 that placed marijuana in the same category as cocaine.

Fast forward nearly a century and Gov. Rick Perry has openly said that he favors decriminalizing marijuana. Perry prefers alternate rehab programs and drug courts to keep Texans out of prison, but Hunter said this is not enough.

“A lot of people are not truly addicted to marijuana,” he said. “A lot of people are recreational users, or if they are habitual users, then they have a medical reason for doing so. So courts that put more probation-like community supervision conditions on them just exacerbate the problem.”

Hunter believes there needs to be less law enforcement and less involvement of the justice system in order to decrease the amount of tax revenue and law enforcement dollars being spent on marijuana.

History professor Matt Hinckley sees lobbying by the prison industry as a potential hurdle in the legalization of marijuana.

Hunter said the probation industry also generates a lot of money for the state. He refers to marijuana as a “cash cow” since most prosecutions require some probationary sentence.

“Probation requires people to pay money to have a urine test done on them with relative frequency,” Hunter said. “It’s going to require them to go to classes. They have to pay for those classes. It’s going to require them to pay fines and court costs. So each marijuana conviction generates a nice little chunk of revenue. And if you’re dealing with a large quantity of marijuana … the cash is seized. To some extent, there’s a lot of profit to be made from prosecuting people with marijuana, and it will take a little while to change the culture in law enforcement about that.”

Hunter believes law enforcement would likely oppose marijuana legalization in Texas because it would decrease officers’ ability to arrest people for other offenses. He said the pungent smell of marijuana is used often as probable cause to search someone’s car. From there, an officer can find guns, harder drugs and other contraband.

“It’s a very powerful tool for law enforcement,” Hunter said. “And they’re not going to want to give that up.”

“I would imagine if Texas was going to head down this road, it would be wise to include law enforcement,” Nassau said. “Even though they’re part of the government, it should almost be looked at as a separate entity or arm of the government because they’re the ones making the arrests, so they need to be in on the process.” One question, Nassau often asks reporters and the audience during newspaper and television interviews is, “Would you rather be building schools or would you rather be building prisons?” Of the $100 million in tax revenue Colorado is on track to make from recreational marijuana sales, $40 million will be set aside the public education system.

Colorado has a 25 percent state tax on marijuana and an additional 2.9 percent sales tax. Hinckley wishes Texas would legalize marijuana soon so the state can put the additional marijuana revenue to use.

“If it were done right, it could result in increased tax revenue which could support any number of different programs in this state — from public education to higher education to Medicaid to treatment programs for harder drugs, those who are addicted to heroin or meth,” he said.

History professor Mike Noble doesn’t believe the economic benefits will appeal to Texas enough to overcome the state’s conservative values. However, he believes geography could play a role in moving Texas to legalize marijuana.

“[In] a few years, the drug war on the border might convince people legalization is a better route,” Noble said. “You’ve got to remember that the whole reason why [the cartel is] in business and the whole reason why they’re so powerful is because they have consumers. And guess where the consumers are? They’re north of the Rio Grande. … If we want to stop the drug war, it’s very simple. Quit buying the stuff. Cartels are out of business. That’s why if [we] legalize it, [we’re] now in competition with the cartels, and the cartels can’t be in competition with the government. They’ll lose.”

No matter what logic or campaign is used, Hunter believes marijuana will still require a wider level of acceptance before it is legalized in Texas.

“If we can get the soccer moms on board to the idea that if we put reasonable regulations on this like we have with alcohol and tobacco, then your fears about your 16-year-old child smoking pot in his room are going to be covered,” he said. “We’re going to try our best to protect our young people, but that doesn’t mean you have to impose your fears about your 16-year old son on every consenting adult in the state of Texas.”