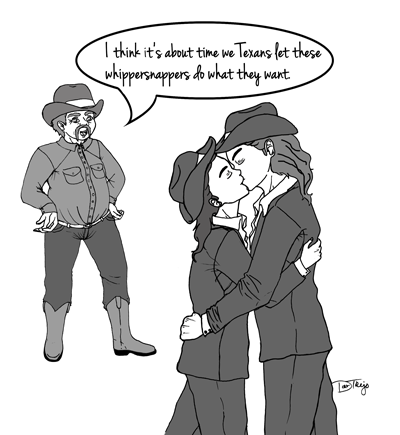 On Oct. 6, the Supreme Court made the surprising decision to refuse to hear appeals related to federal same-sex marriage laws in five states: Indiana, Oklahoma, Utah, Virginia and Wisconsin.

This move makes a bold statement to the rest of the United States, essentially delivering the message that it is time to uphold the framework of the Constitution regarding the long-standing dispute of marriage rights.

It is a discussion that directly involves legality, morality, religion and culture. Is marriage strictly between a heterosexual man and woman, or is marriage a platform open to all Americans regardless of their sexuality?

If government has no place in the sanctity of marriage, then why is marriage between two people of the same sex banned?

The fact remains that homosexuality is just as real as heterosexuality. If we are a nation for all people and endorse the ideas of love and family, why is the line drawn at marriage? America steeps itself in the idea that all people are created equal, and this should extend to same-sex couples.

Since the beginning of 2014, 16 states have legalized same-sex marriage. Thirteen of those chose to legalize it after the Supreme Court refused the five states’ appeals.

With 33 states committing themselves to marriage equality and ending legal discrimination against same-sex couples, it is time for Texas to follow in their footsteps.

Yes, this is a historically conservative state. But its people value individualism, freedom and equality.

So why not extend those values to same-sex couples?

Furthering the quest for marriage equality in America will signify strength, compassion and the devotion to preserving the true tradition of marriage: love.