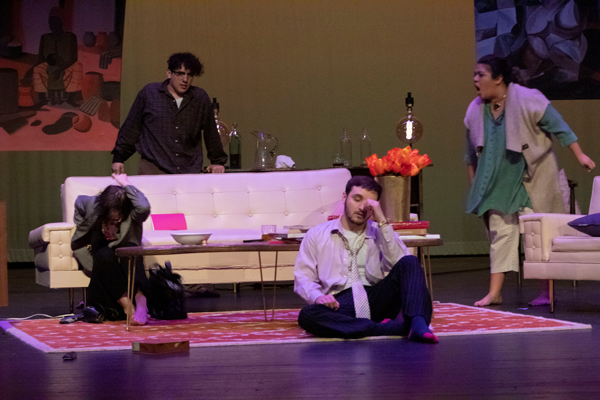 The cast of “God of Carnage” perform at opening night in the Performance Hall on March 4. Photo by Baylie Tucker/The Et Cetera

Slurred profanities will be screamed from vomit-stained lips in the Harvester Theatre Company’s production of “God of Carnage” by Yazmina Reza.

Premiering March 4,  four pernicious characters will wreak havoc on each other and themselves as they tackle controversial issues such as misogyny, racial prejudice and homophobia.

“Come see the stage just degrade in front of your eyes,” said technical theater coordinator and director of this production, Lori Honeycutt. “The show is about toxicity and degradation. Masks off.”

Students are invited to sit in on a conversation between two sets of parents as they discuss a violent incident that occurred between their children prior to the start of the play. 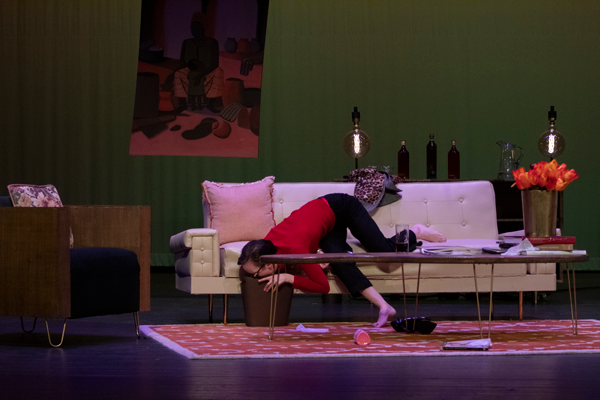 Annette Raleigh, played by Bailey Wyer, throws up in “God of Carnage” before the play begins because she started feeling sick after an argument with her husband. Photo by Baylie Tucker/The Et Cetera

Some characters want a resolution, and others simply could care less. As the night progresses copious amounts of booze are added to the mix. They fight, break things and even vomit on stage as their true natures come to the foreground.

Honeycutt believes the dialogue in “God of Carnage” can shed light on the masks we all wear and how different we can be once that mask is taken off.

“This is how people talk every day,” she said. “When you’re a person of color, when you’re LGBTQ, this is coming at those people all the time. Whenever you hear it on stage, it helps those of us that want to be allies go, ‘woah!’”

As the characters verbally and physically abuse each other it becomes clear they’re really just abusing themselves with each hateful comment that chips away a piece of their social front. Each one walks on stage with a false personality only to watch as booze and frustration slowly wash away their facades and reveal their true inner selves. Honeycutt hopes this play will inspire people to speak out in the face of injustice.

She said people won’t say certain things in polite society, but that doesn’t mean they aren’t thinking about them. She said that she’s even seen this brand of backhanded bigotry here on campus.

“I have heard people [at Eastfield] say to my husband that he’s well-spoken for a black man,” Honeycutt said. “And they don’t think there’s anything wrong with that. They think it’s a compliment. I hear that stuff all the time.”

In this story, brutal simplicity brings the characters to the edge of their breaking points and exposes their individual prejudices. As the conversation progresses and the alcohol starts to take hold, they each start to act more and more like children themselves.

“Inside, we are all just children,” Joe Martinez, who plays Michael, said. “Trying to figure out who we are and what we’re supposed to be doing. Sometimes we act childish. Sometimes we act worse than our children.” 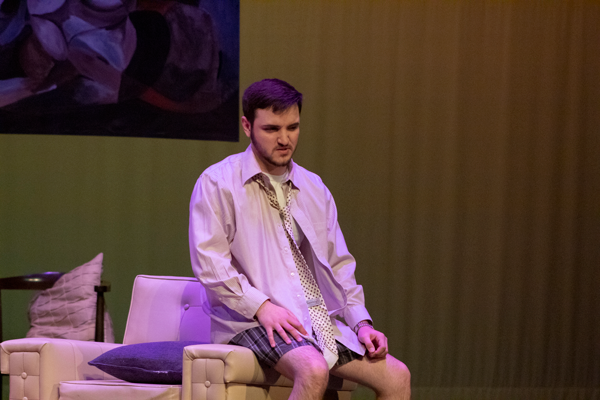 Alan Raleigh, played by Victor DeTerra, sits on a chair after Annette threw up on him, causing him to take off his pants. Photo by Baylie Tucker/The Et Cetera

Victor DeTerra, who plays Alan, said he had a hard time relating with his character and developing Alan’s apathetic qualities. DeTerra said he’s happy about this because it could be dangerous to identify too much with these toxic characters.

“Look at maybe how we have our own masks in our lives,” he said. “This display may enlighten that and make [people] aware of either their masks or the masks of others around them. It’s an interesting concept.”

Oliver Wyer, who plays Annette, also believes that the central theme of this production is the character development that takes place as their social fronts fade away.

“You don’t know somebody until you’ve seen past their mask. … In the end [our characters] become complete opposites of what you see in the beginning.”

However, she’s got a much more grotesque moment in the play to worry about. The vomit scene. Arguably the most iconic part of this production is when Wyer’s character expels all over the stage and even on some of the other cast members.

The biggest issue is how to actually make the scene work. In the original play Annette is outfitted with a pump of sorts that feeds though her clothes and allows for the illusion of spontaneous spew. For this production the cast has what they call “Kevin.”

Kevin is a massive whoopee cushion housed within a couch pillow. Pop the whoopee cushion flap through one edge of the pillow, fill it with water and chunks of oatmeal, then squeeze the pillow until the desired result is achieved.

However, Kevin has been anything but cooperative. Wyer said they’ve had rehearsals when almost all of their time was spent trying to get the synthetic regurgitator to function properly.

“It’s kind of nerve-wracking,” she said. “If it doesn’t go a certain way, people will see that it’s messed up.”

Honeycutt also mentioned another issue they’ve been dealing with in rehearsals. She can’t get her cast to stop burping on stage. Throughout the play, the characters are drinking constantly. The actors don’t use real alcohol, but the resulting mixture of food coloring and water, sweet tea or watered down apple juice has made for a plethora of bountiful belches and a sticky mess on stage.

The cast of “God of Carnage” eat peaches and apples in the beginning of the play. Photo by Baylie Tucker/The Et Cetera

Annette Raleigh, played by Bailey Wyer, throws up before they start drinking after an argument with her husband. Photo by Baylie Tucker/The Et Cetera

Annette Raleigh drinks rum on the couch after puking in the trash can. Photos by Baylie Tucker/The Et Cetera

Alan Raleigh, played by Victor DeTerra, sits on a chair after Annette threw up on him, causing him to take off his pants. Photo by Baylie Tucker/The Et Cetera

Alan Raleigh listens to Veronica Novak talk about a fight their kids got into. Photo by Baylie Tucker/The Et Cetera

Michael Novak gets mad at his wife for siding against him. Photo by Baylie Tucker/The Et Cetera

Veronica throws Annettes belongings at her in an attempt to get Annette to leave. Photo by Baylie Tucker/The Et Cetera