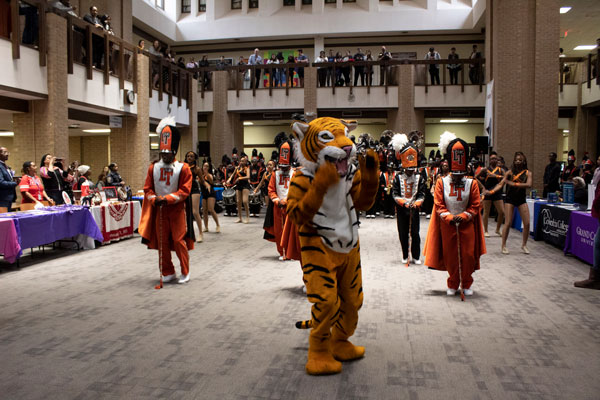 The Lancaster High School marching band performs for students in the Hive at the HBCU transfer fair on Feb. 4. Photo by Baylie Tucker/The Et Cetera

When it came time for Larissa Pierce to choose a college, she faced a dilemma. Her first choice, Colorado State University, required a large down payment in order to hold a dorm room, and Pierce did not have that kind of money.

Even though Pierce is African American, she had not seriously considered attending Grambling State University, a historically black university in her home state of Louisiana. When her best friend suggested she apply to Grambling, Pierce agreed, but only because there was no required down payment. She still hoped to go to CSU by her second semester.

Director of completion and transfer, Timothy McDuffie gives a shout out to his fraternity from during the HBCU transfer fair on Feb. 4. Photo by Baylie Tucker/The Et Cetera

Once at Grambling, she felt comfortable. Several of her high school classmates were there, and Pierce liked the rural setting. After graduating with a bachelor’s degree in English education, Pierce went back to get her master’s degree in literature.

Pierce, an English professor at Eastfield, said Grambling’s teacher education program prepared her to work in the classroom.

“I cannot deny my experience at Grambling,” she said. “I can’t tell you what it would have been like at Colorado State, but … it was just happenstance that things didn’t work out monetarily but yet they worked out here [Grambling].”

Eastfield kicked off its celebration of Black History Month on Feb. 4 with a Historically Black College and University Transfer Fair. Representatives from eight HBCUs, including Texas Southern University and Jarvis Christian College, set up information tables around the perimeter of the Hive. Eastfield faculty and staff who attended HBCUs sported the colors of their fraternities or sororities. Music from the Lancaster High School marching band sent a jolt of energy through the onlookers.

“We tried to re-create the element of what it’s like to be on an HBCU campus in the quad…,” said Timothy McDuffie, Eastfield’s director of completion and transfer. “It’s just a feeling, it’s just an energy that sometimes you don’t get at other institutions.”McDuffie, a graduate of Norfolk State University in Virginia, said he chose an HBCU to feel more connected to his culture.

“It helped me to build community,” he said. “It also helped me get prepared for the workplace and what that looks like through the lens of an African American male … and what are some of those biases that you are going to need to navigate through to be successful in your career. I don’t know if I would have gotten that training had I went to another school.”

The first HBCU, now known as Cheyney University of Pennsylvania, opened its doors in 1837.

Other African American institutions of higher learning such as Howard, Morehouse and Tuskegee followed soon after. HBCUs were the only option for education that most African Americans had until the end of segregation in the 1960s, and continue to play an important role in the 21st century.

According to statistics compiled by the Black Student Achievement Program, HBCUs make up less than 3 percent of all institutions of higher learning in the United States, but they produce 23 percent of all African American graduates.

Fifty percent of African American teachers graduate from HBCUs. Some HBCUs have struggled financially, but Brian Armstrong, executive director of outreach services at Texas Southern University, said he has seen an increase in funding during his 18 years at TSU, which has allowed for the addition new majors.

“We have an engineering program that we didn’t have five years ago,” he said. “… I think we’re going to be well-positioned over the next couple of years to better serve not just African American students, but students in general.”

The demographics of HBCUs have changed quite a bit over the years. Armstrong said that 80 percent of undergraduates at TSU are African American, but whites and Hispanics attend there as well.

To McDuffie, that is the beauty of HBCUs.

“When I go back to Norfolk State, it’s just a melting pot now,” he said. “You have everyone there now, black, white … But everyone gets that we are one. Even though it’s a historically black college, everyone is there for education, they’re there for cultural development and sensitivity, learning how to blend all cultures.”