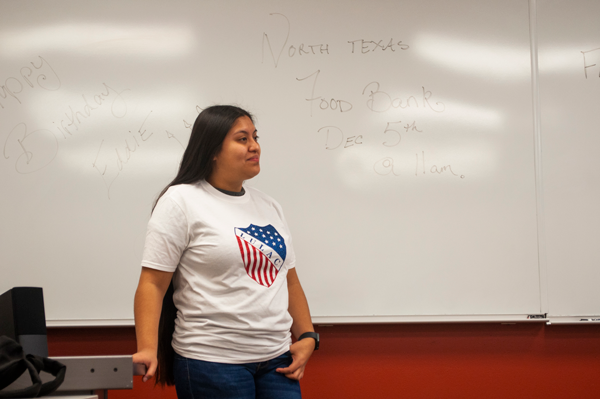 After an extended hiatus, the League of United Latin American Citizens has returned to Eastfield to promote the needs of the Hispanic community.

With the help of Professors Kat Reguero-Vandeventer and Tiffany Nacoste and president Blanca Alvarado, LULAC was restored.

The organization provides a platform for voices to be heard and support for students.Eastfield’s student population is 49% Latino. LULAC provides a community for Latino student activism and participation.

“It’s a surprising number of DACA students we have here,” said Reguero-Vandeventer of young adults who were brought to the United States as children and protected from deportation by an Obama Administration immigration policy. “Basically it’s a lot of your classmates that are scared that one day they’re going to be picked up and sent back to the country they came from that they had no decision in coming.”

For 90 years LULAC has been the largest and oldest Hispanic organization in the United States. LULAC strives to improve the economic condition, education, political influence, housing, health and civil rights of Hispanic Americans through programs based in minority communities.

The organization involves itself primarily with Hispanic groups.

Reguero-Vandeventer and Nacoste said that although the organization is primarily Latino students, it’s open to anyone.

While the organization is not new to the campus, it was inactive for two years due to the lack of student involvement.

Alvarado said that as a first-generation child of immigrant parents, she felt compelled to raise awareness of what is taking place within the Latino community.

“I am happy I can be a part of something that can bring so much awareness to what is going on as well as providing a safe zone for our students on campus,” she said.

“LULAC can add to that level of success, but it will also remind you of where you came from and who you are,” Reguero-Vandeventer said.

Sandra Caraveo, national programs manager for LULAC, started off as an intern when she was in college and moved up within the organization.

“Many people think the idea of success is leaving your culture and community behind and in a sense gentrifying yourself,” she said. “But LULAC teaches you that you can be successful and return to your community and fix what is wrong. Improving your own life doesn’t mean you have to forget who you are.”

People interested in joining can email Reguero-Vandeventer or visit the club page on the Eastfield app for more information.