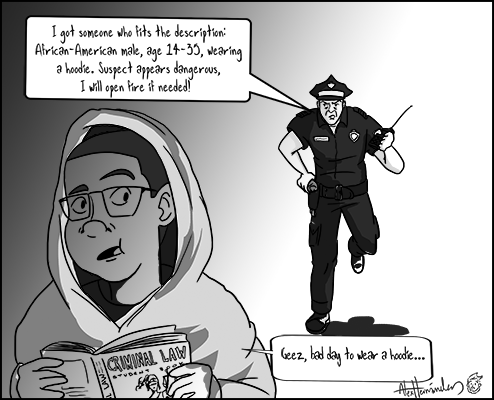 The Et Cetera called for reform to Stand Your Ground laws shortly after the murder of 17-year-old Trayvon Martin in 2012. These laws allowed Martin’s killer, George Zimmerman, to avoid being convicted even though he shot an unarmed teenager. We believed these laws were ripe for abuse, and today that abuse continues.

Stand Your Ground laws evolved from castle doctrine, which simply says that you have the right to protect your home without the duty to retreat.

However, applying these laws outside of the home is tricky.

Stand Your Ground laws say that if you perceive that your life is in danger, then you have the right to use deadly force to protect yourself. As we all know, perception is not always reality. These laws are essentially a license to kill. This is especially true for those who already have a predisposed fear caused by their own prejudices.

Zimmerman, then a neighborhood watch volunteer, initiated the conflict with Martin by pursuing the teenager on foot as he walked home, wielding only a concealed bag of Skittles. If anyone should have perceived their life to be in danger, it would have to be the unarmed Martin being pursued by an unknown armed assailant.

Fast forward two years. The negative attention toward Stand Your Ground legislation has brought to light the horrendous flaws within those laws, which are active in 24 states, including Texas.

The recent trial of 45-year-old Michael Dunn, again in Florida, echoes the controversy surrounding the Martin case. Last month Dunn was convicted of three counts of attempted second-degree murder for firing into an SUV occupied by four teenagers after asking them to turn down their music.

Although the conviction will land him at least 60 years in prison, Stand Your Ground laws could prevent Dunn from facing accountability for the death of the fourth victim, 17-year-old Jordan Davis. The jury was unable to reach a decision on the charge of first-degree murder.

Simply put, the law makes it easier to convict someone of attempted murder than murder itself.

Just months after a Stand Your Ground law was in place in Texas in 2007, Joe Horn successfully used it to murder two people who were robbing his neighbor’s house in Pasadena. Horn phoned 911 and reported the break-in, telling the operator that because of the law he now had the right to shoot the two men. With the police on the way, he pumped his shotgun and gunned down the two robbers as they were fleeing the scene.

Was Horn in fear for his life, or was he using the law as a basis to commit murder? The 911 tape is public record, so listen and judge for yourself.

These laws, while meant to protect citizens for defending themselves in the face of danger, really just make it more difficult to arrest murderers, let alone convict them.

Contact your local representatives and ask that these laws be changed. We, the people, must demand a change, or we will suffer more injustices in the name of fear and prejudice.