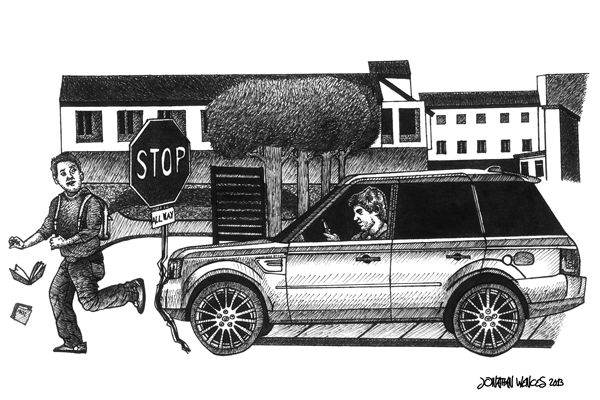 If you own a cell phone and a driver’s license, chances are you’ve texted at least once while driving. If not, you’ve likely witnessed someone else doing so.

According to a recent study conducted by the University of North Texas School of Public Health, texting while driving makes the average driver 23 times more likely to cause a crash than if he was only focusing on the road. Comparatively, talking on or listening to a cell phone only multiplies the likelihood of a crash 1.4 times.

In 2011 alone, 1.3 million crashes in America were the result of texting while driving, including an estimated 2,500 in Texas. With the number of smartphone users going up every day, that figure is only going to increase.

Many Americans don’t consider this to be a problem, but it is.

There is no excuse for texting while behind the wheel. Text messages can wait until the driver has come to a stop and left the vehicle.

By our very nature, we are unable to multitask effectively. Attempting to multitask while surrounded by scores of two-ton vehicles and long stretches of asphalt is inconvenient at best and fatal at worst.

Texas is one of only 32 states that prohibits novice drivers from using cell phone when behind the wheel. The state has also banned texting and phone use when drivers are in a school zone, or when they are driving a school bus.

However, only 10 states prohibit any and all cell phone use from drivers of all ages and experience levels. Texas isn’t one of them.

People who choose to text while driving are not only placing their own lives at risk, but the lives of everyone around them.

Looking down for even a moment could result in an accident that causes serious injury or even death.

No matter how well you think you are able to multitask, it is never safe to drive while distracted. No text message is important enough to endanger your life and the life of those around you.

Put the phone down. The text can wait.