BY KEVIN CUSHINGBERRY JR., EDITOR IN CHIEF Each spring, more than 100 studio art students get the opportunity to have one of their pieces displayed in the So Fresh juried student art exhibition. Art program coordinator David Willburn developed the name So Fresh — short for sophomore-freshman — for the exhibition....

By Danyelle Roquemore Alex Vazquez’s smile could light up a room. His friends found him funny, even a little goofy at times. His professors at Eastfield were impressed with the 18-year-old’s work ethic, believing it would carry him far in life. On March 13, the college community was rocked...

By Keturah Jones An Eastfield student has been suspended from the criminal justice program due to a road-rage incident in which he allegedly fired 15 shots into the car of another motorist. Leonard C. Young was arrested on March 25 and charged with aggravated assault with a deadly weapon after...

By Ginny Morris The search for a new Eastfield Harvester’s logo is underway. Copyright issues forced the college to discontinue using its previous logo last year. Last week, Director of Student Life Judy Schwartz hosted the first meeting of a committee of students, staff and faculty that will help...

Women speak through ‘Her Body, Her Words’ 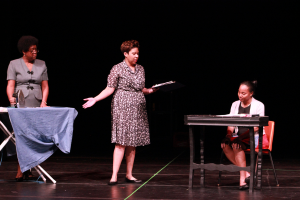 By Danyelle Roquemore Women have traditionally been overshadowed in the arts, whether it’s the way female characters are portrayed or the lack of famous female playwrights and authors. In honor of Women’s History Month, faculty and staff from the Arts, Language and Literature division performed...

By Sidney Murillo History professor Kat Cloer opened her Women’s History Month lecture by asking the audience what they thought feminism looked like. The feedback was far from positive. Bra burning, man hating and power hungry were among the responses. In an attempt to clear up these stereotypes...

By Sidney Murillo The bitter stench of vinegar and baking soda fill the first-grade halls of Thompson Elementary. Children murmur and squeal as the Eastfield Science Club members carry in boxes of beakers, liquids and vinegar. The club makes regular visits to the school to lead simple experiments...

By Claudia Guerra Ana Chavez was a high school sophomore in San Antonio when she and her group of friends first experienced the pain of being bullied by their classmates. Chavez and her friends were no different than any other clique at their school, except for one thing: They were attracted to people...

By Claudia Guerra In today’s technology-driven world, news can travel within seconds.When used irresponsibly, social media sites such as Facebook and Twitter can jeopardize important aspects of people’s lives, including their relationships, their finances and their careers. That was the focus...

Eastfield President Jean Conway has released a statement on the deaths of two students with Eastfield ties: We are grieving the loss of Eastfield student, Alex Vazquez, who was involved in the Mesquite tragedy this week and his sister, Paulina, who had been an Eastfield student prior to her transfer...

By Keturah Jones and Caitlin Piper The Eastfield College community was in shock Thursday after learning that two siblings with ties to the college had been killed in their Mesquite home. Alejandro Vazquez, 18, who is a first-year Eastfield student, and his sister Pauline Vazquez, 21, a UNT student...

By Chanel Jimenez Young athletes often don’t know what they’re going to do once their sports careers are over. The African-American and Latino Male Initiative club hosted a panel that discussed that predicament and how athletes are being prepared for life after sports during the program “When...

By Kevin CushingberryJr. A woman pulls out her camera and takes a photo of her dinner. She uploads the photo to Instagram, follows the restaurant on Twitter and likes it on Facebook, all in a matter of minutes. Those are just a few of the social media sites DCCCD Senior Web Editor Joanna Jordan...

By Anjulie Van Sickle Professor Danita Bradshaw-Ward worked with DNA sequencing and strands in newborn babies at Baylor Medical Center in Dallas for several years before coming to Eastfield to teach biology, anatomy and genetics. Now, she is able to use her experience to teach students the importance...

Star Party brings out the astronomer in students, staff

By Sidney Murillo In 1610, Galileo gazed into the abyss of the night skies through his telescope. He observed stars, the moon and even Jupiter and its four moons. On March 7, students had the chance to experience a similar view, thanks to the Texas Astronomical Society, which brought two high-powered... 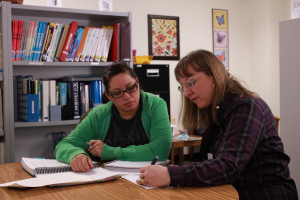 By Billy Dennis Recent administrative budget cuts have made it more difficult for students to receive the help they need in math. With roughly 75 percent of the school’s students being required to take at least one developmental math class, the tutoring center is arguably one of the most valuable...

By Billy Dennis President Barack Obama managed to avoid the sensitive subject of gun control during his first term, but it appears his second may be consumed by it. In the 75 days since the Newtown tragedy, the gun control debate has been discussed in every body of government and around practically...

By Anjulie Van Sickle About four years ago, TRIO director Bobbi White and program services coordinator Shatremeyia Porter discovered that some of their students’ grades were dropping. After some investigation, they found a disturbing cause for their struggles: Some students were going hungry. “We...

By Danyelle Roquemore Local artist Desmond Blair has learned that life is about accepting tough circumstances and figuring out how to overcome challenges. As a child, Blair faced many challenges at school. His classmates bullied him, and some teachers believed he was incompetent. “Because...

By Ginny Morris Esteban Hernandez was frustrated with being overweight. He had started multiple workout routines in an effort to lose weight, but never finished.  He was beginning to become concerned about his future health. “I would look in my kitchen and say, ‘Oh, that’s not right. I’m...

By Anjulie Van Sickle Despite common belief, men are not the only ones who had a major part to play in the civil rights movement. Women also had a significant role in the effort to gain equal rights for African-Americans. As a part of Black History Month, history professor Kat Cloer presented... 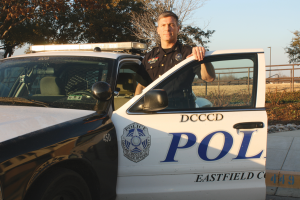 By Anjulie Van Sickle Michael Horak, who has worked in district police departments for nearly 20 years, has been named the college's police chief following an extensive search. He was sworn in at the beginning of the spring semester after one year as acting chief. “I had built a great command...

By Danyelle Roquemore The traditional process of being able to register up until the start of class was revamped this semester as the college added zone registration and an earlier cut-off date. The last day students could register for the full spring semester was Jan. 16, almost a week before classes...

By Anjulie Van Sickle When the campus lost power on the morning of Jan. 30, a few students saw it as an opportunity to run into Subway and steal several bags of chips. However, their plans were thwarted when campus police officer Miqueas Figueroa arrived on the scene. Police Chief Michael Horak said...

By Danyelle Roquemore It’s easy to believe that school shootings are rare and won’t happen here, but with the two most recent tragedies occurring within six weeks of each other — including one in Texas — the need for heightened campus awareness is at an all-time high. Some campuses are changing...

Ross sheds 39 pounds with motivation from her husband

By Sidney Murillo People don’t always eat to satiate hunger. Often they choose to eat for pleasure, taste or simply to relieve boredom. Those was once the case for Lose to Win weigh-in winner Amy Ross. Then she decided it was time to adopt a healthier lifestyle. “I’ve always been overweight...

By Justin David Tate More than 300 participants signed up for the college’s first Lose to Win weight-loss contest during the fall semester withiPads going to those students who lost the biggest percentage of their body mass. There were three winners–a female and male student and a faculty...

By Justin David Tate Eastfield is being forced to change its Harvesters logo due to trademark infringement concerns. In a letter dated Oct. 2, the University of Texas at El Paso (UTEP) asked the college to cease use of the logo, deeming it “remarkably similar” to UTEP’s own Miners...

Tech tools terrific for some, trouble for others

By Braulio A. Tellez Computers and the Internet have replaced the old blackboard and overhead projectors. Thirty-minute videos have replaced two-hour lectures. Technology has changed the face of the classroom, for better or worse. English professor Michael Morris believes tech-driven classrooms...