‘I just wanted to lick a door handle’: Students cope with mental health affects of COVID-19 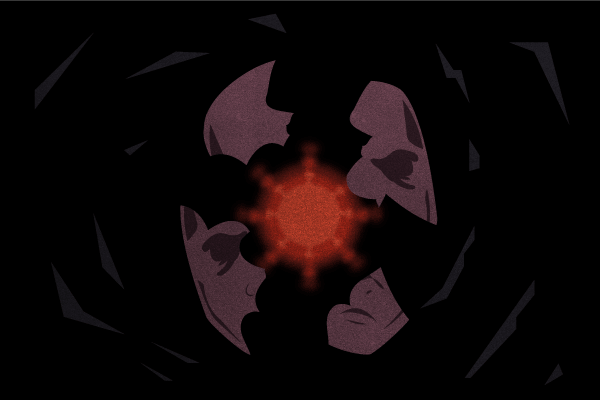 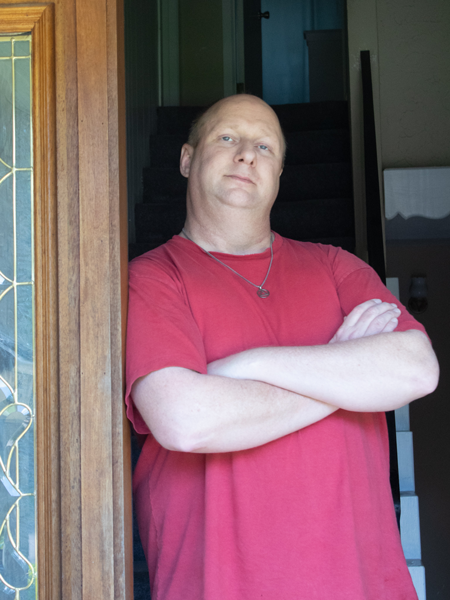 Social work major Jody Davis stands outside of his home in Dallas. He says when the pandemic first started he considered getting the virus as a form of suicide. Photo by Baylie Tucker/The Et Cetera

Jody Davis came a long way to get where he is. The social work major suffered a brain injury in 2016 that affected his short-term memory. He fought alcohol addiction and has been sober for over two years. He got into a sober living home over a year ago and is enrolled in classes.

Just as his world was starting to open up again, COVID-19 shut it back down.

“I just wanted to lick a door handle,” Davis said. “Get COVID and end it.”

He said he saw this coming much sooner than a lot of people around him. He watches the news religiously. The constant coverage kept Davis informed, but it also made him paranoid. As his thoughts spiraled out of control, isolation crept in and his depression grew worse.

“We’re definitely social beings,” he said. “We’re not necessarily capable of handling all this on our own.”

The pandemic sent Davis down a dangerous path. He was having serious thoughts of purposefully contracting the virus: suicide by COVID-19.

Luckily, Davis became aware of the problem and was able to find help with a psychologist before his mental state got any further out of control. His mental health is currently being managed and he’s doing much better.

“I can’t guarantee this evening will be good, or tomorrow,” he said. “But today is a good day.”

Two forms of sickness are on the rise. First, the obvious pandemic. Second, a steady rise in anxiety, depression, substance abuse and suicide due to isolation in the wake of the virus.

Four in 10 adults are reporting that increased worry and stress due to the coronavirus has negatively impacted their mental health, and 1 in 5 say it has had a “major impact,” according to a poll from the Henry J. Kaiser Family Foundation.

A report from the Texas nonprofit organization, Meadows Mental Health Policy Institute, shows a direct correlation between the pandemic and an increase in substance abuse and suicide.

According to their national projections, every 5 percent increase in the unemployment rate over the course of a year could mean 4,000 more suicides, 4,800 more deaths due to overdose and 600,000 more people who could be affected by addiction in general.

As of May 22, the Texas Workforce Commission reported the state unemployment rate is the highest it’s ever been, at nearly 13 percent.

Multiple reports have stated a rise in domestic violence in Dallas and throughout the country. Whereas there was an initial rise in phone calls to domestic violence service providers like SafeHaven, now there is a steady decline, leading some to speculate that victims may be trapped at home with their abusers. 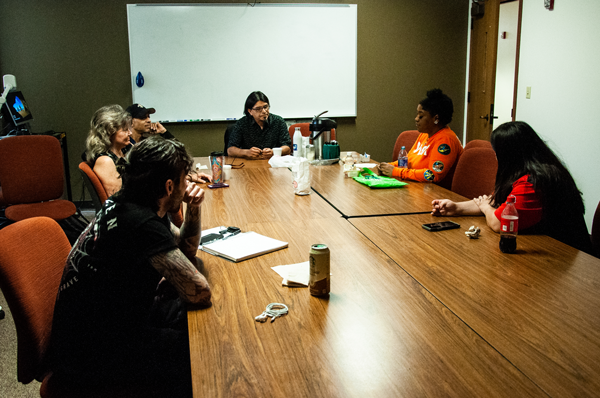 Substance abuse professor Daniel Ramirez, head of the table, leads a peer recovery meeting last November. Besides being a professor, he also runs a private counseling practice. He says it’s been difficult to do counseling with patients from home because they’re too comfortable. Et Cetera file photo

Daniel Ramirez, social work and substance abuse professor, is the owner of Real Solutions Counseling. He’s frustrated by the political divide in the United States. He said that right now the country doesn’t seem very “united,” and he thinks the political duality could be negatively affecting his clients.

When the shelter-in-place order was issued on March 23, Ramirez started operating his business through a virtual platform like many others in his profession. He’s noticed a shift in his clients since the change went into effect.

“They tend to get too relaxed,” he said. “It’s a totally different personality than what [they’re] presenting in the office.”

As a counselor, he’s concerned for multiple reasons. During his sessions, he has no way to know if anyone else is in the room or what they might be doing off-camera. On one hand, his clients are in the comfort of their own homes, allowing them to open up more easily and to show new behaviors. On the other hand, Ramirez is afraid that some clients are getting a little too comfortable.

He’s even had to end sessions early because clients were smoking marijuana or drinking during their virtual time together.

“That wouldn’t happen in my office,” he said. “That’s why we typically don’t do therapy in people’s homes.”

Ramirez, who also offers couples counseling, has seen some relationships deteriorate due to isolation. Without the simple comfort of going to a bar or restaurant, some couples have turned to lashing out at each other instead.

He said this behavior is most likely a reflection of unresolved problems that existed before COVID-19 came into the picture. The virus is simply acting as a catalyst to bring those problems to the foreground. 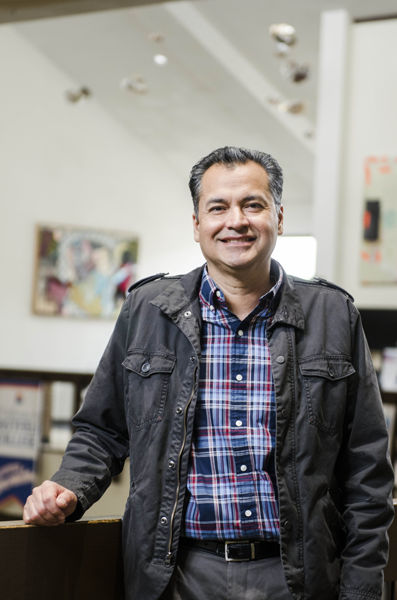 Jaime Torres, mental health counselor at Eastfield, says the pandemic can lead people to feel like their lives are “spinning out of control.” Photo courtesy of Eastfield College

“When we experience the feeling of a lack of control, it then manifests in increased anxiety, maybe feelings of panic [or] feeling hopeless,” Eastfield mental health counselor Jaime Torres said.

Torres said many people feel as if their lives are “spinning out of control.” Feelings of helplessness have the potential to affect other parts of an individual’s life and can manifest in peoples’ relationships, school or work.

Torres said that a lot of people are only focusing on the impact on those who have lost their jobs. However, he feels like the stress of those working from home and trying to manage their families is being underappreciated.

The problem, said social work major Mike Lara, is that isolation brings our unresolved issues to the surface. Without the distraction of a normal routine in our daily lives, people are having to adjust in a whole new way.

“A lot of people don’t have coping skills right now,” he said. “And they’re stuck at home trying to figure out what the hell to do.”

Lara, his son and daughter, his husband of 6 years, Marty Watts, two grandchildren and a grandfather have all been living under the same roof since the pandemic hit Texas. Before the shelter-in-place order, Lara “liked to keep the road hot.” He was always running around from one place to another. He said it’s definitely been an adjustment for him, but his life certainly hasn’t slowed down either. As a full-time student trying to manage a family, he’s noticed that he’s been a bit more on edge, especially when everything first started.

He’s been able to work through it, though, with the help of a support system he had in place well before the pandemic hit. Lara suffers from bipolar disorder and has been an addict in recovery for almost four years now. He’s thankful for coping mechanisms he already learned before COVID-19. Whereas a lot of Alcoholics and Narcotics Anonymous programs are still operating through a virtual platform, he can’t imagine the struggle of someone trying to rid themselves of an addiction during this time.

“That’s not the same as me sitting face to face with you, being able to empathize with you,” Lara said. “Being able to put my hand on your shoulder and say, ‘It’s gonna be OK.’”

Lara regularly talks with new group members as part of his recovery, and he’s worried. He said that a phone can weigh 500 pounds for a new member when it comes to calling for help.

He understands the necessity for social distancing but dealing with someone’s newfound sobriety over the phone is a huge adjustment. 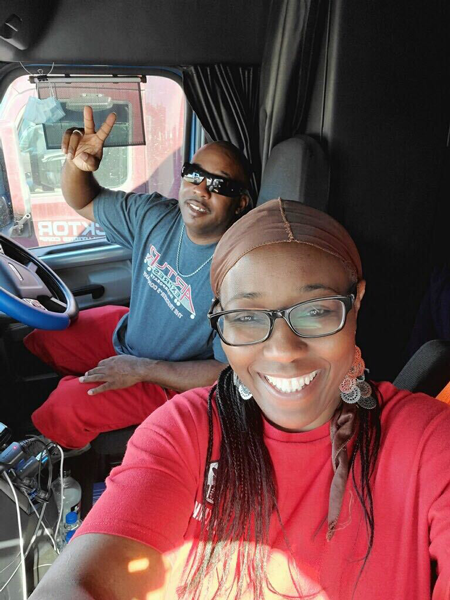 Social work major Twana Miller experienced a stir-crazed period when the pandemic went into full swing.
She said she was fortunate to be able to work from home, but staying cooped up every day nearly drove her out of her mind.

“You can only go to Wal-Mart so many times a day,” she said.

Miller estimates she would go to the store anywhere from three to five times a day just as an excuse to get out of the house. She even became friends with several cashiers. Finally, she couldn’t take it anymore.

She decided to hit the road with her husband, truck driver Robert Miller. They went everywhere from Oklahoma and California to the Arizona-Mexico border.

They stopped for takeout several times, and she noticed that other states were being much more stringent when it came to protective measures.

She said most businesses in California would refuse service to anyone not wearing a mask. At truck stops along the way, she noticed that she wasn’t the only person traveling with a partner.

“You might be surprised how many women I’ve seen,” Miller said. “Not just women drivers, but also just riding with their spouses. … Just to be with their spouse, be together and to make a little money.”

Before she left, Miller said she couldn’t sleep. However, with all the comforts of home crammed into the cabin of a semi and the sway of the road gently rocking her back and forth, she said it’s the best sleep she’s gotten in a very long time. 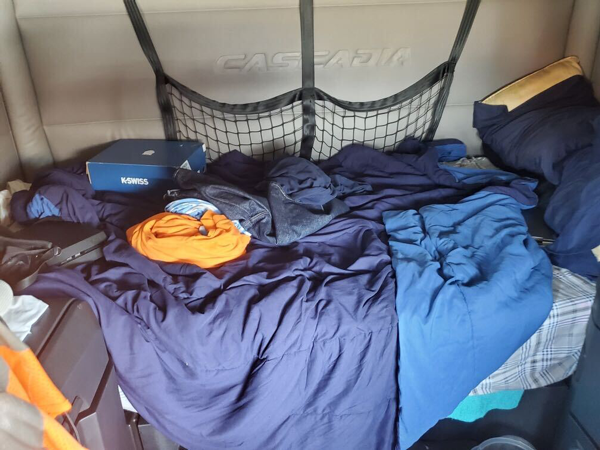 Twana’s bed in her husband’s truck. She says it’s provided the best sleep she’s gotten in a while and “feels like a waterbed.” Photo courtesy of Twana Miller

“It’s very comforting sleeping on the truck,” she said. “This may sound crazy but sleeping in [my husband’s] bunk almost feels like a waterbed because of all the motion when he’s driving.”

Miller isn’t the only one who has been able to find a silver lining in the pandemic.

Ramirez has also found hope through some of his clients. He said some families are really using this time to come together.

“Take advantage of the opportunity that we have to be able to take walks without the burden of having to be somewhere right now,” Ramirez said. “Take the time to finish some personal projects. Focus on a lot of self-promoting, self-educating kind of stuff. This is a great opportunity.”